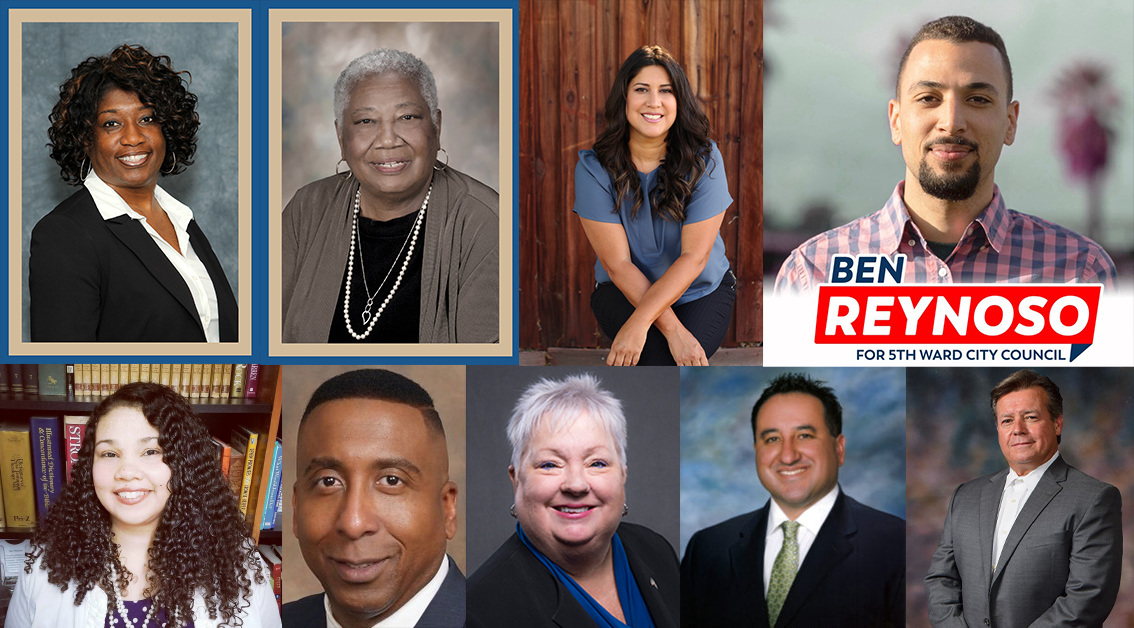 Each participant was invited to make a three- to five-minute statement about their candidacy.

Rosales-Medina began, “It is important to elect someone to represent the community’s needs.” Her key priorities include working to eliminate disparities in education for minority students and closing the school to prison pipeline in addition to prison reform and environmental justice.

As an experienced politician, Baca shared, “I have a pulse for the community. I understand it and the importance of building relationships with cities within the county. “I’ve matured politically,” he assured. “I made my mistakes and paid for my mistakes. I would be honored to have your support.”

Retired federal agent Alexander stated, “I am not on Mayor Valdivia’s team. . . I am on the team of San Bernardino.” He believes the city should “let the private sector do what it does best. We have to stop making it difficult for businesses to start in San Bernardino.” He also has a long-term plan to address the city’s homeless problem called ‘Wrap Around 360.’

Reynoso began his career as an organizer at the age of 15. He is concerned about the planned Amazon hub at the San Bernardino Airport. “It’s beyond the racial breakdown about who is getting employed here,” pointing to the company’s high employee turnover rate and the large number of temporary employees from outside the city. “I’m running to tell the blatant truth. How do we retain people if career employment does not exist?” He wants a proactive development strategy that includes a community benefits’ agreement ensuring people from the city are hired first.

Hill is an incumbent. “I’ve had nine wonderful years as a school board member,” she shared and pointed to student progress including a graduation rate in the 90 percentile and more students attending four-year colleges. “We are training students to go into law enforcement and reengaging our parents,” she offered. She hopes to continue working to ensure everything is equitable for the students.

A first-time candidate, Lee explained he was motivated to seek public office to help build a better community for his children. “I have four daughters,” he shared, adding that one of the ways he wants to safeguard his family is by helping to protect water rights for them, the community and for future generations. He is an advocate for greater water agency transparency.

Garnett owns a consulting firm, has authored two manuals, and teaches as an adjunct professor at Cal State San Bernardino. Fifty percent of students in Upland are on reduced lunches. His goal is to pull resources together from his years of experience in child welfare, branch out and work more with the business community. He wants to overcome challenges faced by students who cannot get online because they have no laptops or access to internet hot spots.

Stacy Augustine has decades of experience in both the public and private sectors and is no stranger to public service. If elected, he would direct his efforts to addressing issues of homelessness, living-wage jobs, and ensuring access to services for seniors among other priorities.

An educator, Clouser is seeking public office for the first time. Her goals include supporting collaborative efforts with key stakeholders; addressing issues related to the budget; and issues of equity for all students. She is seeking office not to become a lifelong politician, but to encourage others to get involved.

Laura Abernathy Mancha is a nine-year incumbent. She is not an educator and started her political career as a mom who had an issue with school police. “I did not think they should have guns,” she explained. She pointed to equity and the digital divide as two major issues confronting the board.

A retired Police Chief Michael Taylor, also a former city manager, has served as a member of the West Valley Water District Board since 2018 and is committed to delivering affordable, safe, clean water to the community. If elected his priorities include issues of public safety, responsible community development and fiscal accountability.

After the candidates’ presentations, they responded to a couple of audience questions beginning with a question about the lack of diversity in city staff, hiring executives from outside and how they would hold the new city manager accountable for such decisions going forward.

“I am bothered by the city manager coming in,” replied Reynoso. “We need more people of color.”

Damon Alexander answered, “Make my agency look like America. It starts at the top. If we don’t look and lead and say, ‘Hey, we want diversity in our city heads.’. . . We need to be at the table to ensure it happens.”

The candidates were also asked where they stood on Proposition 16 which calls for the repeal of Proposition 209 that ended Affirmative Action in California. All the candidates except Ben Reynoso expressed support for the measure.

St. Paul AME Church Social Action Committee encourages everyone to watch their social media feeds for the next forum. It will explore the propositions on this year’s ballot.

S.E. Williams is Managing Editor of the IE Voice and Black Voice News.