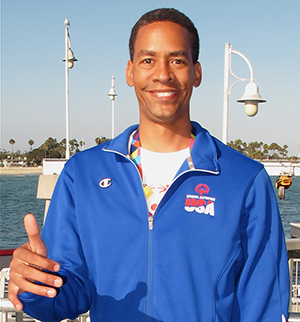 Special Olympic athlete Terrel Limerick at the docks in Long Beach as he gets ready to compete in Level 5 Sailing.

On a California summer day, off the coast of Long Beach, prolific Olympic athlete, Terrel Limerick takes on the elements and the world, in pursuit of excellence.

Among the 7,000 athletes who traveled to Los Angeles to compete in this year’s Special Olympic World Games, Limerick is no stranger to athletic competition. Competing at the highest level, on the world stage, he remains cool, calm, and focused. His easy smile only masks the fierce competitor within.

Limerick’s field of play for these games is the vast and unpredictable Pacific Ocean. His chosen vessel is the 13-foot Laser. A level 5 solo class sailor, Limerick is comfortable on the water. Among the five sailing classes, he chose a challenging boat class that rewards speed, agility, and the ability to think quickly.

Limerick is an extraordinary athlete who competed in several Olympic Summer and Winter games. For these World Games in Los Angeles, he chose a vessel that reflects the courage and athleticism that naturally pours through his veins.

A casual observer who may have stumbled upon any of the races this past week, gazed out at the racing course and noticed Limerick’s speed and style. He just catches your eye. As his laser sharply rounds each Olympic buoy, you can catch his infectious smile, but don’t let that fool you, Limerick has just passed you by.

Prior to the Opening Ceremony, ABC’s Robin Roberts ran a touching piece on Limerick and identical twin brother Joel. Each brother has accomplished much in their own right. Brother Joel, a Morehouse College graduate, is currently the President of Document Systems Inc., where he oversees business development. They are very close.

Limerick has earned over 100 gold, silver, and bronze medals during competition in both Winter and Summer Olympic games. Among the various sports are: basketball, alpine skiing, cross country skiing, kayaking, sailing, track & field and bowling. He is also an actor in his spare time.

During one of the preliminary Olympic sailing rounds, the water off Long Beach had become particularly rough for any experienced sailor. This particular afternoon would prove to be Limerick’s greatest test of will, the ocean itself.

After his Laser was tossed and flipped by 18- knot wind gusts four times, Limerick offers this observation, “The first time I flipped over it was really hard to turn my boat over. The second time it was hard too and I was getting colder. The third time it was really hard to turn it upright because I was getting tired. The fourth time was good for me because I learned something. So I think the first three times were ok because that’s the way I learn.” 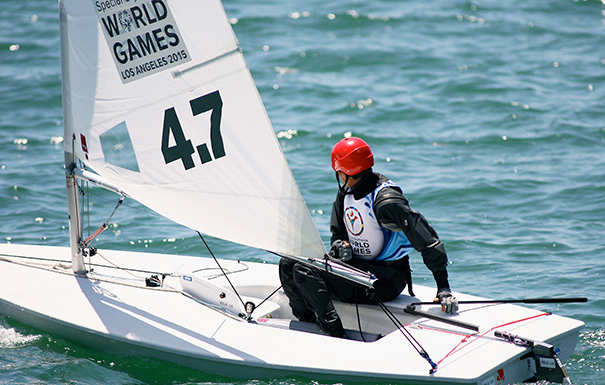 Olympic Sailing – Long Beach provided the venue as Olympic sailor Terrel Limerick navigates his Laser around the course. Limerick has earned over 100 medals in both the summer and winter Olympic games. He earned the Bronze Medal in his sailing class last Saturday.

Limerick is determined to be successful. It doesn’t matter to him that the mighty Pacific Ocean threw him a curve ball during Olympic competition. It is in his DNA to overcome adversity and handle difficult situations with a smile on his face. The smile that comes from the knowledge that he’s been through this before.

On Saturday, Limerick was awarded the Olympic Bronze Medal for Level 5 Sailing in Long Beach. After the closing ceremony on Sunday, he flew back to Washington D.C., where he works in the Special Olympics International office. Limerick also participates in the ‘Athletes Leadership Program’ where he enthusiastically takes on the role of ‘Olympic Ambassador’ to businesses and schools.

For Limerick and so many thousands of his fellow Olympic athletes, the closing ceremonies are not a curtain, but rather a celebration of the resilient human spirit. These Special Olympic Games were the dream of Eunice Kennedy Shriver, many years ago. And currently chaired by her son, Tim Shriver who now carries the torch.

“Through athletic competition our Olympic mission statement is rooted in the values of love, hope and opportunity.” Eunice Kennedy Shriver

“I want people to know that my disabilities will never keep me from being a successful person at work, at sports, or in life” – Terrel Limerick, Olympic athlete.