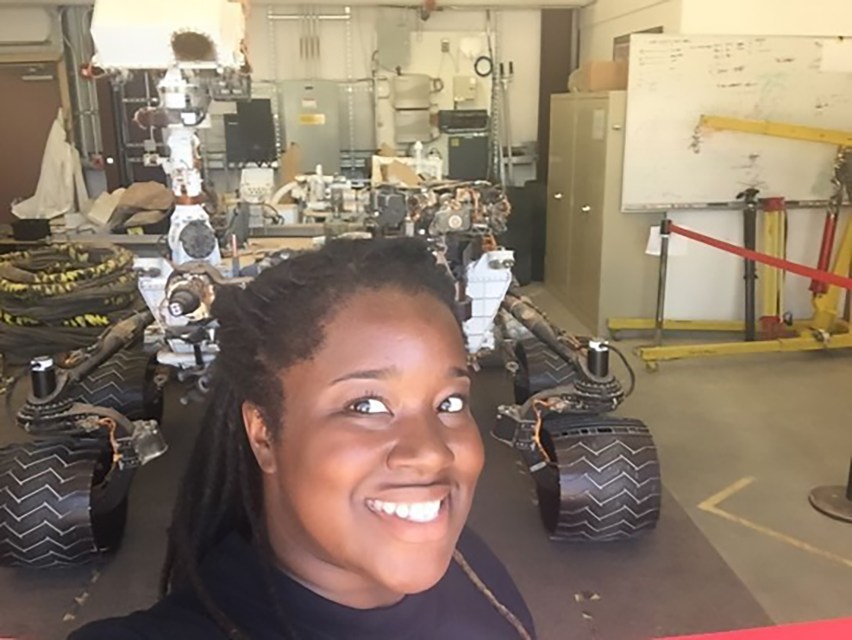 It comes as no surprise a woman whose name translates to “thank you God” would be commissioned to help reconstruct education for underserved youth.

It is her calling of choice.

Nwaomah, 32, born of Nigerian descent, is the youngest of four from a small town in Missouri on the Northside of Kansas City.

She lost her father at just 2 years old and watched as her mother, a nurse and administrator at Family Clinics, rose every morning at the break of dawn in an unwavering effort to put all of her children through college.

She remembers her mother steering her toward becoming a nurse, doctor or lawyer, but she instead decided to stay true to her passions in music and science.

In reflection and acknowledgment of her mother’s work ethic, Nwaomah took no days off to achieve this.

NASA, Mars Rover, and an Out of This World Experience 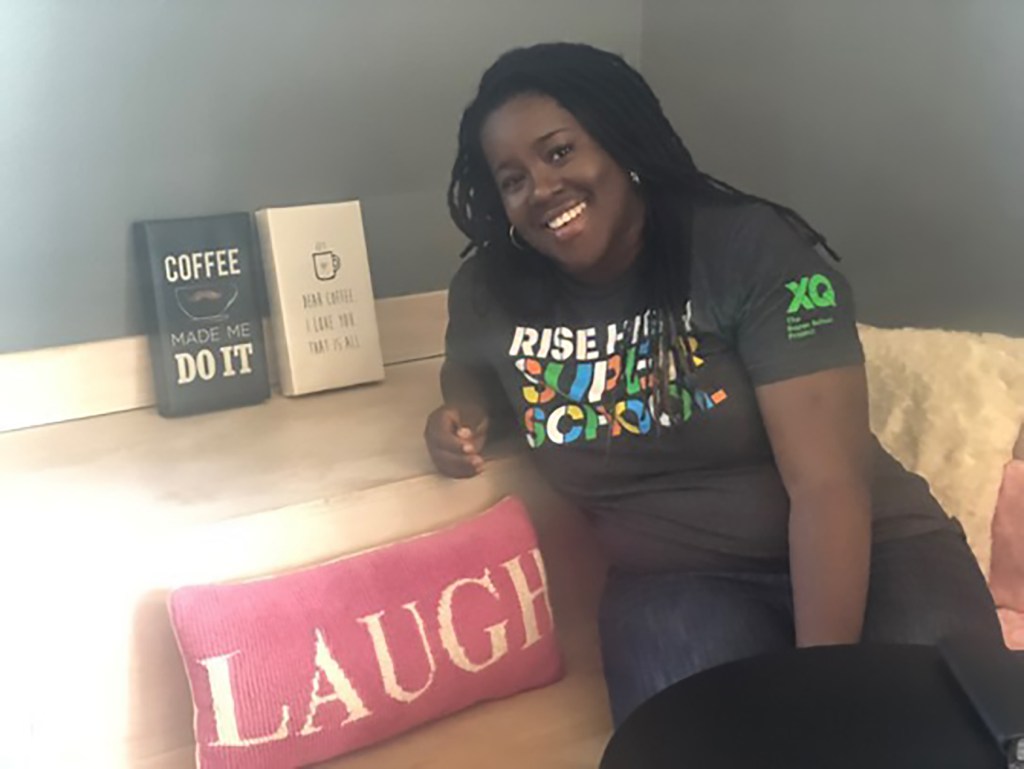 Meika Nwaomah is the founder of the science curriculum at Los Angeles XQ Super School, Da Vinci RISE High. Her philosophy with education is to “ignite her students’ experience with science while discovering real world applications.”

In the summer of 2015, as a Noyce Scholar, Nwaomah was awarded an internship opportunity at NASA’s JPL through the STEM Teacher and Researcher (STAR) Program. Mentored by Ken Williford, astrobiologist, ABC Lab director and deputy project scientist, Michael Tuite isotope biogeochemist, and Adam Steltzner, Chief Engineer, helped educate her on the importance of the Mars 2020 mission.

Her role at NASA was to assimilate field notes, images and data analysis, and translate their findings into science journals. She worked alongside her fellow interns carrying out experiments to find traces of organic material from samples. In turn, researchers could continuously contribute as they collected samples from natural environments and for future space exploration.

She was selected to work with a group of women from all ages, ethnic backgrounds and disciplines. Calling themselves the “FATgirls,” derived from their studying fatty-acid samples. Nwaomah emphasized the importance of having a strong diverse network and the impact it had on her own life.

They were invited to several talks throughout the summer internship, and were elated to meet the women who worked in NASA’s laboratory whose stories they saw in Hidden Figures the following year.

Nwaomah understood working side by side with a diverse group of women on a project this grand was awe-inspiring. 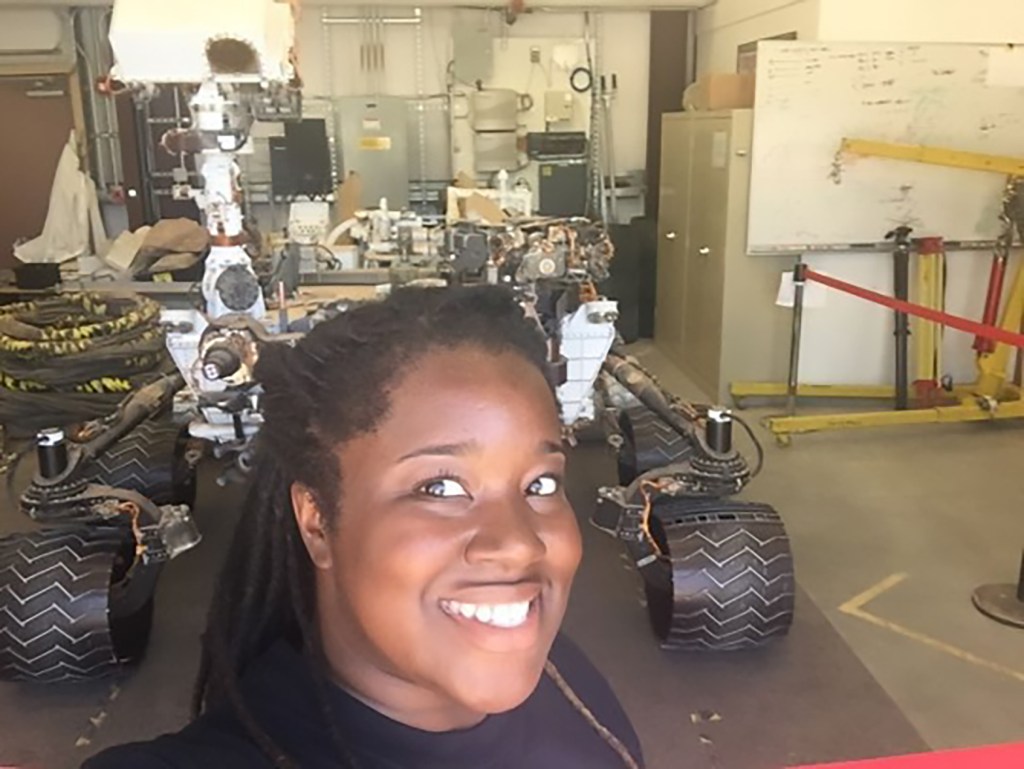 “Capturing history in front of the First Mars Rover presenting the history of a diverse group of women.”

“It was huge. We all knew how important that was, and we would talk about it all the time,” she said. “It was just one of those things for me to just take that experience back and say I was a part of that — I’m a part of history.”

Innovation in STEM Education–Giving Back to the Community

Her parents, although not always present, did well to surround her and her siblings with strong Black, Nigerian and African women and men that became family and role models guiding them toward higher education.

Nwaomah is now the founder of the science curriculum and current career development and science teacher at a Los Angeles XQ Super School, Da Vinci RISE High, a learning site that meets the unique needs of youth navigating foster care, housing instability, probation, and/or other circumstances that have caused disruptions in their academic journeys.

Nwaomah’s philosophy on education is to “ignite her students’ experience” by encouraging them to stay true to themselves and help build their understanding of how science is juxtaposed in real world applications.

She Followed Her Passion

She looked back on a transitional moment in her life when she continued pursuing music.

Nwaomah had moved to California to live with her uncle in Riverside, and promised herself to find work in music while participating in her summer internship.

“I laughed at my mom, because she’s like, okay, you can be a science teacher. This is good. And I was like, okay mom, but you know what I’m going to do when I go [to] twork out there, I’m going to use my music degree,” she remembers telling her mother. “I just told her I’m going to get jobs in music. So that I don’t feel like that [music degree] was a waste.”

Nwaomah’s main source of income, at one point in her life, came from various institutions practicing as a music instructor. Achieving both science and arts degrees, she demonstrated the ability to gain success by following one’s passions whilst still obtaining professional credentials.

She continues to raise the bar for underserved students, and is motivated by helping Black and Brown students recognize opportunities are not limited to them because of the color of their skin. Using education as a force to counteract the disparities or challenges they often see.

Despite trials and tribulations she encountered throughout her own life, experiencing racism at her North Kansas City elementary school being the only Black family at an all White school and being placed in remedial classes, recovering from a detrimental car accident, and the death of her father, she never allowed herself to stop pursuing higher education.

Nwaomah shared how she was able to overcome her disparities by choosing joy as her choice of medicine.

She wants to be recognized as a Black woman that is “killing it” in science.

“No matter what has come my way, I have overcome, and that fueled the legacy that I leave behind,” Nwaomah declared.

Through a series of opportunities and daring action, Nwaomah never missed a beat. She continued to transcend in every aspect of her life, inspiringly and wittingly accomplishing everything she wanted, while still giving back to her community as a teacher.