Will there be a new sheriff in town? 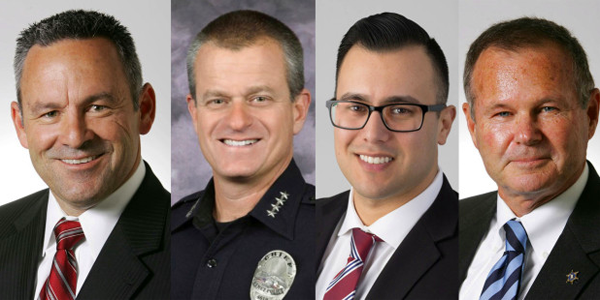 The Voice/Black Voice News reached out several times to challenger Brown and requested an interview for this story without success.
According to Brown’s website, “The Riverside County Sheriff’s Department is in crisis!” He claimed this caused him to become gravely concerned for the safety of every person in Riverside County as well as the brave deputy sheriffs working hard to keep members of the community safe in unsafe conditions.

Brown further claimed Sniff has lost the confidence of his own troops and has systematically and categorically destroyed the effectiveness of a great organization. Brown further asserted Sniff has had ongoing conflicts with the County’s Board of Supervisors.
According to his posting, Brown sees himself as uniquely qualified to restore the Riverside County Sheriff’s Department due to his years of proven executive leadership experience and points to his being from outside the organization as an enhancement to his candidacy.

Additionally, The Voice/Black Voice News contacted the Riverside County Sheriff’s Department City of Moreno Valley Station and sought an interview with candidate Garcia. As of press time Garcia had not responded to the request.

On his campaign website Garcia claimed the Riverside County Sheriff’s Department suffers from inequality between employees, a lack of supportive leadership, budget constraints and minimal staffing. He further claimed as a result, morale in the department has hit an all-time low. Garcia argued these assertions have an impact on the citizens of Riverside County.

Lieutenant Chad Bianco, a 25-year sheriff veteran currently assigned to the Hemet Station, told The Voice/Black Voice News he believes the department is currently deficient in three basic areas. First, according to Bianco, the department is not providing the service it should be for the money it is spending. Next, he claimed the department is losing sheriff deputies and morale is at an historic low. And finally, he described the way the department provides service as reactive instead of proactive.

Bianco unsuccessfully challenged Sniff in the 2014 election and said his talking points are the same, and said, “It’s amazing nothing has changed in four years.”

Bianco expressed his belief the department can effectively provide service to the community in a way that obtains the highest use of tax dollars through neighborhood watch programs, through community-oriented policing, recruiting and encouraging more citizens to join as sheriff volunteers and increasing the department’s reserve force.

Bianco described the area covered by the Riverside County Sheriff’s Department as having a very large land mass with a very large and diverse population, with every city, community and neighborhood having different quality of life issues.

For example, according to Bianco, the Eastvale community is being ravaged by daytime burglaries and vehicle thefts while some places in Perris or Moreno Valley or even some desert communities have gang problems. Farm communities on the other hand, have a huge problem with the theft of their equipment and rural areas are experiencing drug cartel, marijuana related, grow problems.

“We have various issues throughout the county that, for that neighborhood, is their quality of life issue,” Bianco observed. He noted how in one community, their homelessness issue might be just as important to them as their gang problem.

So, by far, a much more personal relationship with the community, an active involvement within our neighborhoods, our businesses, our churches, our government, our everything [is needed],” Bianco explained “to basically improve our quality of life in our neighborhoods.”

In an interview with The Voice/Black Voice News, Riverside County Sheriff Stan Sniff, who has served as the county’s sheriff since 2007, explained he has been battling with one of the four unions within the department. According to Sniff the union has pushed against him since he implemented body cameras, insisted on blood testing after officer-involving shootings, placed enhanced demands on accountability, installed Global Positional System (gps) devices on patrol cars, promoted transparency with the public and stayed true to the position that sometimes you have to tell the union “no” when the department is faced with tough fiscal problems.
“Sometimes you have to be an adult and face hard choices,” Sniff insisted. He confided that that one of the unions threatened to have someone run against him in response to his actions to hold his department accountable. He described this response as sour grapes and noted how a small group wants him replaced.

Regarding other progress, Sniff touted his embrace of diversity within his department and the citizens he serves even though he described himself as “pretty conservative.” He further highlighted his efforts to recruit a diverse staff and noted how the upper ranks of the Riverside County Sheriff’s Department now reflects all the ethnic groups it serves.

Regarding the budget, Sniff acknowledged the department’s budget was cut a total of $72 million in two years. This led to a reduction in workforce and placed terrific pressure on his department as the county’s population continued to increase. When asked to describe his biggest challenges, Sniff pointed to staff shortages due to successive reductions in the budget. Despite the budget cuts, however, he described the department morale as good.

Sniff highlighted the awards his department has be awarded for community policing without money and acknowledged it was hard to do. Also, under his leadership, crime has dropped, an indication Sniff claimed—that he is doing a good job.
Sniff described himself as the most accessible Sheriff to serve Riverside County residents in decades. He takes time to talk with and listen to community groups, both big and small, and willingly weighs in on public safety topics and public policy deliberations.

“No other candidate in this election has the range and experience honed over many years through all the different levels of one of California’s largest law enforcement agencies,” Sniff concluded.