Why Repeated Efforts to Destroy the Affordable Care Act?

This week we learned President Trump through the efforts of the U.S. Attorney General is once again laying out a case to eliminate the Affordable Care Act.

Why would the leader of any nation, especially the leader of the United States of America, work so aggressively to deny health care to 133 million of its citizens with pre-existing conditions? Why would any leader fight to strip affordable health care coverage from tens of millions of others or deny access to millions of seniors on fixed incomes to a plan that lowers the costs of their prescription drugs?

From a purely political perspective, these questions raise even greater curiosities when considered in the context of Affordable Care Act enrollment as recorded in 2018, which proved more of the people enrolled and benefiting from the plan actually reside in states won by Donald Trump.

Some have argued when the 2017 tax cut effectively eliminated the Affordable Care Act’s (ACA) individual mandate penalty by reducing it to zero, it set the stage for the unravelling of the law. Attorneys General in Republican led states are arguing in court, the law effectively neutered the legal justification for the ACA’s individual mandate, which was the pillar the U.S. Supreme Court used in 2012 to uphold the constitutionality of the ACA under the federal taxing power.

California Attorney General Xavier Becerra is leading a coalition of 20 states in an aggressive and valiant effort to defend the ACA, arguing that despite the congressional reduction of the mandated penalty to zero, the individual mandate itself remains as constitutional as ever. They further argue, even if the courts determine to strike down this aspect of the act, the ACA could stand independent of it. 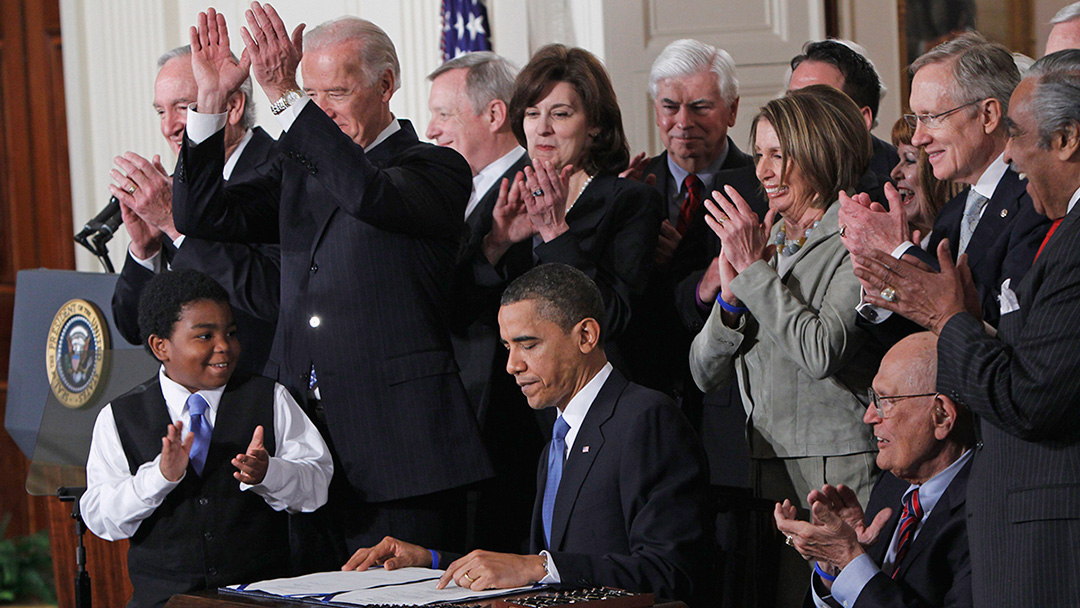 I believe the administration’s argument over the law’s constitutionality is as much a trojan horse as the other thinly veiled assaults against the law tied to costs, choice, etc. The arguments appear to be more deeply rooted in a class-based  philosophy that prioritizes profits over patients, a corrosive, political ideology further exacerbated by the racial bitterness clung to by  those in this country who continue to smolder in anger over the election of the nation’s first Black president—a resentment further enhanced by the undeniable reality of a shifting demographic that will soon place the current majority in the minority, something already a reality in parts of the country.

Why are some so frantic about the nation’s shifting demographics? After all, most of the world’s population are people of color…is this why the president is working so aggressively to restrict border crossings, limit immigration from dark countries, deporting Black and Brown people?  Was the audacity of a Black man who sought and attained the nation’s highest office, America’s first Black President Barack Obama, too much for some to acknowledge and/or accept?

Is there a smoldering resentment related to Obama’s leadership acumen that enabled him to achieve the goal of making healthcare available to millions, a goal many presidents had attempted for more than 60 years to achieve and failed?

Is there lingering anger over Obama’s ability to accomplish this despite every trivial trick and obstacle, lie and slander deployed to derail his efforts? Is their indignation inflamed by Obama’s ability to outwit them even though Republican congressional representatives took an oath to fight him on every issue and at every turn; even after they sat at the table and pretended to negotiate in good faith, slowed the process and offered innumerable amendments only to have their deceit fail in the long run when the ACA passed without a single Republican vote in either the U.S. House of Representatives or the Senate?

Since that time, Republicans have worked overtime to sabotage the ACA with more than 70 legislative attempts to undo it  while at the same time, Republican state attorneys general have pushed court case after court case to bring it before the U.S. Supreme Court for a second chance to destroy it, totally ignoring the health needs of their own constituents who depend on it? Once again, I must ask why?

Trump earned his political stripes by perpetuating an overtly racist, birther-ism theory. And, since taking office he has done everything in his power to undue as many of Obama’s accomplishments as possible, while his primary goal, the destruction of Obama’s signature accomplishment—the Affordable Care Act—has continued to elude him.

The mission of the president and his congressional sycophants to erase Obama and his accomplishments from the pages of American history appear no less than the described efforts of the Pharaoh Rameses to remove Moses from the annals of history.  I’m not comparing Obama to Moses by any means nor Trump to Rameses (even though he thinks he’s a king), just using the story as an example. It is as if Trump has said, “Let the name of Obama be stricken from the congressional record, from every book and electronic tablet, from every web page and twitter feed, stricken from every monument of America. Let the name of Obama be unheard and unspoken, erased from the memory of men for all time.”

Despite the stories’ similarities in that regard, there is one key difference between the actions of Rameses and those of Trump. Ramses was largely driven to such action out of a sense of having been betrayed by someone he deeply loved; Trump on the other hand, is motivated by a love of self, by his own self-aggrandizement, racial hatred and a mindset of White Supremacy that he believes, gives him the right to dismiss/disregard/diminish the accomplishments of a Black man—I would argue—who is by far his intellectual superior in many regards, including leadership.

Just as Ramses failed in his attempt to bury the accomplishments of Moses, I predict Trump will fail in his attempt to erase the successes of Obama. Trump is certain to go down in history for his overt racism, misogyny, avarice, corruption and criminality. While history will remember Obama for his timeless composure, inclusiveness, integrity, compassion and efforts to care for the least among us through his signature accomplishment—the Affordable Care Act.

Of course, this is just my opinion, I’m keeping it real.