What Story Are We Writing? 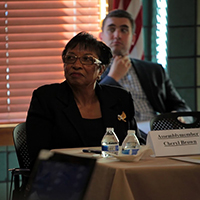 Friday morning I rushed to the Historic Santa Fe Depot in San Bernardino to make an appearance at the Trucking Summit, and no it wasn’t “a herd of 18-wheelers together in a parking lot atop a mountain summit” as one friend jokingly commented. Hosted by Assemblymember Cheryl Brown, the event brought together leading authorities in the industry to discuss financial opportunities for drivers and featured a keynote address by Assemblymember Jim Frazier, chairman of the Assembly Committee on Transportation. It also featured presentations on environmental regulations by representatives from the Air Resources Board and South Coast Air Quality Management District, and comments by individuals representing different facets of the goods movement economy from independent truckers to distribution center owners.

Click here to see more pictures from this event.

As I pulled into the parking lot and parked my car, my eyes drifted over to the rainbow of shipping containers that served as the backdrop for the morning’s discussion. “Every region has something to offer to the state,” one of the panelist commented. “Our contribution is logistics.” (One of my other friends calls “logistics” a misnomer.) What it often means here is warehousing of goods that come through the ports of Los Angeles and Long Beach. Eighty percent travel through our region, either by truck or by train. “We’ve been briefed that there will be three times more cargo coming through the ports in the near future,” Assemblymember Frazier reported during his keynote address, as the train whistle drowned out every other word.

As the growing number of distribution centers suggests, these goods will increasingly flow through our communities, and will be sheltered and housed here, as we become Southern California’s “backlot” as a recent New York Times article characterized the tens of millions of industrial space we currently have overtaking our landscape and the tens of millions currently under construction. And with the unceasing flow of goods comes environmental impacts that have already negatively affected our air quality, our ailing and neglected transportation infrastructure, and the quality of our jobs. The South Coast and the San Joaquin air basins are two of the worst air basins in the entire nation, with the American Lung Association giving both San Bernardino and Riverside Counties failing marks in its State of the Air 2015 report. And the largest proposed logistics project recently approved by one city is already facing lawsuits for its failure to adequately address environmental and infrastructure issues.

Yes we are the “gateway” to the east coast, but we are also selling our land and ourselves cheap. And at a cost that some of us consider “priceless”…a healthy future and good quality of life.

Later that evening, I attended the kick-off event for Inlandia Institute’s Marion Mitchell-Wilson Endowment. As I stood on the rooftop of the Riverside Art Museum with the sound of the train whistling in the distance, I thought about the mission of the organization to encourage literary activity in the Inland Empire and I asked myself, “what do we want our story to be? What is our plot? Who are our protagonists? Are we simply a “backlot”? A staging area? America’s storage unit? Is the narrative we’re writing one of approving project after project without regard for future environmental impacts, or reliance on one sector – one that has traditionally produced a proliferation of low-paying, part-time jobs?”

There is another narrative of the Inland Empire – it could be considered the counter narrative of our region. Present at Assembly member Brown’s Summit was Aaron Hake, who serves as Planning Commissioner for Riverside County’s District 2. Just last week he proposed new policy amendments to the county’s General Plan to better mitigate the impact of goods movement on the economy and quality of life, not just in Riverside County but throughout the region.

“Our communities deserve to be more than a loading dock,” he said after the policies he drafted were accepted 4-0 by his colleagues on the commission. “These policies seek a regional, public-private collaborative approach to ensure we plan for the future, that we aim high and seize our destiny before it seizes us.” “We need projects,” he continued, “that contribute to a higher vision of what we want our communities to become.” So if the ever present train whistle that became the soundtrack for my day is a figurative warning, alerting us that danger is approaching, then we should follow the lead of policymakers like Mr. Hake and write a futuristic narrative where the air is clean and the jobs pay a living wage…and our landscape doesn’t resemble a giant field of trucks, trains and massive warehouses.