We’ve Been Warned About the Fire Next Time

This year’s fire season is living up to its ominous warnings. The National Weather Service warned of strong winds and stated, “If there is a fire ignition, it would exhibit with very rapid-fire growth and extreme fire behavior.”  Last week the agency’s forecasters further warned of hurricane-strength winds and low humidity—the worst kind for wildfires.

And, according to a UCLA climatologist there’s no more typical California wildfire season, warning it may be year-round, “You’re getting [a] longer period of the year when you get these fires. We’re literally burning the candle at both ends.” Where a typical wildfire season in California used to begin in mid-summer and run through early autumn. Another climatologist warned—not this year, not anymore.

The California Department of Forestry and Fire Protection (CAL FIRE) warned in its 2019 Fire Season Outlook that not only did California experience the deadliest and most destructive wildfires in its history in 2017 and 2018, the length of fire season is now estimated to have “increased by 75 days across the Sierras and seems to correspond with an increase in the extent of forest fires across the state.”

Pacific Gas and Electric (PG&E) has implemented a new practice called the Public Safety Power Shutoff or PSPS to warn customers it may be necessary to turn off electricity when gusty winds and dry conditions are imminent. Edison has a similar policy. Yet, despite these efforts it is feared power equipment may be to blame for some of this week’s wildfires. 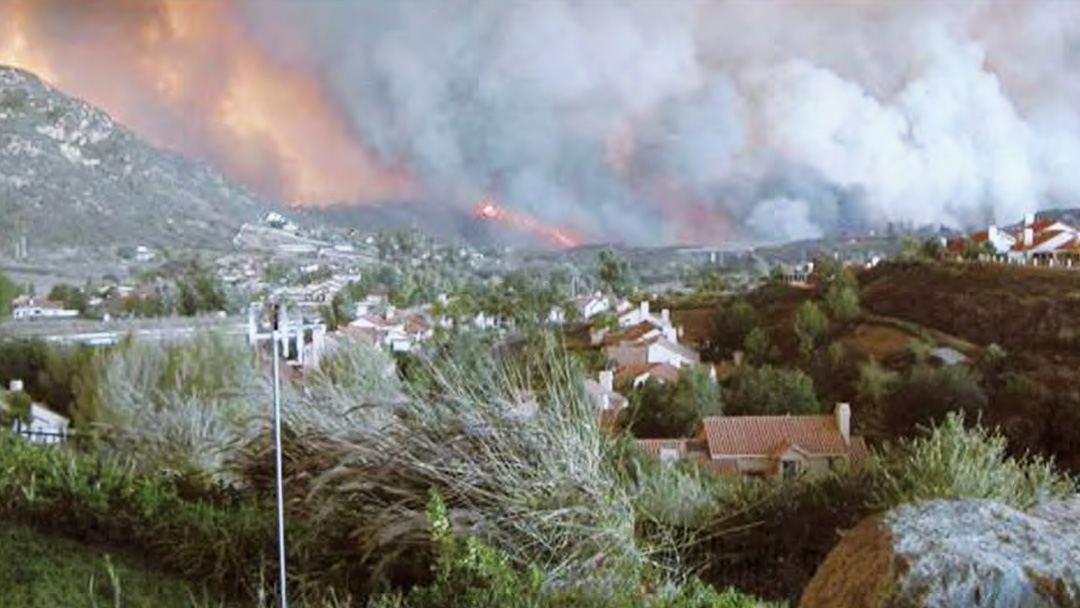 At the same time, health officials up and down the state issued warnings to residents about the dangers of smoke and ash from wildfires. “Everyone worries about the flames, but smoke can impact you even if you’re miles away from the fire,” warned Riverside County’s Public Health Officer, Dr. Cameron Kaiser.

The CDC warned, “People who have heart or lung diseases, like heart disease, lung disease, or asthma, are at higher risk from wildfire smoke. Older adults are more likely to be affected by smoke. This may be due to their increased risk of heart and lung diseases.”

In September, 2011 the Union of Concerned Scientists warned, “Higher spring and summer temperatures and earlier spring snowmelt typically cause soils to be drier for longer, increasing the likelihood of drought and a longer wildfire season, particularly in the western United States.”

The scientists further warned such hot, dry conditions also increase the likelihood that wildfires will be more intense and long-burning once they start.

So, we’ve been warned and the warnings have morphed to reality before our very eyes. The costs of wildfires across the state in human life, human health, property damage and loss are devastating; and the costs in state and federal dollars is extensive. All of this is certain to increase unless of course, something changes.

Although we were warned and are now experiencing the realization of such warnings, we understand the risks; yet, seem impotent, unable to address the causes—something that should be beyond debate. We should be able to find ways to reduce activities that are perpetuating wildfire risks. We continue to send too many representatives to Washington, D.C. who support a party and ideology that stands in opposition to this reality; representatives who also advocate for and vote in favor of policies that make us all even more vulnerable to the impacts of the world’s changing climate.

There is so much at stake—citizen’s physical health, their emotional health (many wildfire survivors suffer from Post-Traumatic Stress Syndrome or PTSD), their very lives, and the potential loss and damage to hundreds of thousands of homes impacting entire communities.

All of this of course is poised to worsen due to a rapidly changing climate. So, I state once again, “We’ve been warned.” And, I ask, “What now?”

As the state suffers through this year’s wildfires it also faces a growing housing crisis. As it seeks solution to the housing concern, we must be mindful of the dangers inherent in continuing to build communities in wildland-urban interface areas where homeowners are extremely vulnerable to wildfires.

A 2018 UCR research report noted, “When houses are built close to forests or other types of natural vegetation, they pose two problems related to wildfires. First, there will be more wildfires due to human ignitions. Second, wildfires that occur will pose a greater risk to lives and homes, they will be hard to fight, and letting natural fires burn becomes impossible.”  At 11.2 million, California has more houses built in the wildland-urban interface than any other state in the nation—four million more than New York, the state with the second highest count. Despite awareness of the potential dangers building houses in these areas would potentially cause those who purchased homes there, between 1990 and 2010 nearly 34 percent of all new homes in California were built in wildland-urban interface areas—many, right here in the inland region.

On Saturday afternoon, November 2, 2019 this year’s current conflagration continued to flame with no less than 13 fires raging across the state, several only marginally contained.

Some question whether it’s time for the citizens of California to demand something different and elect more representatives willing to place the well-being of this state and its citizens above all else. Unless something changes, we are doomed to suffer continued loss by fire. Declaring a State of Emergency and tossing money at the problem after the fact is no solution as the cycle is destined and continues to repeat itself again and again.

In his seminal work The Fire Next Time, James Baldwin wrote, “We are capable of bearing a great burden, once we discover that the burden is reality and arrive where reality is. Anyway, the point here is that we are living in an age of revolution . . . America is the only Western nation with both the power, and, as I hope to suggest, the experience that may help to make these revolutions real and minimize the human damage.”

Although Baldwin’s focus was different, his message is applicable. It is time for Californians to call for a revolution of ideas to address and mitigate the risks of wildfires.