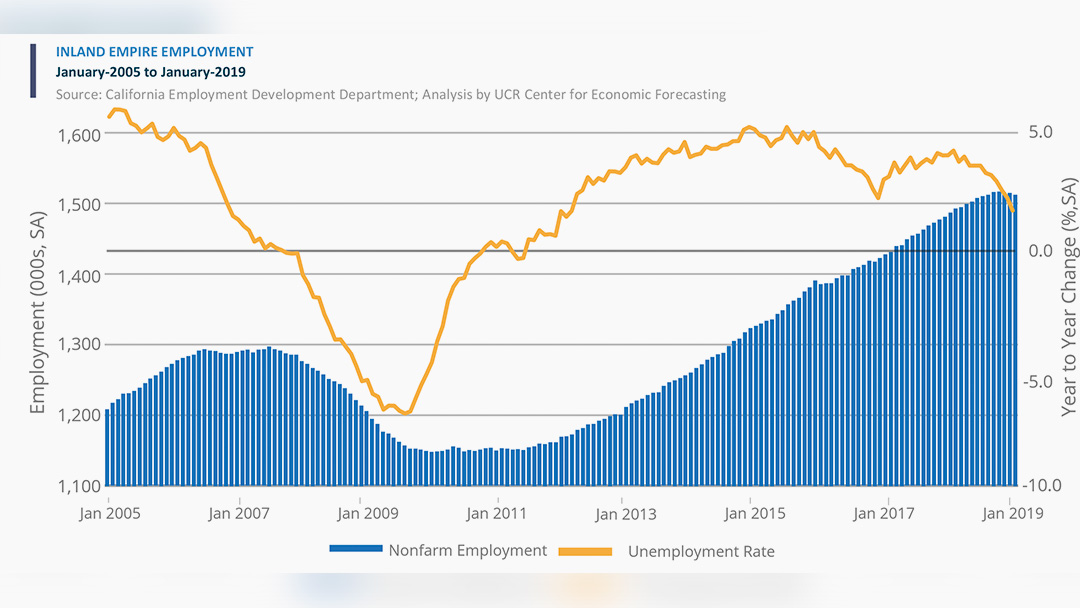 The UCR School of Business Center for Economic Forecasting and Development reported wages in the Inland Empire have continued to increase though at a slower pace than the rest of the state. The Inland Empire Regional Intelligence report considered the most recent data available which showed earnings in the inland region increased 2.8 percent from the first three quarters of 2017 to the first three quarters of 2018. Accordingly, wages in Riverside County increased 2.7 percent and wages in San Bernardino County increased slightly more at 2.8 percent, while wages in the state overall increased a total of 4.3 percent.  On the other hand, job growth in the Inland Empire has continued to out-perform the rest of Southern California. From January 2018 to January 2019, the labor force in the Inland Empire grew by 2.3 percent compared to statewide growth of a mere 1.5 percent. Los Angeles County grew by 0.7 percent, Orange County by 1.7 percent, and San Diego County by 2.2 percent.  “The healthier growth we’re seeing in the Inland Empire’s work force is being driven in part by the region’s greater home affordability relative to surrounding areas and this represents a significant competitive advantage into the future,” said Robert Kleinhenz, Executive Director of Research at the Center for Economic Forecasting.  “At the same time,” he added, “the tight regional labor market bodes well for continued wage gains to Inland Empire workers as businesses across Southern California compete to fill open positions.”  Beyond wages and employment, the Inland Empire Regional Intelligence Report also examines consumer and business spending, in addition to residential and commercial real estate. You can view the full report online at beaconecon.com/wp-content/uploads/2019/03/IE_RIR_March_2019.pdf.