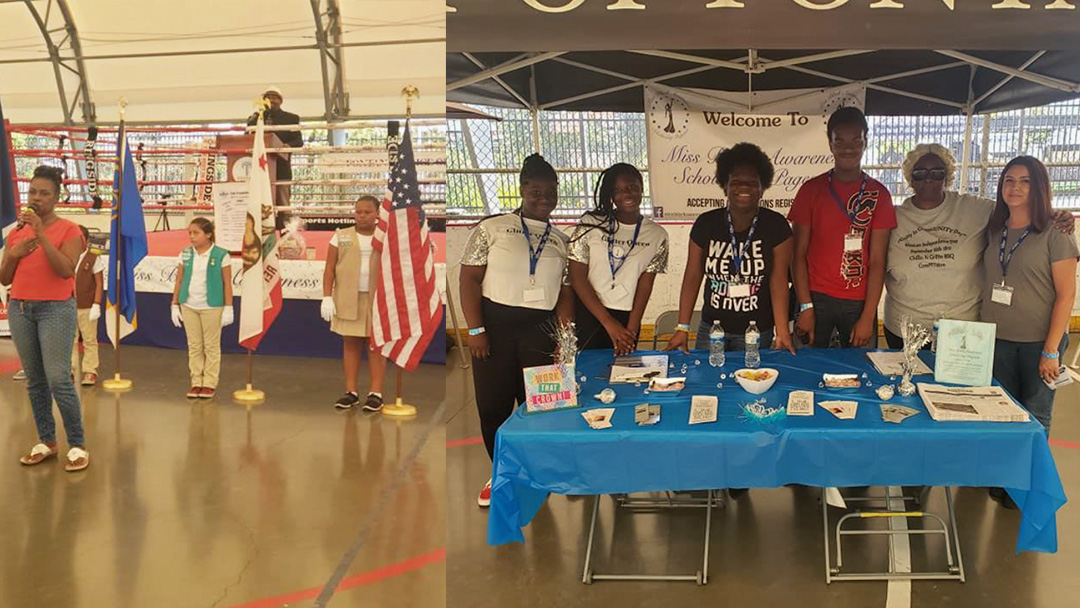 The community gathered at Jessie Turner Sports Pavilion in Fontana Park on Saturday, September 14, 2019 between 11:00 a.m. and 3:00 p.m. for the annual “Unity In CommUNITY Day” celebration.   As guests arrived, they had an opportunity to walk thru the Cruising Brothers’ People’s Choice Classic Car Show where they voted for their favorite car.  “Fiona the Movie Star Car” and the official p arade car was available on display for photo opportunities.  Nearby, CHP Officer Garcia gave children an opportunity to sit in a CHP vehicle, turn on the lights, siren, and experience being a CHP for a day.  In honor of 911 the Fire Department displayed a hook and ladder truck as a reminder of the first responders whose lives were lost and whose lives they saved.   More than 40 community volunteers help set up for the day’s celebration which included a massive, official boxing ring which served as a focal for the day’s events.  The emcee, celebrity sports radio personality Brian Arrington and Ontario Improv Comedian Mike Camo kept the crowd entertained throughout the day. Grills, attended by competitors in the BBQ competition, lined “Grillers Row” located near the venue’s entrance.   The presentation of the flags by the San Gorgonio Girl Scout Kai Aloha Troop opened the event followed by singing of the National Anthem by local performing artist Valerie Singleton-Evans.  The 2019 Superbowl LA Parmelettes Drumline under the direction of LaKeisha Mack from Lock High in Compton—the Alma Mater of Fontana Mayor Aquanetta Warren—made a special presentation in her honor. The mayor was surprised and overwhelmed with emotion and memories of her days at Lock High School. The days festivities included vendors, music by DJ KFon, as well as face painting, balloon characters and a craft station for the children. With an eye on Mexican Independences Day the celebration also featured several boxing demonstrations by students under the tutelage of Boxing Trainer Frank Ramirez of the Fontana Boxing Club Youth Program.    Also, in attendance at the event was Olympic title holder, World Boxing Champ and Hall of Famer Armando Muniz who spoke words of inspiration to young people in attendance to “never give up on their dream.” Munoz stayed to sign autograph photos for his admirers and fans.