November 20 was Transgender Awareness Day—a day set aside to honor and give dignity to those transgender people who have been murdered by hate and violence in the past year.

Last week, almost as if to mock the human rights of these individuals, President Trump marked the week by calling on the U.S. Supreme Court to fast-track his proposed ban on transgender individuals serving in the military–an initiative he introduced last year.

Currently, there is no federal law that explicitly prohibits discrimination against lesbian, gay, bisexual, and transgender (LGBT) people. Title VII of the 1964 Civil Rights Act specifically outlaws hiring or employment discrimination based on “race, color, religion, sex, or national origin,” but does not make any mention of sexual orientation.

The military policy announced by the president last year defied recent court rulings and would prevent anyone with a condition identified as gender dysphoria from serving. It would also overturn a decision made by former President Barack Obama that allowed such service.

Gender dysphoria is a form of distress experienced by transgender people usually because the sex and gender they were assigned at birth does not match the person’s gender identity.

Trump’s appeal to the Supreme Court on this issue is viewed by skeptics as an attempt to by-pass the appeals courts who have frequently ruled against his policies.

In the meantime, the president’s continued efforts to demonize members of the transgender community may only result in more animosity toward this vulnerable group.

In addition, of the 102 murders of transgender individuals between 2013 and 2017, no less than 86 percent were people of color. Experts believe these individuals are especially vulnerable because they sit at the nexus of sexism, transphobia and racism. 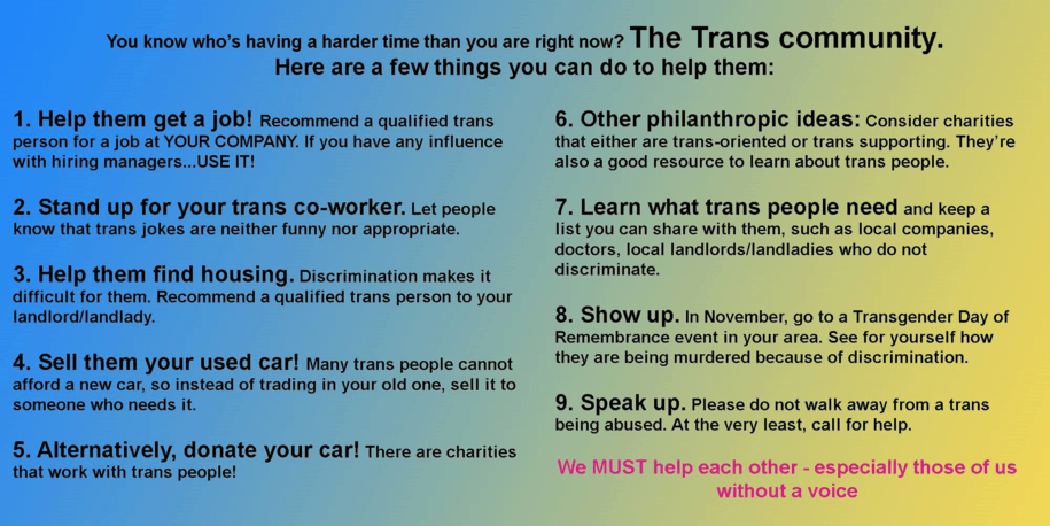 Whether the deaths of these individuals were officially classified as hate crimes matters less than the actual hate that resulted in their deaths. Murder is at the forefront of issues faced by these individuals, but it is certainly not their only challenge.

In addition to a high rate of respondents who reported they had considered suicide, at least two thirds of those who responded reported bouts with depression or an anxiety disorder. The report noted how the internal and external pressure on members of the transgender community can be overwhelming. Some experience feelings of isolation and a belief that many outside of their transgender community do not care about them.

As the president and his administration continue to single out various groups for demonization it is important that members of communities across the country stand in solidarity with those who are targeted be they transgender, Muslim, immigrants seeking a better life, women, Black athletes and/or others yet to be identified.

The list appears to grow longer with each passing thought that randomly drifts through the president’s dangerous mind about any group that does not fit the ideal of what he considers, “good stock.”