Through Thick And Thin: Clifford & Ronald 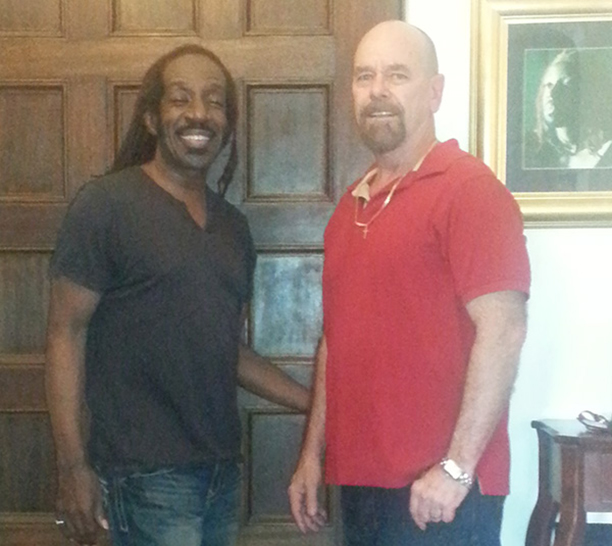 New series takes a look at what keeps people together.

Chance encounters are generally reserved for fairytales, Hollywood movies, and weekend programming on the Lifetime Network. But over two decades ago, in downtown Riverside on a brisk, late February winter’s night, a chance encounter between Clifford Breland and Ronald Nelson at The Menagerie nightclub became a tale of what stories of happily ever after are made of.

“I remember him just standing there in the doorway. He looked like he was auditioning to be a model or something,” recalls Nelson.

Breland wasn’t sure if he would go in. It was the late 80s and the hysteria over the AIDS epidemic was at an all time high and promiscuity in the gay community was the culprit according to mainstream media.

Living on his own for the first time, Breland a sophomore at the University of California, Riverside, was away from home and began to explore. What had always been there just beneath the surface for as long as he could remember, at 20-years of age, he still wasn’t comfortable with who he was, and had yet to tell family and friends.

He found himself in the doorway of Riverside’s longest running LGBT friendly bar, debating if he should step inside or step away.

“He eventually came in,” said Nelson who could feel the connection between them instantaneously.

The two danced all night and shared laughs, it was as if they knew each other their whole lives. They exchanged numbers and talked for long hours on the phone until one or both would go to sleep.

Breland said Nelson had to be monogamous. He grew up in the church, in a small southern town in Mississippi and didn’t believe in being promiscuous. He especially did not want to be promiscuous at the height of AIDS in America. Breland made Nelson get tested and retested.

“You had to. It was so frightening. One minute you’re partying and having a good time and then all of a sudden this epidemic hits. Then when you got it, you didn’t last three months. There was fear all over the place.”

The two fell hard for each other and in August moved in together.

It was a challenge for them at the time being a gay couple in Riverside.

“We didn’t hold hands or anything like that, not at that time,” said Nelson. “Not that we couldn’t, but you want to be respectful as well.”

This was before gays were fully accepted in mainstream society. This was before TV shows like Queer as Folk, Glee, and Modern Family entered American households. It wasn’t socially acceptable for two men to share a kiss along Riverside’s Mission Avenue.

Nelson said his mom especially took his “coming out” hard, disinheriting him from her will.

“It was tough, she didn’t speak to me for years,” said Nelson.

Breland’s family “always knew” he wasn’t like the “other boys.” While most of his peers and cousins gravitated toward football and basketball, his passion was dance.

In some ways Breland and Nelson were trailblazers. They both see themselves as role models in their personal life and as business owners. They founded Bre Dance Studio, shortly after moving in with each other in 1988.

“All the older generation knows is what they’ve been taught, you can’t really blame them.”

That does not mean Breland wouldn’t check someone who tried to play the ‘holier than thou game’ with him.

“We are all God’s children and we are all created equally, but others would try to convince you otherwise, you know who you are and you know who created you and everything he creates is perfect.”

The two would make their union official in the eyes of the law on March 11, 2014. Their families have embraced their union as well over the years and Nelson’s sister did their vows.

“He was jittery,” said Breland, having a good laugh at Nelson’s expense. “Even after all these years.”

“I don’t remember having jitters,” said Nelson giving his partner a look of ‘knock it off right now.’

Breland smiles, acknowledging this is not the best time to make fun of him in front of the reporter. Breland decides to clean up with a love tap.

“But that’s the thing where he is strong, I’m weak and vice versa. We’re kind of perfect like that.”

Nelson looks at him again but this time with nothing but adoration in his eyes. They have been through so much in their years together but they have always gone through it together.

“I’ve seen them effect change in the community,” said Anthony Jackson, 49, who has seen them support their young students through tough times as adolescents and get them full rides through college for dance.

“It’s so encouraging to see a couple not bounce around from relationship to relationship,” said Jackson who himself is gay.

Breland has helped him get over heartache and heartbreak on more than one occasion and has been their to support him through his career as a dance instructor. Staying with him in prayer and being like a big brother to him.

The studio has been an incubator for students who have gone on to The Joffrey School of Ballet, National School of Ballet in Canada, Alvin Ailey School of Dance, and San Francisco School of Ballet. Some of his students have also gone on to work with: Beyoncé, Ricky Martin, Mary J. Blige, Brian McKnight, Will Smith, Bette Midler, Aaliyah, Missy Elliott, Natalie Cole and perform on the BET Music Awards.

“There’s something profound about walking in your own truth,” said Breland.

Breland said, they are just like any other couple. They have a mortgage together, are trying to decide what age they will be able to retire and are in the final stages of becoming foster parents.

“Once people see you walking in your truth and see who you are and what you are about, the gay thing kind of just goes away.”