The Dog Days of Summer

“When you have a voice, you also have a moral obligation to use that voice for good.”
Leandra Medine

In July 2015, an article appeared in National Geographic titled, Why Do We Call Them the ‘Dog Days’ of Summer?

The report noted, “To the Greeks and Romans, the ‘dog days’ occurred around the day when Sirius appeared to rise just before the sun, in late July. They referred to these days as the hottest time of the year, a period that could bring fever, or even catastrophe.”

More and more lately I’m beginning to wonder whether America has a fever and/or possibly headed toward catastrophe.

Consider today’s reality in California, where wildfires have raged from one end of the state to the other while record-breaking heat has carved a path of death and destruction. Then consider the bizarre and shamelessly dispassionate Tweet offered by the president on August 6th that read, “California wildfires are being magnified & made so much worse by the bad environmental laws which aren’t allowing massive amounts of readily available water to be properly utilized. It is being diverted into the Pacific Ocean. Must also tree clear to stop fire from spreading!”

By the time the president thumbed this Tweet, California’s conflagrations were well into their second week, had resulted in at least nine deaths, destroyed 11,000 structures, 14,000 firefighters were battling blazes up and down the state–at two of them were already killed in the process (another firefighter died Monday) and Northern California was in the grips of the largest wildfire in the state’s recorded history.

In the meantime, although the president’s Tweets (he’s posted others) regarding California’s wildfires were nonsensical, his brazen attacks against the FBI to undermine the integrity of the Special Counsel’s investigation into Russian meddling in the 2016 election moved forward with the full compliance and complicity of Republican members of congress. 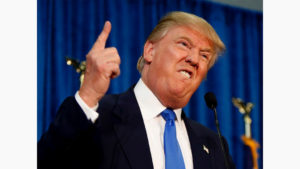 The role of congress has played in enabling the shameful antics of this president has stooped to unprecedent depths as have the actions of members of his cabinet.

Included among the president and his supporters’ most obvious and egregious efforts to obstruct and kill the investigation has to be the “thousand cuts” to those who formerly led the FBI. The agency’s former Director, James Comey, told Congress under oath more than a year ago about what he alleged, was the reason Trump fired him—an action that triggered the appointment of the Special Counsel. During his testimony, Comey said he not only kept contemporaneous notes of his meeting and discussions with the president, he also listed those in the FBI hierarchy he told about those conversations shortly after they occurred.

On Monday, Bowdich issued the order to fire FBI agent Peter Strzok over the controversial and disparaging text message he authored about Trump. Now, most have concurred the messages were unprofessional, but what is frequently lost in the argument is that they did not violate FBI policy and he also exchanged similar messages with his girlfriend about Hillary Clinton and other politicians of both parties as well. In addition, the Inspector General’s investigation found zero evidence that Strzok’s personal opinions impacted his investigative decisions. There appears to be no limit to the president’s abuse of power.

In 2018, the nation is truly living through “Dogs Days of Summer” like no other. In the words of a song by my favorite folk group, Sweet Honey in the Rock, “B’lieve I’ll Run On, See What the End’s Gonna Be.”