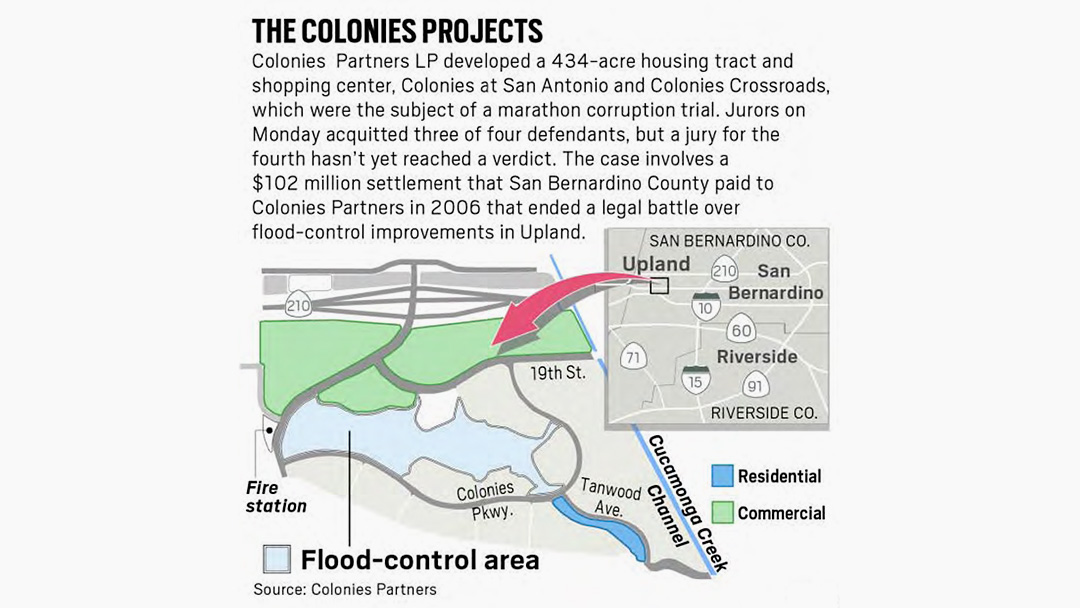 The Colonies scandal that has morphed into a continuing saga is once again in the news. Last week U.S. District Court Judge Jesus Bernal ruled county officials must hand over communication documents accrued during the long years it took to settle the Colonies case.   In August 2017 defendants charged in the Colonies case, which included former Assistant Assessor Jim Erwin, developer Jeff Burum, former Supervisor Paul Biane and Mark Kirk (the former chief of staff to retired County Supervisor Gary Ovitt) were found not guilty of all charges.   In the case that dragged on for eight years, state and local prosecutors alleged Burum conspired with the other defendants in a bribery scheme that resulted in the historic $102 million settlement in 2006 related to the county-built flood-control channels that emptied into the Colonies property. The settlement favored Burum’s Rancho Cucamonga Colonies Partners LLP at the expense of the county.  In the criminal case it was alleged Burum made $400,000 in political contributions to the other defendants as well as to former Board of Supervisors Chairman Bill Postmus. Postmus eventually made a deal with prosecutors and testified against the others. In the wake of their exonerations, the former defendants filed civil lawsuits against the county seeking a combined total of $102 million dollars in damages. Although the suits were initially filed against former California Attorneys General Jerry Brown and Kamala Harris, San Bernardino County District Attorney Mike Ramos, investigators in the District Attorney’s office who were involved in the case and other local officials—since the suits were initially filed, claims against Brown and Harris were dropped.  The documents being requested by the defendants include all communications related to the various conflicts surrounding the Colonies development that date back to its origin in 1999 including all exchanges between the prosecutor’s office and state or federal law enforcement and the state attorney general’s office.