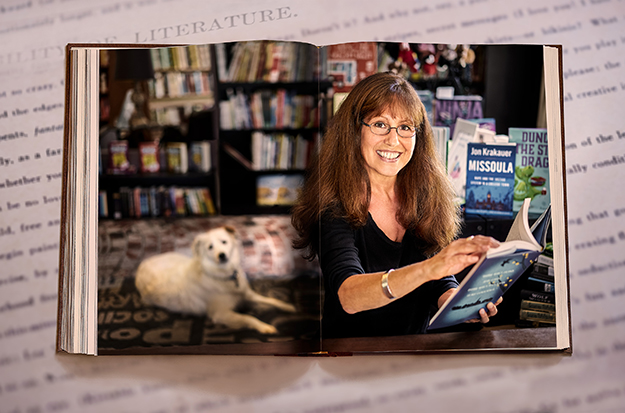 When Linda Nurick opened Cellar Door Books in 2012, she created a rare and sacred space for book lovers not only in Riverside but throughout the Inland Region.

In 2012 Riverside had its share of large chain bookstores and electronic readers, tablets and smart phones had already changed the way literature, news and magazines were consumed. So, when Nurick decided to open her independent bookstore she knew it was a gamble; however, books mattered to Nurick and she believed they mattered to others just as much. There is something about the smell and feel of books that true bibliophiles cannot resist. It is a place where patrons take time to peruse the shelves; to discuss the latest work by a favorite author; or to be the first to crack the spine of an intriguing tale.

Although Nurick was raised in a family of entrepreneurs she was initially hesitant about taking the risk—and then, she was given a glimpse of her family’s history. Nurick read a non-fiction book written by one of her cousins. It told the story of their Russian grandparents, immigrants during the Russian Revolution. Part of the story focused on Nurick’s grandmother and how she persevered through those difficult years despite the loss of one of her two children. The narrative was historically tragic and yet movingly triumphant. It was her grandmother’s story of overcoming that most inspired Nurick—it moved her from contemplation to action and Cellar Door Books was born.

Book-clubs are hosted at the store for a variety of ages ranging from small children to adults. Nurick’s customer base includes everyone from Turkish immigrants to the parents of little boys who hate to read. She loves to tell the story of a customer who came in one day with his young son. “My son hates to read,” the father told her. “The little boy looked up at me,” she explained, “And when I asked what kind of things he liked, he replied, I don’t like to read books.” Nurick said she smiled and reached for the children’s book Dragon Breath by Ursula Vernon, a book she knew was perfect for the child.

“As we were reading,” she said. “I noticed his eyes sort of open up and I thought to myself, ‘Gotcha!’ The boy’s father whispered, thank you.”

Clients travel from as far as away as Indio and Pasadena for the warm experience of the independently owned, Cellar Door Books.