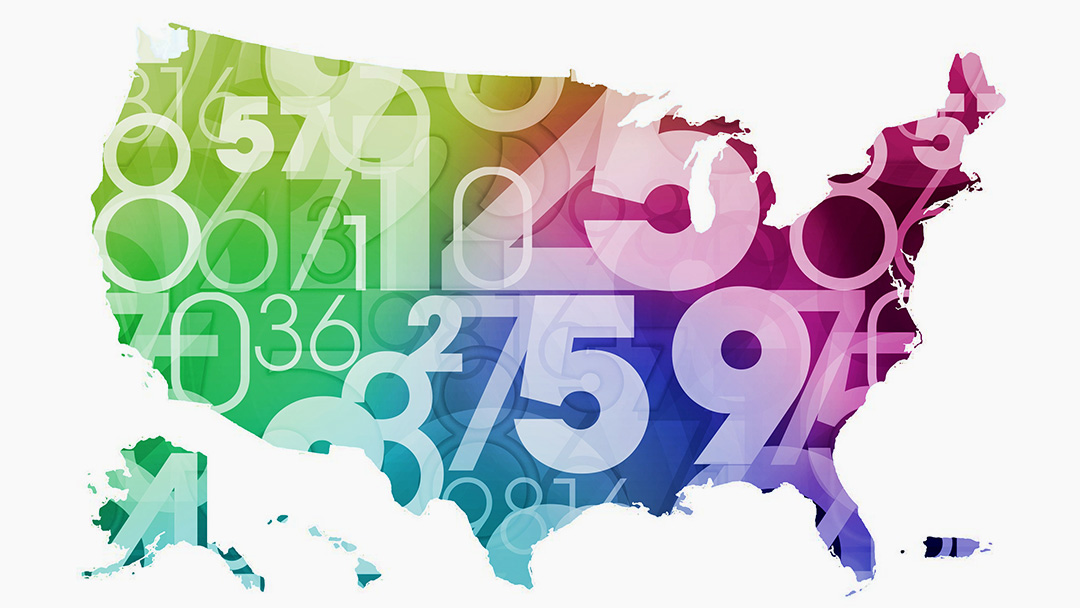 On Thursday, March 12, 2020, the U.S. Census Bureau began mailing invitations to America’s estimated 140 million households encouraging everyone to participate in the 2020 Census.

The initial mailings will continue through March 20 and for the first time, nearly everyone will be invited to respond to the census online, by phone or by mail.

“Invitations are arriving in mailboxes across the country, and everyone will receive an invitation to respond through the mail or from a census worker soon,” said Census Bureau Director Steven Dillingham. “We are encouraging everyone to respond once they receive their 2020 Census invitation.” The Census asks residents a few simple questions about themselves and everyone living in their household on April 1, 2020.

For individuals completing the Census online, it is important to note it must be completed in one sitting as there is no way to save your work in order to come back later and complete it. If you leave the questionnaire and return later, you will have to start over.

The good news is the Census questionnaire only takes about ten minutes to complete and responses can be worth millions of federal dollars and other resources to your community. Respondents can feel confident the 2020 Census is safe, secure, and confidential. Both their information and privacy will be protected.

“Your response helps to direct billions of dollars in federal funds to local communities for schools, roads, and other public services. Results from the 2020 Census will be used to determine the number of seats each state has in Congress and your political representation at all levels of government.”
– United States Census Bureau

Jeri Green is a 2020 Census Senior Advisor with the National Urban League, and one of the leading civil rights organizations working to assure African American participation in the 2020 Census, recently shared the results of a study by the Census Bureau of barriers in minority communities—Black, Brown, Asian, Native American, etc.—that were roadblocks to their participation in the process.

The study showed there is fear among members of these communities that the Census Bureau might share their information with law enforcement officials, parole officers, immigration officers, etc.

Green was adamant in her assessment that is not the case. “Your answers are kept anonymous,” she assured. “They’re only used to produce statistics.” According to Green, the Census Bureau is bound by law—under Title 13 of the U.S. Code—to keep Census responses strictly confidential.

According to officials, when responding to the Census you should be counted where you are living and sleeping most of the time as of April 1, 2020. Also, if you respond for your household, you should count everyone who lives and sleeps there most of the time as of April 1, 2020. This must include young children, foster children, roommates, and any family members or friends who are living with you—even if they are only there temporarily.

In the meantime, there continues to be a lot of misinformation about the Census. For the first time in Census history to help prevent the spread of fake, false and inaccurate information that can negatively influence participation in the Census the Bureau has established the first ever Trust and Safety Team focused on protecting the count.

“The rise of digital and social media use has exponentially increased the speed of how accurate and inaccurate information can spread,” said Stephen Buckner, Assistant Director for Communications at the U.S. Census Bureau. “We know that many people may not know what the census is because it happens only every 10 years, making it a likely target for misinformation and disinformation campaigns, which is why we’ve been actively preparing to defend against them.”

The Trust & Safety team is working with social media platforms, coordinating with YouTube and Twitter, collaborating with other government agencies, working with civil society organizations such as the Leadership Conference on Civil Rights and NALEO (National Association of Latino Elected Officials) Educational Fund, as well as the Better Business Bureau, and AARP, to protect consumers against possible scams and fraud during the count. Citizens are encouraged to call the Census Bureau Customer Service Hotline at 1-800-923-8282 to report suspicious activity.

Residents who do not receive an invitation to respond from the Census Bureau, may initiate their census participation by taking the 2020 Census online at https://my2020census.gov/, or by contacting the Bureau at (844) 330-2020. For those needing language support visit https://2020census.gov/en/contact-us.html to access a list of Bureau numbers to census workers providing help in other languages. 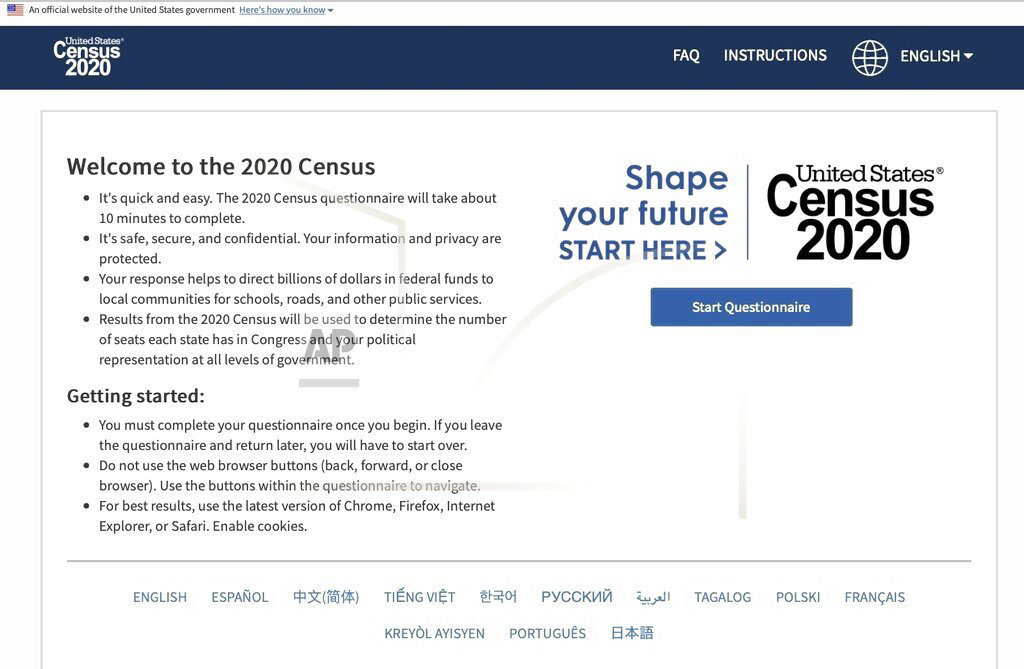 Every ten years the Constitution mandates a non-partisan government agency (U.S. Census Bureau) counts the population in the United States and five U.S. territories—Puerto Rico, American Samoa, the Commonwealth of the Northern Mariana Islands, Guam, and the U.S. Virgin Islands. The count must include everyone regardless of their citizenship status.

According to the Census Bureau along with the invitations, people can expect to find an overview of the Census, a description of language assistance in English plus 12 non-English languages and a Census ID number linked to their address. About 13 million households across the nation will receive bilingual English/Spanish invitations and questionnaires.

People filling out the form via the internet are encouraged to use the ID, but it is also important to note those who answer the questions online before getting their IDs will still be counted. According to Bureau officials however, “The best user experience is provided with a Census ID.”

“Responding to the 2020 Census is easy, safe and important, and it’s key to shaping the future of your community,” Dillingham said. “The 2020 Census will determine the number of seats each state has in the U.S. House of Representatives, and influences how hundreds of billions of dollars in public funds are allocated for critical public services like emergency response, schools, hospitals, roads and bridges over the next 10 years.”  Participation in the 2020 Census is critical as it will provide the data that lawmakers, business owners, teachers, and others need to make such decisions.

A sample of the 2020 Census questionnaire is available on 2020census.gov, along with more information about when most people will receive their invitations in the mail.

The Census Bureau has also created an interactive response rates map at 2020 census.gov/response-rates  so American communities can keep track of how they’re doing. Beginning on March 20, the map will be updated daily to reflect current response rates from communities around the country. For comparison, the map also displays the final response rate from the 2010 Census.

Following are some important dates to help guide you through the 2020 Census process. Please remember households can respond online, by phone or by mail.

• March 16-24: Reminder letters will be delivered.

• March 26-April 3: Reminder postcards will be delivered to households that have not responded.

• April 8-16: Reminder letters and paper questionnaires will be delivered to remaining households that have not responded.

• April 20-27: Final reminder postcards will be delivered to households that have not yet responded.

With mounting concerns over the impact of the coronavirus (COVID-19) on the day to day lives of Americans it is important to note Census enumerators will not begin their full-scale door-to-door efforts until sometime in May. At that time Census workers will being visiting homes that have not responded to the survey and seek their answers in person.

In the meantime, Census officials will continue monitoring the spread of the disease nationally as well as its potential impact on the door-to-door phase of the census process.

If the spread of the virus continues to deteriorate and mitigation efforts fail to prevent disruptions in the door-to-door phase of the Census process, the U.S. Census Bureau is considering alternatives designed to keep the Census count moving forward. One approach to the dilemma may include Census workers dropping questionnaires off at the homes of non-respondents instead. Of course, it would then be left to the people in such homes to complete the surveys and return them on their own.

U.S. Commerce Secretary Wilbur Ross—who is responsible for overseeing the 2020 Census—recently advised Congress of his organization’s goal to encourage people to respond to the Census questionnaire online [or by phone or mail] in order to minimize the need for physical contact that could help spread the coronavirus.

“We will just have to play it by ear,” Ross told the Associated Press. “We are ready to make responses and we will deal with the situation as it evolves.”

The coronavirus has added another level of complication/potential roadblock for minority activists and organizations keenly focused on avoiding another census undercount among minorities that has historically deprived their communities of much needed resources and representation.

Minority communities are working diligently to overcome the level of historical government mistrust related to the Census that many believe was further exploited by the Trump administration with its quest to include a citizenship question as part of the 2020 Census process.

Although inclusion of the citizenship question was ultimately defeated when the U.S. Supreme Court ruled against it last July, a large swath of minority residents still express concern about responding to the questionnaire due to privacy issues. This is particularly true for those who are immigrants and/or live in a mixed household.