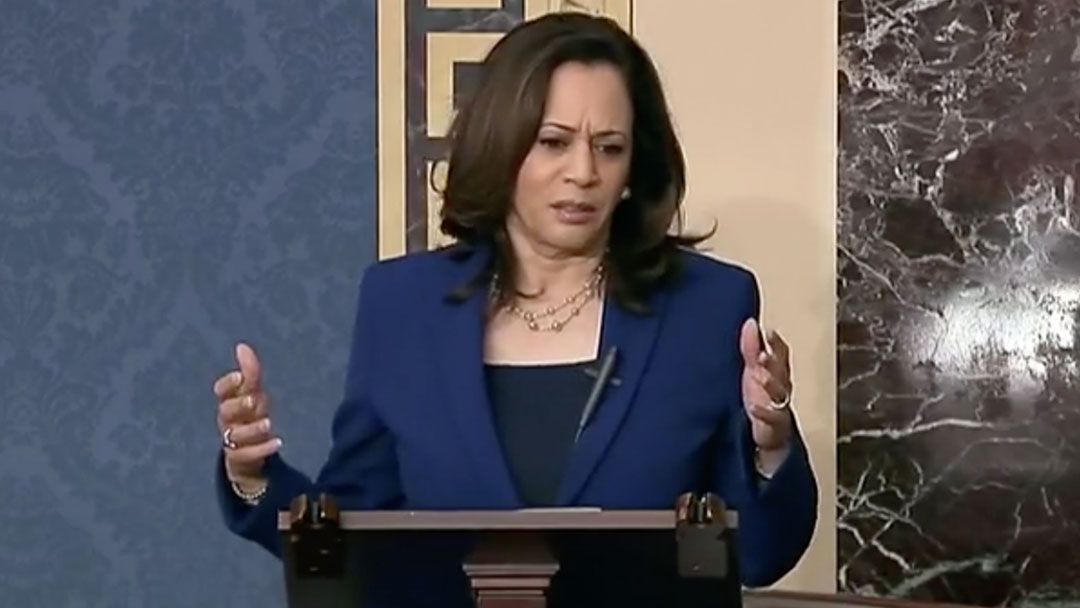 “Let us all be clear about what is happening in the politics of this moment. The Republican bill has been thrown out to give lip service to an issue with nothing substantial in it that would actually save or would have saved any of those lives.”

Harris, who strongly supported the Justice in Policing Act, civil rights and police reform legislation initiated in the House of Representatives which ultimately passed the House with bipartisan support on Thursday, June 25.

She began her statement to Senate peers by first recalling historical movements for change, before declaring, “In this movement there is still work that can be done, that should be done,” referring to Black people’s quest for equal justice under the law.

Noting how people in America today, people from all 50 states and every walk of life, are demanding the problems of police brutality be taken seriously she highlighted, “We should see where before there may have been reluctance to go against the strength of the status quo which is always reluctant if not hostile to change, people of every race, every gender, every age, [and] from every state are not only giving us permission, but are demanding that their leaders finally make good on the American promise of equal  justice under the law.”

She continued, “So, we can’t answer the people’s demands for accountability with watered-down politics and watered- down policy and obstructionists’ tactics to distract us from what we clearly know is necessary to meet the call and the cries of this moment,” she admonished in reference to the Republican’s legislative proposal.

“We cannot answer their demands with this Republican attempt to obstruct real progress and real justice in our country.”

“For all of the pundits out there that want to entertain a conversation about whether Democrats actually want police reform, Are you kidding me?” she asked.

“We are responding to the cries in the street. We are taking them seriously and we have proposed a prescription that actually responds not just to their demands on behalf of the bodies that have just recently been lost,  but the generations of Black bodies that have been buried because of this issue.”

Speaking with even greater conviction she lambasted her Republican colleagues, “So, don’t anyone dare suggest we are standing in the way of progress. “Let us all be clear about what is happening in the politics of this moment, the Republican bill has been thrown out to give lip service to an issue with nothing substantial in it that would actually save or would have saved any of those lives. So let’s not be distracted from the task at hand.”

Senators Cory Booker and Kamala Harris’ Statement on the Senate floor Tuesday, June 23, 2020 regarding why she will vote against the Senate Republican authored Justice Act on Wednesday, June 24, 2020.

She then shared her intent to vote against the Republican Justice Act on Wednesday.

She shared how police officers she interacts with have told her how difficult their jobs become when their colleagues break the rules. Noting, “It affects the culture of their working environment. It affects them where they work every day. It affects the Integrity of their work. “What they know is that bad cops are bad for good cops.”

Continuing she advised, “We all know it is in the best interest of community safety and harmony that the people trust their government and it is a reciprocal relationship.”

According to Harris, the Democratic party responded to the nation’s rising frustration and demonstrations related to police abuse with its House bill within a week of demonstrators taking to the street. The Republican party on the other hand modeled its proposal after the Democrats initiative addressing similar issues with tepid language and calls for more studies, no calls for accountability or consequence and while the nation has called for re-appropriating police funds to community based programs,  Republicans want to enhance funding to police.

Calling the Republican bill a tactic to obstruct the progress of the Justice and Policing Act and accusing them of playing a political game, she pointed to Senate Leader Mitch McConnell’s  recent inference that he has no intention of passing bipartisan legislation on this issue.

When Texas Senator, Republican John Cornyn, challenged Harris about voting against the Republican bill because they included the lynching legislation blocked in the Senate a couple of weeks ago. She quickly challenged whether he was referring to the bill blocked by his fellow Republican Senator Rand Paul? And, proceeded to insist  how she would not be forced into choosing one important issue over all the others, admonishing it would be like asking a mother to choose to save one child at the expense of all the others.

Harris criticized the Republicans calling their proposal carefully crafted to deflect from the issue by offering to study the problem without doing anything to solve it. “[It] does not even provide a baseline for a discussion.

She highlighted how the Republican measure does not hold law enforcement accountable, does not demand transparency regarding police misconduct,  does not call for data collection, no does it call for a  ban on harmful police policies or practices such as racial or religious profiling, nor does it ban the use of choke- or carotid holds. At the same time however, it does offer additional funding to police agencies against the will of many in the nation calling for police funding to be reduced and reallocated.

Senator Cornyn challenged Harris about wanting to discuss the issue in the Senate Judiciary Committee behind closed doors rather than on the Senate floor for all of America to see.

Undaunted, the Harris  smiled and responded with condescending grace, “Indeed, that is the beauty of the Judiciary Committee. Our meetings are public meetings.”

Her quick and cutting response appeared to catch Cornyn off-guard and speechless, possibly choking on his own disingenuous challenge. Caught in the act of spouting misleading disinformation purportedly for the consumption of Republican constituents, he had no comeback.

Harris concluded her comments and criticism of the Republican Senate bill declaring to Republican senators, “[In the] immortal words of my great-uncle Sherman, I will say, ‘that dog don’t hunt.’”

Stephanie Williams is managing editor of the Black VoiceNews and the IE Voice.