Something Happened on Appian Way 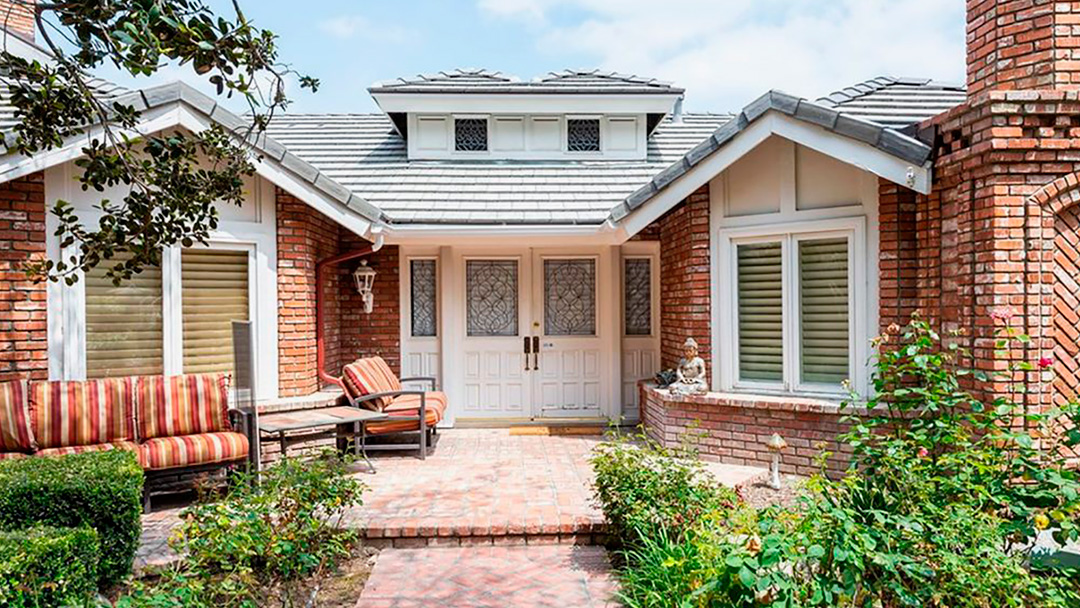 A Former Judge Complains, Cars are Ticketed, Racial Slurs are Made – Pt. 2

On Saturday, June 29, 2019 several people gathered for a celebration at 6601 Appian Way located in a very upscale section of Riverside.

During the event and for the second time in two weeks, neighbors summoned police officers to the location. On June 22, 2019 neighbors called the police claiming they were disturbed by the sound of loud music coming from the home and the number of cars parked along the roadway—neighbors made the same complaints to police this time.

What happened when officers arrived at the home on June 29 is now a matter of pointed disagreement between one of the party’s guests, Carlos Smith and homeowner, Debbie Shelton-Love versus the officers who responded to the call.

Part 1 of this story (September 12, 2019 edition of (The IE Voice/Black Voice News) described in detail the initial interaction between Smith, police officer E. Johansen, and retired judge William Bailey who lives on the street and was among the neighbors who complained

While Johansen was interacting with Smith, Bailey—who also happens to be the father of the City of Riverside’s Mayor, Rusty Bailey—inserted himself in the discussion. According to Smith, the senior Bailey allegedly assaulted him from behind as he approached himself and Johansen.

Smith also alleges while officers were on the scene Bailey used derogatory racial epithets to describe his guests and directed the officers to ticket the party goers, possibly even providing officers with the California Vehicle Code to use in writing the citations.

Forty-Six-year-old Smith is a single father of two children ages 8 and 14. He holds a bachelor’s degree in creative writing and a master’s degree in business administration. Smith is a Spoken Word artist and Executive Producer of High End Productions. He also manages a new start up production company in Las Vegas, NV, is the author of “The Elements: Love, Truth, Knowledge and Inspiration,” and is involved several other national and international artistic endeavors.

Whether what happened that day on Appian Way was a case of “Partying While Black,” or an abuse and misuse of perceived authority by a purportedly  belligerent, retired justice, further exacerbated by what may be an abuse of authority by police officers on the scene who possibly acquiesced to the retired judge’s commands and then worked to cover-up what actually happened; or, a disturbing coalescence of all of this—remains in dispute.

Getting to the bottom of this story should be easy. After all, the officers on the scene wore body cameras and/or voice recorders however as might be expected, a public records request by this publication was quickly denied by the Riverside Police Department. The public records request called for release of, “All officer documents, witness statements, police department emails, investigation results, body camera recordings and all 911 call recordings related to the police response to an incident that occurred on June 29, 2019 at 6201 Appian Way, Riverside sometime around 5 to 5:30 p.m.”

The response did however provide a high-level overview of what occurred as documented by officers and ended with the statement, “During the incident officers also investigated a possible battery.” 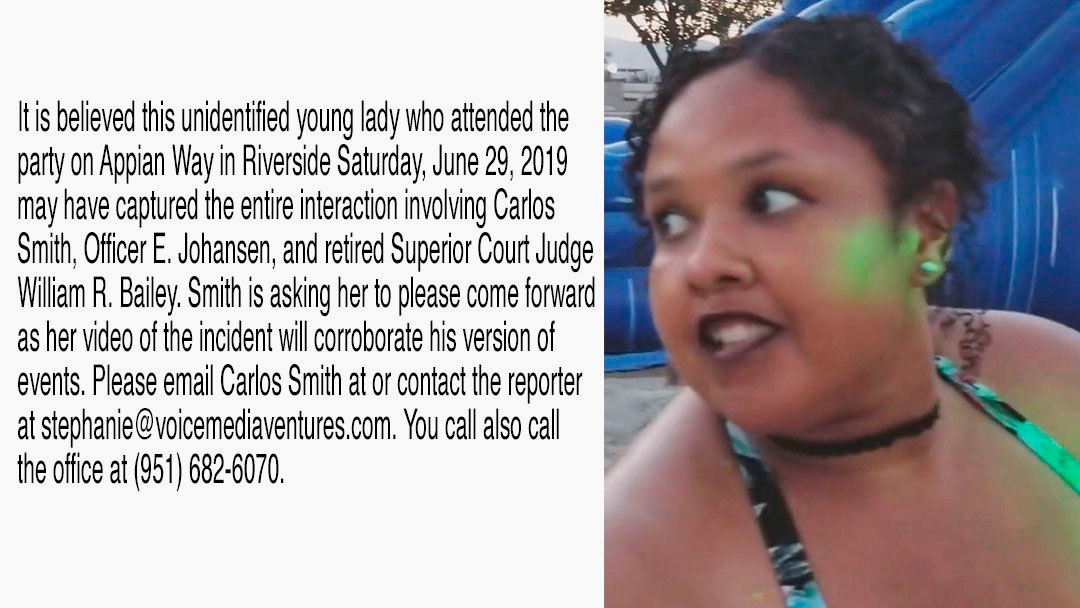 This was the battery complaint filed by Smith against retired judge Bailey.  An interview with Riverside PD Public Information Officer Ryan Railsback confirmed, “The criminal side of the case was closed-out due to unfounded allegations of assault by retired judge Bailey,” Railsback’s claimed, “[T]he body camera refuted the complaint.”

Although the Riverside PD closed their investigation into Smith’s complaint. Smith was never interviewed by investigators, never had an opportunity to review audio/video recordings of the event, and when he requested copies of documents related to the case, after first being stalled in his request, when he finally did receive the documents it did not include a witness statement from Bailey even though there were statements from the other neighbors interviews by officers that day and Bailey played a key role interacting with officers.

Railsback further confirmed although the battery complaint was closed, there was still an ongoing internal investigation into actions by officers on the scene that day based on concerns raised by Shelton-Love.

The department’s response to the public records request also noted that “One suspect, (homeowner Debbie Shelton-Love) was referred to the Riverside City Attorney’s Office for further review for violating city noise ordinances.”

Shelton-Love became a complainant in this case when she filed a complaint against Riverside Police Sergeant Collins who was called to the scene at the request of  Los Angeles County Sheriff Alicia Williams—a guest at the party—who grew concerned over the police officers’ actions that day.

In the complaint Shelton-Love said she was threatened with retaliation by Collins if Smith continued to insist on filing battery charges against the retired judge.

During an exclusive interview Shelton-Love, herself a retired sergeant with the Los Angeles County Sheriff Department, provided further information regarding her allegations against Collins and other officers on the scene that day.

“Everything that Carlos (Smith) said, I didn’t see any of that, I did not witness any of that,” she began. Shelton-Love explained she had left the residence for a short period that day to take her daughter to another event so was not home when the interaction between Smith and Bailey occurred.

“The only thing I witnessed,” she added, “was that Officer Hill (one of the other Riverside PD officers on the scene) told me when he was giving citations that they wouldn’t be out there giving citations if this [retired] judge Bailey hadn’t threatened to call the chief of police and hadn’t said he was the father of the mayor.’ That’s what Officer Hill told me directly.” Also, according to Shelton-Love Smith, the judge purportedly claimed he and his son run the City of Riverside.

Shelton-Love was later summoned to the police station and provided an opportunity to view some of the body cam footage in relation to her complaint against officer Collins and the scenario involving Smith and Bailey. She told the officers she did not witness the Bailey interaction.

According to Shelton-Love, “They refused to show all ten hours of video (a collection of footage from all officers on the scene) because they said they did not have time to do that. It seemed like they only wanted to show me anything that would disprove what Carlos was saying. They showed me parts of the video that would put Riverside [PD] in a good light.”

When discussing her own complaint Shelton-Love said, “I was threatened with further action by Sargent Collins if Carlos was to pursue any actions toward the judge…any prosecution…or anything like that.” On the day of the event she said, “I didn’t even get to discuss that with Carlos before the sergeant said, ‘Ok, call Carlos over. Let me see what he has to say.’”

She continued, “They called Carlos over and he was insistent that he wanted to move forward with an assault charge. Therefore, they went on with the report and I was served with a cease and desist order regarding any party I may have at my home. I felt it was unfair. My niece wants to get married here in May 2020 and I’m almost reluctant to let her have her wedding here.”

Recalling a small segment of body camera footage, the officers did allow her to review, Shelton-Love shared, “Because I had launched my own complaint [against Collins] they played it [that section of the video] for me.” During her interaction with Collins the video portion of the interaction where she alleges Collins threatened her with retaliation, “For some reason is muted and you can’t hear him talking . . . you can’t hear him say anything to me and I know what he said.”

“Tampering with Evidence is a criminal offense under California Penal Code Section 141 PC.”

Shelton-Love continued, “I saw the expressions on their [the officers in the room] faces like. ‘oh shoot, maybe something was manipulated.”

She believes about eight to ten officers on the scene that day. “They told me there was bout ten hours of video, but they only showed me about 40 minutes.

She went on to explain how during a wedding at her home a week earlier the police came out and although people were parked in the same places—no parking citations were issued. On June 29 however, “The judge was insistent on them issuing tickets to everyone. Officer Hill said the judge told them [the officers] to cite them. He gave them the penal code section to use to cite them.”

“The thing that riled me,” Shelton-Love continued, “was the simple fact that they seem to listen more to the [other] homeowners than to talk to me. There were statements like I was running a brothel here… that I was renting out rooms by the hour. I feel like they were influenced by what these people who have never spoken to me, who have never been to my home.”

The police report shows one neighbor—last name Amicone—told police, “[T]he residence was listed on Air B&B in 2018 as Love Manor and rented by rooms by the hour for sexual use until being shut down by the police department. Amicone felt the residence attracted a negative atmosphere and created ongoing community livability problems.” Shelton-Love adamantly disputes these allegations. Although the property appears on the internet as an AirBNB—the site was never activated and as such has never been rented.

Shelton-Love said she was not at home when the officer first arrived, and they never got permission from her to enter the property. “They hadn’t met me. They were going by what this judge and his friends were saying.”

According to Shelton-Love the officers also took gratuities. We are not supposed to do that.” One of the guests at the event had t-shirts on display and when the officers entered the property while Shelton-Love was dropping off her daughter when she returned the guest advised her, “I gave them a bunch of t-shirts and shooed them away.’

“We are not supposed to take anything as gratuities. This is not supposed to happen. I raised this during the interview,” Shelton-Love confirmed. “They say they are looking into it as part of the ongoing internal investigation.”

Shelton-Love expressed her frustration with Riverside PD’s closing the claim against Bailey without interviewing Smith and with no one having an opportunity to see all ten video hours of the incident. “I was called in because I filed a complaint against Sergeant Collins.”