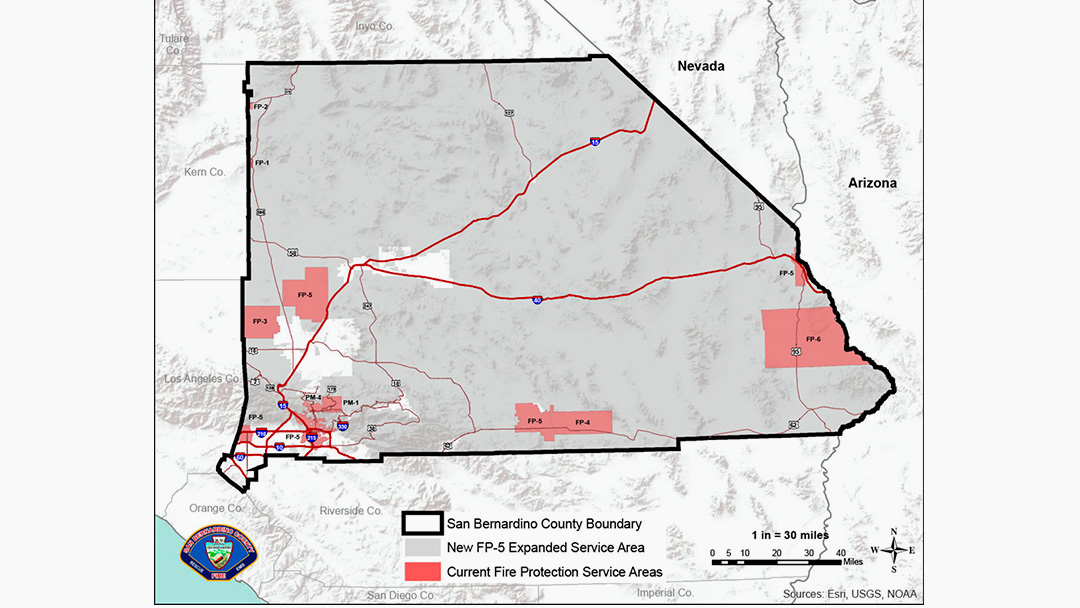 By a three to two vote, the Board of Supervisors approved moving forward with the process to expand boundaries of the FP-5 tax to raise revenue for fire services. Board Chairman and First District Supervisor Robert Lovingood joined Second District Supervisor Janice Rutherford and opposed the change.

Expanding the boundaries of FP-5 will provide additional revenue for the San Bernardino County Fire Protection District (SBCFPD) as the current assessment is set at $157.26 per year and can increase up to 3 percent each year.

The San Bernardino County Fire Protection District (SBCFPD) is currently operating with a $29 million budget shortfall. SBCFPD provides fire and emergency medical services (EMS) to residents throughout the entire County. It covers 19,278 square miles and serves more than 60 communities/cities. The only exceptions within the county are cities that have their own fire departments, cities that contract with other fire departments and areas receiving these services through special districts. The parcel tax only applies to areas serviced by County Fire. The proposed increase will be applicable to both improved and vacant parcels.

Under the proposal, FP-5 would be expanded to include all territories within the jurisdictions of SBCFPD not currently included in Service Zone FP-5. Today, FP-5 includes the areas of Helendale and the cities of San Bernardino, Needles, Twenty-nine Palms, Upland, and San Antonio Heights. FP-5 would be expanded to include all unincorporated areas of the county except those already receiving fire and EMS through other districts and except unincorporated areas within the sphere of influence of the City of Montclair. It will also include the cities of Grand Terrace, Upland, and the Town of Yucca Valley.

The extension of the boundaries of FP-5 will result in needed revenues to maintain current fire protection and emergency services within the Districts territories.

Residents will now have an opportunity to make their voices heard and protest the proposed increase. There is a 30-day protest period along with a scheduled public hearing set for October 16. The hearing will allow the public to express their opinions regarding the expansion of the FP-5 Service Zone. Protest forms will be available beginning September 14. More details and protest forms can be found online at http://www.sbcfire.org/ServiceZoneFP-5.aspx.

During the protest period, if at least 25 percent of property owners impacted by the increase submit protest letters to the county, it will trigger an election where the proposed increase would be scheduled for a vote. If, on the other hand, at least 50 percent of impacted property owners submit protest letters to the county, the expansion effort will be terminated.