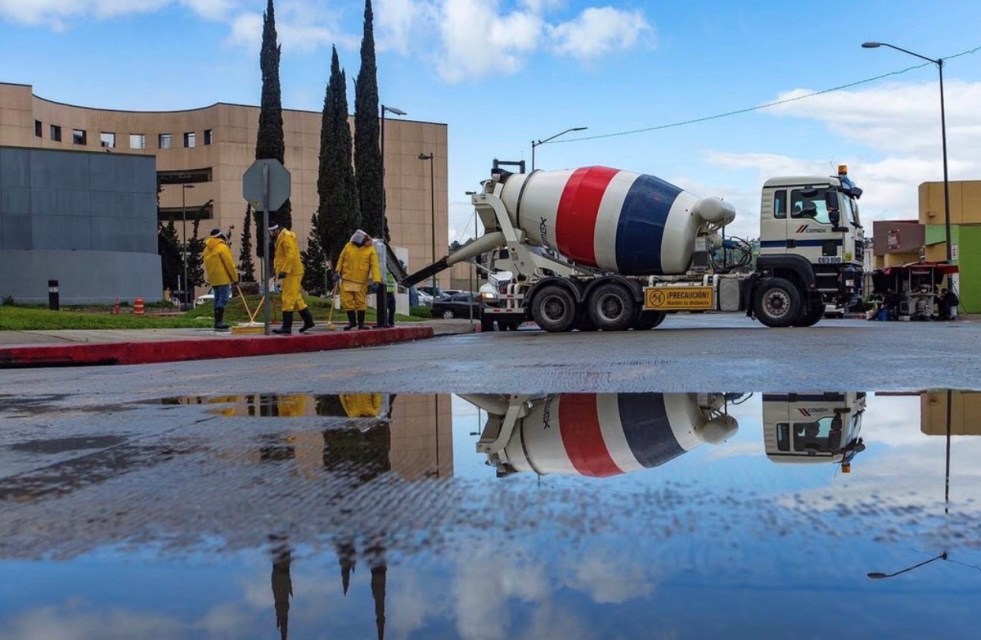 San Bernardino City Councilmembers believe leftover debris from a burned-out warehouse may cause environmental and health risks to residents.

In the course of the George Floyd protests, a fire —unrelated to the protests— destroyed a 600,000 square-foot Amazon warehouse in Redlands along the 2200 block of West Lugonia Avenue June 5, 2020.

Details on how the fire started are still under investigation.

City staff issued a permit in July 2020 allowing the cement developer, Cemex, to relocate the stockpile from Redlands and grind it on-site at the north end of San Bernardino.

Thousands of shipments of debris were discarded near residents just up the street from Palm Elementary School and Tom Minor Park.

In Oct. 2020, residents demanded Cemex stop grinding on-site, claiming debris was blowing into their homes and cars. Cemex has since abandoned the project.

Documentation by The Department of Labor Occupational Safety and Health Administration (OSHA) reveals that “sanding, grinding, or cutting concrete can release large amounts of dust containing high levels of crystalline silica. Prolonged or repeated exposure can lead to a disabling and often fatal lung disease called silicosis. Some studies also indicate a link between crystalline silica exposure and lung cancer.”

Now, residents and a majority of the council want the debris removed. The estimated amount of diesel trucks to remove the stockpile of broken concrete from San Bernardino is 2,800 truckloads.

Peggi Hazlett, a homeowner in the 5th Ward, Verdemont community just south of the Oxbow Project said her family had a front row seat to the ongoing project. She stressed the city must ensure it never happens again.

“We have lived with this health hazard for long enough,” she said. “Every opportunity was afforded the current developer to remedy the unpermitted construction debris pile from the burned down Amazon building. This never should have happened.”

“It’s really appalling that we have to make this type of decision that costs the city,” Kimberly Calvin, councilwoman representing the sixth ward said.

Mayor John Valdivia vetoes use of funds to remove stockpile

San Bernardino City Council passed a 4-3 vote to appropriate $2 million from the city’s undesignated General Fund reserve to support the cost of debris removal on April 7. It was vetoed by Mayor John Valdivia, the following day.

Theodore Sanchez, councilman representing the first ward, said the safest and fastest way to recover from this error is to bury the debris on-site. He said the $2 million could be allocated to further improve other parts of his ward.

“Crushing on the site is the best and safest option for us,” he said.

The councilman, however, did not provide an estimate of what it would cost to bury the debris on-site in comparison to the two-million-dollar plan using 2,800 truckloads it would take to get rid of it.

Sandra Ibarra, mayor pro-tem, refused to give the contractors another chance to right their wrongs, since they had continuously disregarded removing the pile for several months.

“The developer was not responsive to the city,” she said. “To give them another chance is something I am not willing to consider here.”

Ben Reynoso, councilman representing the fifth ward, where the pinpointed project occurred demanded this be considered a priority and safety hazard. He said residents sent him videos of debris sprayed on cars and homes.

“I’m almost gonna cry right now thinking about young children with asthma. Parents telling me new coughs are developing because they’re breathing it,” he said. “These are our people. You don’t live in this ward but this is your city, too.”

Fred Shorett, councilman representing ward 5, voted against the removal of the Oxbow Project’s cement pile. He disagreed that the project was doing any damage to the surrounding area.

“I’m not going to support this of course,” he said. “Maybe it was a blunder on our part. But you know, sometimes you cut your losses.”

Calvin said this was a “costly mistake” and criticized city staff for having ongoing conversations with the developer.

She claimed there have been emails outlining conversations between city staff and Cemex about how and when the debris would get to Palm Avenue and West Verdemont Drive.

“I heard it took 30 days to get there and no one had anything to question at all?” she asked rhetorically.  “Yet, here we are faced with this two to four million dollar price tag to satisfy the fifth ward residents, who either-way have to pay. We all have to pay.”

Michael Huntley, director of community and economic development in San Bernardino, revealed there was in fact a temporary use permit issued July 2020 for stockpiling material on that property.

Similar concerns in other wards

Juan Figueroa, councilman representing the third ward, shared there were other parts of the city left in the dark with the same issue.

He said there is an abandoned concrete stockpile dumped in an empty field near San Bernardino Valley College. Residents have been complaining of rodent infestations and other health issues.

“I just really wish there was the same amount of indignation for what’s happening in other areas of the city as well,” he said. “It’s inappropriate that we’re not even addressing some of those issues.”

Cheetara Piry is a community journalist who found passion in bringing a new voice to writing with the hope of engaging communities and spotlighting local journalism as a way to enact real change.