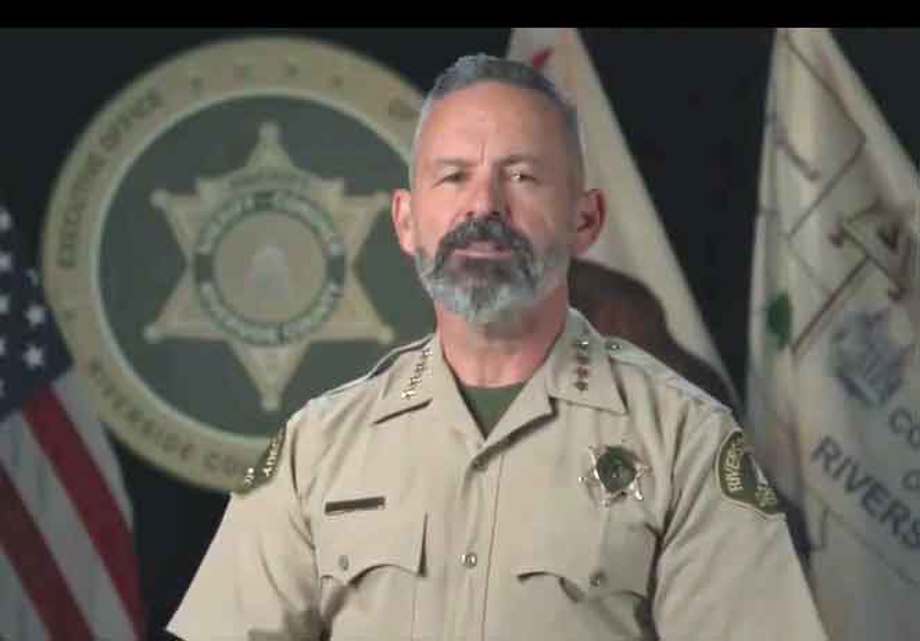 “Constitutional Sheriffs: The cops who think the government is our greatest threat.”

When the Riverside County Board of Supervisors was asked to weigh in on the issue of enforcement and the position taken by Bianco, spokesperson Brooke Federico said the county’s enforcement position has always been to educate first.

“When we receive a complaint about a business operating outside of the current state restrictions, the complaint is reviewed by a county enforcement team,” Federico said. “If the business is an eatery or other business that is permitted by the Department of Environmental Health (DEH) (e.g., tattoo salons and pools), then an inspector with the DEH will reach out to the business to go over the current orders and what modifications must be made.”

She further explained if the business in violation is not permitted by DEH then the County Counsel’s office will reach out and review the orders and modifications needed.

“This is an educational approach and we’ve found that most all businesses contacted come into voluntary compliance.”

Federico said, however, when a business has continued to operate outside of the current state orders, there have been times when the county has taken civil court action.

“Civil court actions include issuing cease and desist orders or seeking a temporary restraining order from the court,” she said. “These efforts are focused on events that could become super-spreader events.”

Although Bianco also supports educating residents to comply, few were surprised by his position not to enforce compliance, nor his over the top defiance as it aligned with previous stances taken during an earlier closure.

“The metrics used for closures are unbelievably faulty and not representative of true numbers and are disastrous for Riverside County,” Bianco said.

When the IE Voice and Black Voice News asked him to explain what he based his comments on about the data being “unbelievably faulty” and not representative of Riverside County, and whether he could provide data to the contrary and its source. Rather than responding to the inquiry, Sergeant Albert Martinez offered the following on Bianco’s behalf:

“We have been doing community update videos and they have been very well received by Riverside County residents.  Along with the videos, text is also being released.”

In this regard it is possible Martinez had not reviewed the negative twitter reactions posted by many.

He continued, “We have found that when we release videos and text updates, the public is better informed with a contextual account of the statement rather than snippets sometimes reported by the media and taken out of context.  This is a good example of its effectiveness. Our position has been consistent throughout this pandemic. The Sheriff has also been vocal that he and most all other law enforcement agencies would not actively enforce violations of the orders.”

Despite Martinez’s protestations, he was pressed further. After noting he had not answered the question about the data, he was once again prompted for a response to its source and what Bianco meant about the state’s data being “unbelievably faulty.” There was no further response.

Bianco is not alone in his defiance. Nearly a third of sheriff department’s around the state including San Bernardino County are refusing to enforce the state order.

Interestingly, according to a report by Politico, there is a movement composed of current and former members of law enforcement identified as “constitutional sheriffs” who believe sheriffs are the ultimate authority in their jurisdiction. Although there is no evidence Bianco is part of this movement, his actions regarding the stay-at-home order certainly fits the image. Some have even accused these sheriffs of having ties to White Supremacy.

Politico cited a couple of examples of constitutional sheriffs’ belief in absolute power:

“In 2013, 500 sheriffs nationally agreed not to enforce any gun laws created by the federal government. In Utah, almost all elected sheriffs signed an agreement to protect the Bill of Rights—and fight any federal officials who tried to limit them.”

They are dubbed “constitutional sheriffs” because the role of sheriffs is defined in state constitutions. For example, Article XI  Sec. 1 (b) of California’s constitution reads in part, “The Legislature shall provide for county powers, an elected county sheriff, an elected district attorney, an elected assessor, and an elected governing body in each county.”

This means the position of sheriff cannot be eliminated without amending the Constitution, and to Bianco’s point, there are few restrictions on their power.

Although sheriffs are elected by the people, readers may also be surprised to learn once they elect a sheriff, they, as voters, have little power over them. Consider what happened recently in Los Angeles County when voters tried to place term limits on their local sheriff. The sheriff sued and won. As reported by the Los Angeles Times, the court found a sheriff’s term limits cannot be altered by the voters.

Bianco was also asked to explain what he meant by “[The] medical field is so split on this virus it is about time to apply some common sense.” And again, he failed to provide specifics, stating only, “If you seek information from more than one news source, these opinions are easy to find, doctors and other medical professionals have differing opinions on benefits of masks, social distancing, and lockdowns.”

Yet, respected experts from around the world have stressed if people would comply with three basic recommendations—face masks, social distancing and hand washing—it would curtail the virus’ spread. Today, America’s failure to embrace and adhere to these simple preventative measures has resulted in it leading the world in COVID-19 infections and deaths.

The sheriff is adamantly against enforcement and the Board of Supervisors is taking a measured approach, but here are the facts:

On Thursday, Dec. 10 there were 3,729 new coronavirus cases and 12 additional deaths. And on Friday, Dec.11, hospitalizations in the county surpassed 800 and the ICU bed availability had dropped to 4.2%, far below the 15% baseline established by the state and the death toll reached 1,573.

Also, on Friday, the county’s case total reached 112,950 making Riverside only the 11th county in the nation to surpass 100,000 total cases according to John Hopkins University. In addition, Kaiser has placed mobile morgues at three of its hospitals in the inland region.

As evidenced by the data accrued since Bianco recorded his statement, conditions in the county have deteriorated.

“Why is he crying victim on behalf of California sheriffs,” a county resident inquired.

To many, this seemed disingenuous when considering Bianco’s track record of flexing his own authority.

In June, the Riverside County Board of Supervisors considered a review of the Sheriff’s Department policies related to the use of force and other issues. Bianco defied the review, calling it politically motivated and challenged the board’s authority to comment on policies he set for the department.

“It’s not your job to tell me what to do,” Bianco said. He ultimately stated he would form an advisory council, but he alone would decide who should participate.

The issue of having virtual autonomy as an elected sheriff aligns with the “constitutional sheriff” theory and may be playing a major role as sheriffs across the state flaunt their autonomy and authority in defiance of the governors. They appear more in alignment with the philosophies adhered to by many Republicans across the country. However, this is about more than politics, it is ultimately about power.

As the number of infections and deaths continue to rise and the economy teeters on the brink for many while it has already failed for millions of others, the parallel epidemic of equity, justice, and police reform in 2020 sustains as residents continue pushing for police reform despite the raging virus. Throughout the year, activists have pulled at threads of criminal justice issues and legislators have written bill after bill with some succeeding while others fail.

Yet, there is hope in the potential to put a check on those powers if inland area voters have courage to act where the Board of Supervisors may fail. In October, Gov. Newsom signed into law AB1185 which authorized—but did not mandate—a county to establish a sheriff oversight board to assist boards of supervisors with those duties as they relate to the sheriff. The law provides this can occur either by action of the board or through a vote of county residents.

“Without a mandate the measure appears powerless unless the local board of supervisors operates independent from the influence of local police unions who opposed this legislation; or a local measure is placed on the ballot and voters have an opportunity to decide for themselves,” as reported by Black Voice News Oct. 5, 2020.

At the time the bill passed, Bianco was obstinately opposed.

“Politics is killing our country and this is an example,” he said. He further complained the legislation implied the sheriffs were doing something wrong and needed to be fixed. Maybe that was the point of the legislation.

“The fundamental way residents of this great county determine the direction of their agencies, including the office of the sheriff, is at the ballot box. That is real oversight and accountability,” Bianco’s sentiments were firmly enforced by Bill Young, president of the Riverside Sheriffs Association.

Under existing law, sheriffs are empowered to preserve the peace, etc. but the law also requires the board of supervisors to oversee the official conduct of all county officers to ensure they perform their duties faithfully. Sheriffs certainly fit this definition though many like Bianco believe because they are elected, they are free to act autonomously.

At least 40 states across the country have elected sheriffs and many were courted by the Trump administration. For example, in Sept. 2018 during the peak of the ‘Build the Wall’ campaign and his ongoing battle with sanctuary cities, during a meeting between some of the nation’s sheriffs (44) and officials from ICE and U.S. Customs and Border Protection, the New York Times reported Trump appeared before them and delivered a diatribe against media outlets critical of his administration—the sheriffs applauded and cheered. They also presented Trump with a plaque that read, “There’s a new sheriff in town.”

Although Bianco was not elected sheriff until Nov. 2018, since taking office, there are questions about whether he has purportedly joined the pantheon of Trump supporters? This may be rooted in his appearances on Fox News.

However, it may be more closely tethered to his “Politics is killing our country,” and “It’s not your job to tell me what to do” mentality.

Citizens have four ways to reign in so-called “constitutional sheriffs” like Chad Bianco. Facilitate a recall; vote them out at the end of their four-year term (Bianco in 2022); approve a ballot measure establishing a sheriff oversight board; or revise the state constitution.