Riverside Woman Traces lineage to Sierra Leone, Now She Seeks to Build a Life There 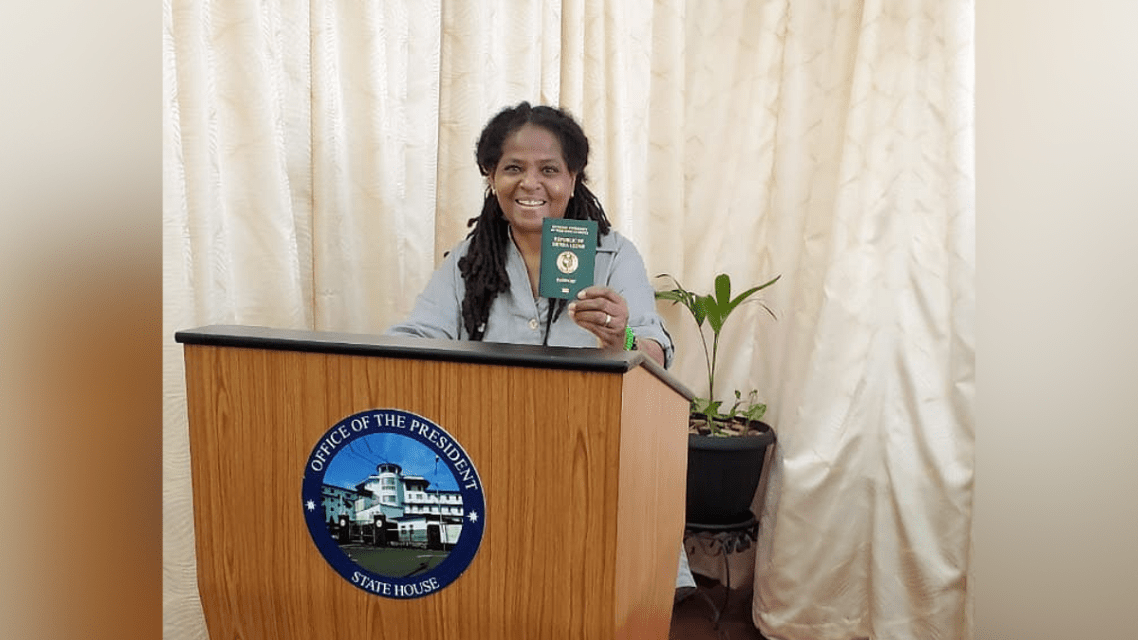 Born and raised in Riverside, LaTonia Scoggins, 58, recalls being fed mediocre images of Africa by the U.S. media that painted the continent as inferior and impoverished.

She says constantly seeing tropes of poverty and disarray formed her initial perception of Africa as a divided makeup of suffering countries.

The former UPS employee cites minimal early exposure to Africa, its history, or its many cultures. According to Scoggins, Black adults did not readily present information on Africa nor did she learn details (from anything other than through a colonial lens) in school. She challenged her own perceptions when an autoimmune disease left her unable to work, and rather than feeling sorry for herself, she made it a mission to travel Africa.

Stating that her first trip to Africa left her a changed woman, Scoggins has created her own perception of Africa through numerous extended visits to the continent. Last month, she and 21 other Black-Americans gained citizenship of Sierra Leone and were recognized during a naming ceremony performed by President Julius Maada Bio.

“It just means that we are one–one Africa–lifting Africa up to help it become one Africa,” Scoggins says about her individual journey of exploring pan-Africanism, or the movement of solidarity between all indigenous members and modern diasporas of African people.

Scoggins was prompted to seek citizenship after African Ancestry, a company dedicated to tracing people’s roots to Africa, traced most of her maternal ancestry to Sierra Leone and led her to a Facebook community of others also seeking African citizenship.

Scoggins and her cohorts were the second group of Black-Americans to participate in a naming ceremony hosted by Sierra Leone’s government; however, they will not be the last. According to Manstravel and Tourism is Life, the two companies that help Black-Americans gain their Sierra Leone citizenship, another group is scheduled for an official ceremony in April.

“This journey has not just been about feeling good. It has not just been about site seeing or just experiencing another culture. It’s not just about fulfilling your curiosity or satisfying some long-held dream of making a spiritual pilgrimage. It is about all of those together and even more,” said President Bio during the ceremony where he also issued Sierra Leonean passports and bank accounts to the new citizens.

Conversations promoting pan-Africanism and a “return home” have existed since the start of the Trans-Atlantic Slave Trade and were reintroduced during the Civil Rights Movement by prominent figures such as Malcom X and Marcus Garvey. A renewed interest in seeking to cement African roots among the Black community was reestablished by actor Isaiah Washington’s 2005 journey to return home during which he became a citizen of Sierra Leone.

Ghana’s president Nana Akufo-Addo began a more widespread trend when he declared Ghana’s 2019 campaign to be “Year of Return.” The campaign, which encouraged worldwide members of the African Diaspora to investigate their lineage, and invest and settle in Africa, commemorated the 400th anniversary of when the first Africans were taken from Africa and enslaved in the Americas. The World Bank and World Tourism Organization saw a 45 percent increase in travel, roughly 237,000 additional travelers, to Ghana in 2019 compared to the previous year, though unsure if this is causally related to the Year of Return.

Later that year Ghana held a ceremony granting 126 Black-Americans and Afro-Caribbeans Ghanaian citizenship. Since then, many Black-Americans have sought their ancestry and staked a claim to African citizenship. In spring 2019, comedian Tiffany Haddish gained Eritrean citizenship through her father’s bloodline. In fall 2019, actor Samuel L. Jackson traced his lineage Benga tribe of Gabon and received Gabonese citizenship.

When I think of Africa, I think of home.” Scoggins has already purchased an acre of land in Ghana and plans to fully relocate there within the next year. Sher cites her ideal situation as “owning a house in Ghana and renting an apartment in Sierra Leone.” She has been motivated to take this leap by her ancestral discovery; stating that though her connection to Africa was un-wavered following her first visit to the continent, the hard-copy confirmation of her bloodline has only strengthened that connection further.

“Recently, I am ashamed [to be American]. It’s like I’m carrying something, an identity, that doesn’t belong with me. I like the benefits and the education” of being an American, she explained but being Black-American is different. Living in the U.S., “I didn’t realize there was something better on the other side,” said Scoggins.

She encourages other members of the African Diaspora, especially Americans, to venture beyond what they are used to and explore pan-Africanism.