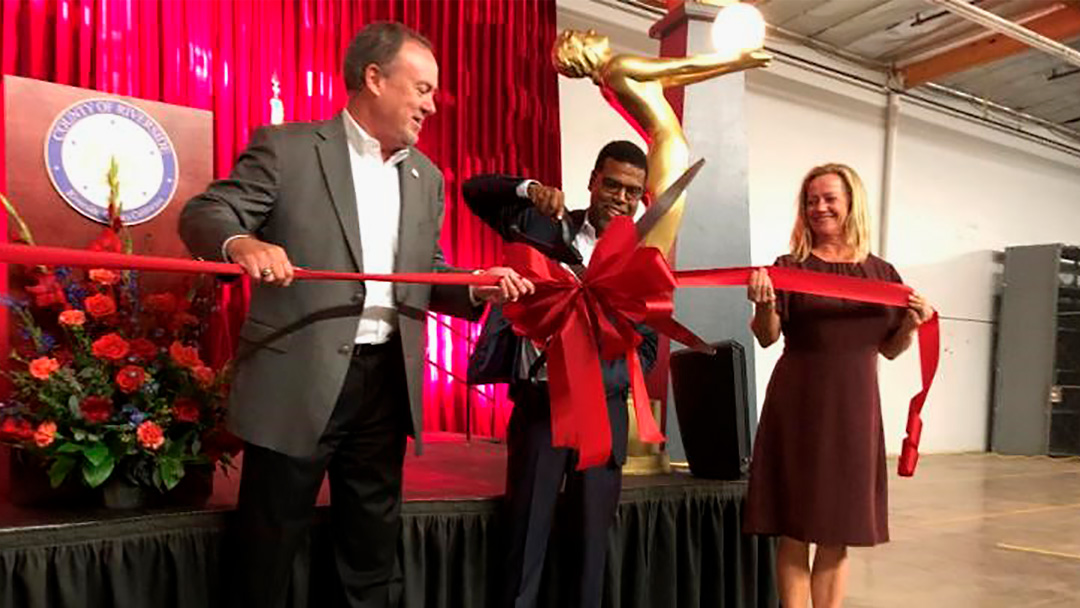 Just a couple of years ago the full feature film, My Name is Myeisha, swept the nation and was also received with high acclaim across Europe, winning several awards along the way.

The film, produced by University of California Riverside (UCR) Professor Rickerby Hinds, was based on his play, Dreamscape. Both the play and the movie were based on the 1998 shooting death of 19-year-old Tyisha Miller by Riverside police officers.

On Monday October 22, that vision, Riverside Studios, was formally launched with a ribbon cutting ceremony hosted by the Riverside County Film Commission.

In partnership with the County of Riverside Economic Development Agency, Professor Hinds, Chair of the Department of Theater, Film, and Digital Production at UCR, will oversee the facility with the assistance of Andrew Hardin, UCR graduate student in the MFA program for Screenwriting and Playwriting.

Not only is Hinds’ work globally recognized, he is heralded as a trailblazer in the inland region, influencing the trajectory of economic growth and expansion in the region.

The teams were comprised of R’Shorts (UCR), another team from UCR lead by Erendira Alvarez, a team representing RCC’s Film and Television (FTV), and SBVC’s team was led by Faye Hines.

RCC’s FTV team won the event’s horror sets’ competition with a gory, butcher-themed, blood-and-guts set which included “human like” hors d’oeuvres on toothpicks resembling chicken.  The award, a check in the amount of $2,500, was presented to the winners at the studio on Friday, November 2.

The LA Circus Prop House, familiar to many film makers in Riverside County, generously provided decor for the event valued at $4500.00.  Hollywood celebrity Ceasar Sebastain, best known for his role in “This is Us,” was also part of the guest list which included GambitOne Studios, Riverside County Supervisor Chuck Washington, the Honorable Cheryl Brown, Dr. Hardy Brown, Sr., Hinds’ wife, Dr. Paulette Brown-Hinds, and a host of family and friends and associates.

Speaking about the vision and promise of Riverside Studios, Hinds shared how he wants to provide more opportunities for residents of the region to participate in the film entertainment industry, noting that despite the area’s proximity to Hollywood, as a region the inland area was not well represented. “Because Los Angeles is practically in our backyard,” he emphasized, “the greatest challenge so far has been getting people and companies outside of the region to take this endeavor seriously.” 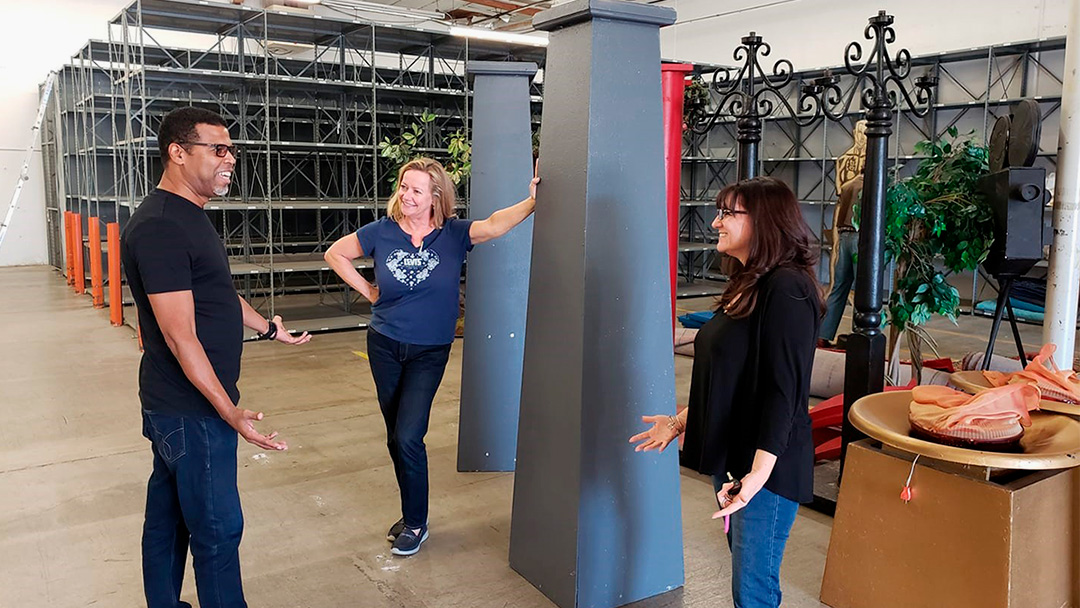 Andrew Hardin, who recently acted in one of Hinds’ UCR production titled, Birthmark, was one of Hinds’ former Hip Hop theatre students and a recent graduate of UCR. Hinds considered him a perfect fit to assist with bringing such a large vision to reality.

Hardin, who worked as a car sales manager after graduating, was contacted by Hinds to work on new projects and productions. This created an opportunity for him to work closely with Hinds on planning and launching Riverside Studios.

“It’s amazing how things work because fortunately for me,” Hardin confided, “the lead actors kept dropping out of Birthmark and Rickerby needed someone who was a professional that he could trust, so he reached out to me. I quit my job as a car sales manager and the rest is history.”

After production of Birthmark concluded, Hardin became a project manager for Voice Media Ventures and one of the projects happened to be the Riverside Studios. “I have been with him [Hinds] every day, assisting in making his vision come true for Riverside Studios,” Hardin stated.

“I have been truly blessed to come into this situation with a lot of support from Riverside County, especially Rob Field and his office with the EDA, and from film commissioners, Bettina Breckenfield and Stephanie Stethem with the Riverside Film Commission,” he added.

Hardin said from his perspective, “The planning process has not been too challenging. I believe that is the result of Rickerby’s vision and his persistence in trying to find a space that students and community members can come to learn how to make films and get paid to make them as well.”

Hinds envisioned Riverside Studios as a foundation for the development of original films using a multi-pronged approach to education, private investment, and government support. “I believe there is huge potential for building not merely a sustainable company, but a thriving one.”

“Our plan will also consist of upgrading the infrastructure of the space, continuing to provide shooting space for small projects, student projects, as well as regional film productions,” Hinds explained. “We will also be working with the Riverside Unified School District as well as other school districts to provide after school film workshops.”

Riverside Studios has a vision for the coming year that includes growing into a strong, tight-knit, creative community. “I envision us being busy telling stories, our own and those who need our help—teaching students how to be the best storytellers that they can be.”

Other goals, according to Hardin, include training students to be professionals in the industry and how to get paid for what they love to do. The studio’s goal includes not only making an impact in the Inland Empire, but also on the film industry.

“In the future, I see Riverside Studios expanding to a bigger space with maybe even satellite locations around the region. I see us being a trusted film studio for local and worldwide productions. I see us being a trusted film training center that produces top notch talent in all things film-related. I see Riverside Studios being one of the many things that make Riverside and the Inland Empire a great place to be. I see us changing the way storytelling is done and transforming who tells those stories,” Hardin proclaimed.

Riverside Studios will also serve as a learning space for film production, script writing, editing, sound production, grip and electric, set design, costume design, and so much more. Apprenticeships and courses will soon be available to students for course credit through UCR Extension and Riverside Community College.

The IE Voice will continue to provide updates and coverage on this historic entity.