Read With The Mayor 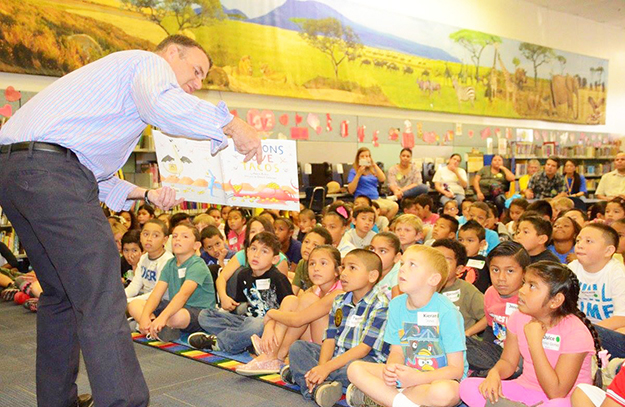 The “Read with the Mayor” program is the result of a new partnership between the Mayor’s Office and the Natlie A. Cole-Reagins Education and Cancer Research Foundation of Riverside.

As part of the event, students walked with teachers and foundation trustees from the school to the Eastside Library on Chicago Avenue in Riverside, where they were given an opportunity to receive a library card and hear a story read by Mayor Bailey. The students also received a brand new book donated by the Natlie A. Cole-Reagins Education and Cancer Research Foundation.

Cole-Reagins attended Emerson Elementary School as a child and later returned to the school as a teacher where she taught for thirteen years. Cole-Reagins died in 2007 of Sino Nasal Undifferentiated Carcinoma.

“Reading is a fundamental skill that was incredibly important to Natlie personally and as a teacher,” shared Bonnie Potts, Foundation Trustee and Riverside Unified School District teacher. Potts continued, “The Foundation is honored to work with the Mayor’s Office and Mayor Bailey to support this wonderful opportunity for the students of Emerson.”

The Mayor plans to announce the progress of the program as a featured speaker at the Foundation’s annual gala scheduled for April 23rd at the Riverside Convention Center.

For additional information regarding the Foundation, please visit www.natliefoundation. org.