RACISM UP THE HILL: They came to protest discrimination at Victorville’s Rancho Motor 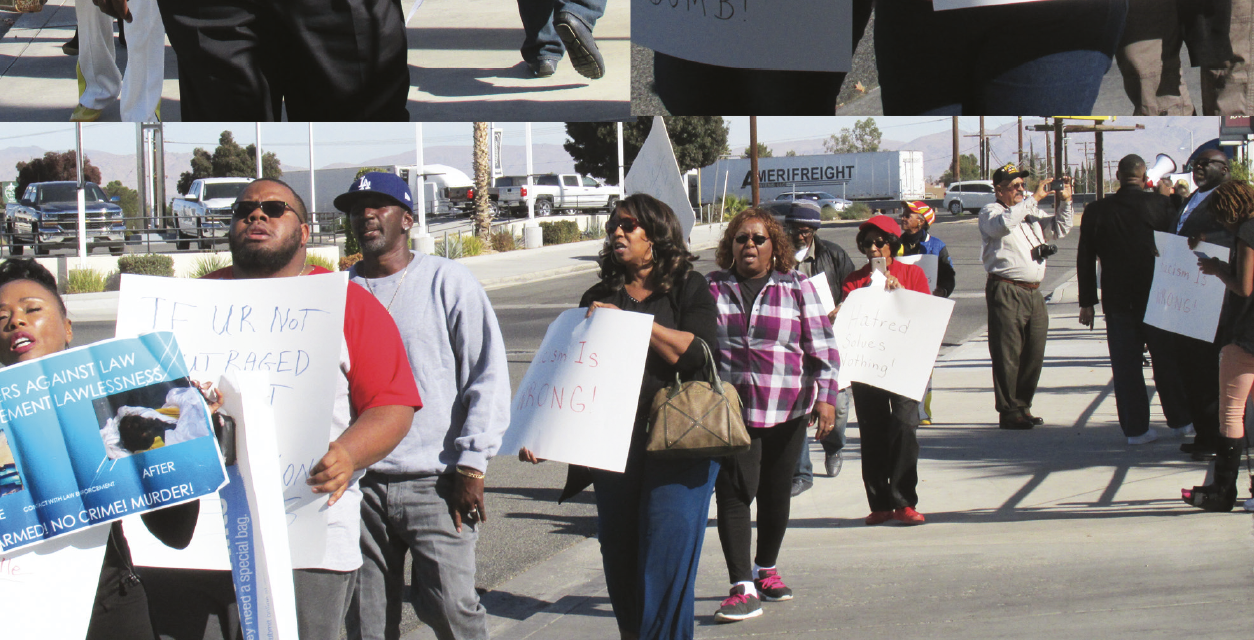 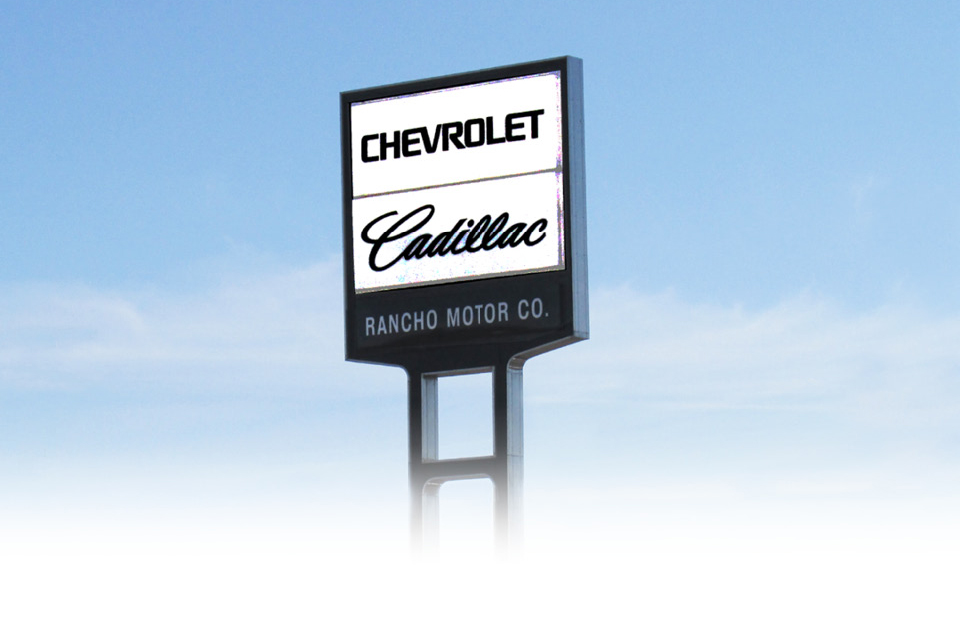 In a short period of time, about 50 people were lined up marching with signs in front of Rancho Motor shouting “No justice, no peace” and “Don’t buy no cars.” Protesters responded to questions from protest leader, Pastor Jonathan Moseley of the National Action Network (NAN) who shouted from a bullhorn asking, “What do we want?” Marchers responded “justice!” Moseley: “When do we want it?” Marchers: “Now!”

The protest was in response to a recently leaked tape of a meeting held at the dealership where sheets, gasoline, and a noose were directed toward an African-American woman customer; two pending lawsuits alleging the GMC Dealership has demonstrated a pattern and practice of racial, sexual preference, and gender discrimination toward its employees and customers; and the breakdown of discussions between Rancho Motors and members of the NAACP and NAN to reach a satisfactory resolution.

In an interview with The Voice/Black Voice News, President of the Victor Valley NAACP Bill Thomas explained, “Our intent today is to do a peaceful protest and hopefully we’ll move a little closer to maybe getting things resolved.”

“In all fairness to the dealership now, we have met with the owner and we have come close on some issues,” Thomas shared explaining the core issue is “the apology to the community” and while he understands their reluctance due to pending litigation, “still there are people in the community and our membership who really want to see closure.”

“We’re hoping that after this we can come back to the table and maybe get some things resolved, if not we’ll be back, we’ll do it again, it’ll be bigger,” Thomas promised explaining many at the NAACP are “all over the age of 60” and remember the civil rights era and the fights and strides made. “What was done was so wrong we had to do something to stand up to it and this is our attempt.”

Thomas decried how Rancho Motor is treating Blacks: “calling us names as if that’s a game, as if it’s funny and it’s not funny to us, it’s not funny that they are making jokes about LGBT or any people of color [including] Latinos.”

Thomas explained they would like to see Rancho Motor take some ownership of the issue by implementing better diversity training, including face-to-face training, changing their behavior, employing more minorities, especially African-Americans, having more philanthropic involvement with the minority community, ensuring the community feels respected when they come here, continuing a dialogue to infuse new ideas, and getting more people of color involved.

“Rancho Motor and the NAACP and community groups are going to have to come together and resolve this until the community feels they are being respected and treated right,” Thomas concluded.

Clifton Harris, publisher of the San Bernardino American News, shared, “Myself, the president of the local NAACP in Victorville, and vice president met with Mr. Wilkins in an attempt to come to some kind of satisfactory agreement that would stop the protest and he basically said he would get back to us in a couple of days.”

“He got back to us in a couple of days and the letter he wrote us was not satisfactory at all,” Harris opined. “In fact he basically responded as though he were the victim in the letter and the problems with the litigation and things of that nature. He just said there was nothing he could do, he was already doing sensitivity training he said and the rest was in court and he couldn’t discuss them.”

Harris revealed they have “tapes” of “management meetings” where African-Americans are referred to as “nigger” and there was discussion about an African-American customer who had been “complaining in the service department” and how “they would put a hangman’s noose in the car,” “maybe that would stop her from coming back,” and if that didn’t work they would just “put a white sheet over her and set her on fire.”

“We just can’t accept this behavior on the part of a local business and we intend to see what local elected officials are going to continue to support this guy by taking money from him in their campaigns,” Harris concluded. 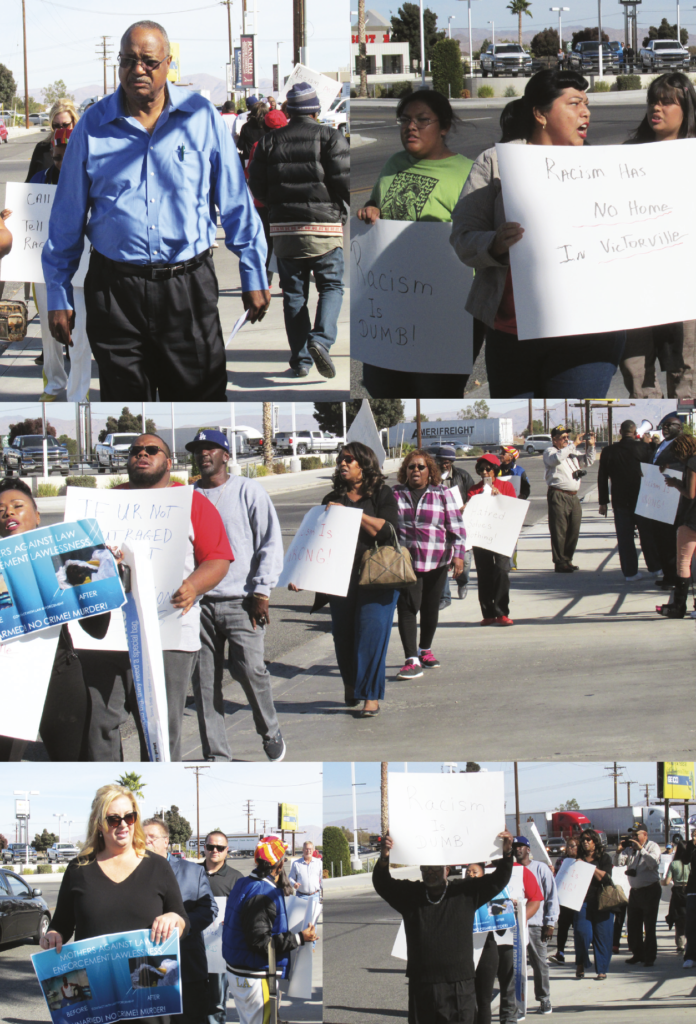 (Top) In the foreground is President of the Victor Valley NAACP Bill Thomas on Friday, November 10, leading a line of protestors in front of Rancho Motor Company located in Victorville where it is alleged discriminatory practices are occurring. Several protesters one holding a sign saying &ldquo;Racism has no home in Victorville&rdquo; as well as chanting. (Middle and bottom left) A line of protesters in front of the dealership. (Bottom right) In the foreground is NAACP Treasurer Frances Pichon followed by Pastor Jonathan Moseley of the National Action Network. (Photos by Gail Fry)

NAN President of the Watch Chapter, Elder Michael Cummings, shared, “We’re here to come out and bring out some awareness to some racism, some civil rights issues here with Rancho Motor, the dealership here of not treating African-Americans or Latinos right.”

Cummings referenced a meeting held at Rancho Motor, where, in response to a customer complaint by an African-American woman, management referred to her as a “Nigger B####,” and somebody else said “bring out the sheets and the gasoline” when a participant at the meeting who is half African-American expressed his discomfort with the conversation and was, in turn, fired.

“We wanted to bring awareness to the people that are actually dealing with them because they may not know the situation,” Cummings reasoned. “All the people that’s involved with this situation here want an open apology and let’s rectify the situation, we are here today, this is 2017, racism should be well gone, but just to let you know racism is still alive here.”

“When you talk about bringing out the sheets and burning the crosses and stuff like that it’s unacceptable in our community [while the dealership is] trying to make a living selling cars and Cadillacs,” Cummings said. “I think he should sell the dealership, I think GMC should pull his franchise [or have someone] with the means put another dealership here that sell Cadillacs that can really deal with people the right way.”

“So that’s why we’re here today,” Cummings confirmed, crediting the National Action Network founded by the Reverend Al Sharpton, Reverend K.W. Tulloss, the Western Regional Director Reverend Mosely, along with the NAACP and community members and churches for protesting today. Cummings can be reached at: watchchapter@gmail.com.

Dr. Loren Due shared his experience at Rancho Motor with The Voice/Black Voice News, where he was a customer with “not the best credit” purchasing a 2012 Chevrolet Malibu. His interest rate was 25 percent and the car had “a lot of challenges.” Due explained they weren’t aware at the time they purchased the car that Rancho Motor monitored Black customers assigning them a code to where Black customers were getting a “different contract,” objecting “it’s not right.”

Barbara James, editor for the High Desert Inland Valley News, shared, “We are here today to shine a light on injustices that have been practiced throughout many companies here in the high desert.”

“It has been alleged that Rancho Motor has been discriminatory in their employment practices and also in their consumer practices,” James voiced. “They have engaged in discriminatory language, racism on the job, they haven’t even met a quota at all as far as employment is concerned, they have very few African-Americans and Hispanics that are employed with their company.”

James alleged Rancho Motor “would quote one price” to the customers on “paper” and then “go back to their office and reverse prices” and “increase interest rates” to “unknowing” customers and “these are practices that need to stop.”

James concluded, “We are just here to shine a light and let them know that they are not to continue to do business in our community the way they are doing it now.”

Attorney Tristan Pelayes, representing the two former employees of Rancho Motor suing the company, objected, “What the dealership did is wrong, what they are still doing is wrong.”

Pelayes described the protest as “historic” opining “it’s never happened ever in the history of the high desert where we have a protest, demonstration” in this case against racism, explaining its importance to the community. “Historically, the high desert has been the land that time forgot,” observing, “it’s catching up, it’s catching up.”

“I’m proud that people showed up to support Mr. White and Mr. Williams who are the people bringing the case against Rancho Motor,” Pelayes voiced. “The words that they used in describing minorities, it’s just shameful and it shouldn’t happen in 2017 and we’re going to make sure it doesn’t in 2017.”

The Voice/Black Voice News observed a Rancho Motor employee taking photos of the protesters during the event. A call into Mr. Wilkins to provide an explanation of the purpose of taking the photos went unreturned as of press time. The protest was organized by the Victor Valley NAACP, the National Action Network LA, and the San Bernardino American News.