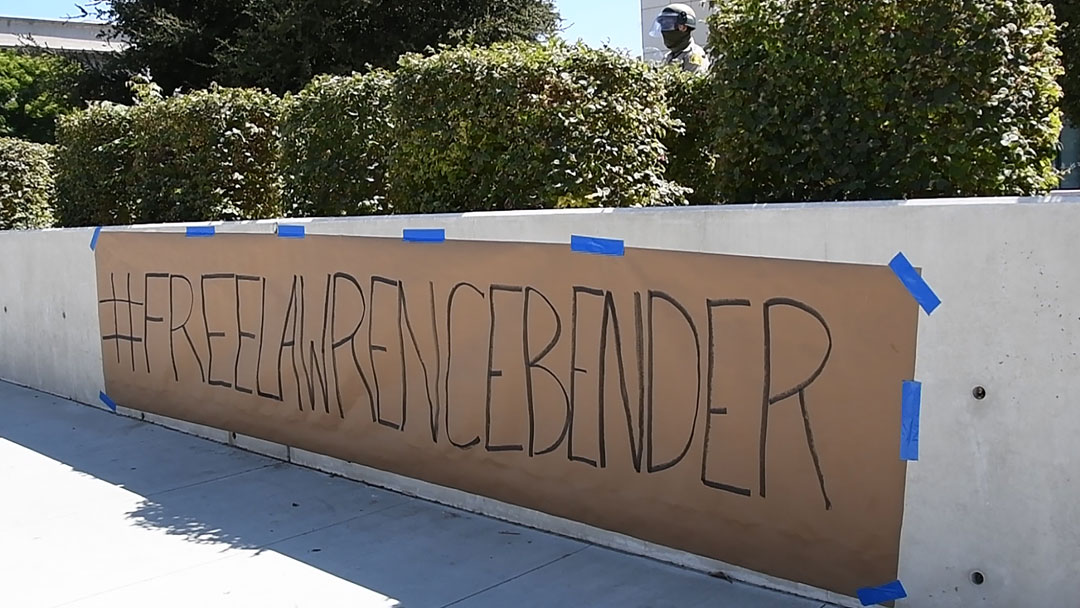 Tensions were high outside the San Bernardino Justice Center early Friday morning, July 31 when protesters were met with the full force of the Sheriff’s Department.

Members of the Black Lives Matter IE chapter and members of the IE community were present to support Lawrence Bender on his court date, as they were on his previous court dates. Bender is a 29 year old Black man who was convicted of resisting arrest when he was shot twice by Rialto police officer Michael Babineaux in June 2019.

Bender’s family and community members have been fighting for Bender’s release since they found out about the incident two weeks afterward.

Several community members showed up at approximately 8:30 a.m. when the protest was scheduled to begin. However, demonstrations did not begin until about 9:10 a.m.

Just a few minutes after a member of the Black Lives Matter IE chapter was given a megaphone, a sheriff attempted to serve him with a general court order stating that the growing crowd was not allowed to protest on the property. When he refused to accept the order, two sheriff employees advanced to arrest him.

Things quickly became violent when several protesters attempted to help the man but several more sheriff employees intervened and began pushing protesters back. Another person was taken into custody at this time after being shoved several times by a deputy.

Protesters began filming the officers and yelling at them to release the two people that were taken into custody.

By 9:40 a.m., more than 15 sheriffs in riot gear arrived and about seven more individuals were arrested. Some protesters noted that most did not have body cameras, however, there were two sheriff employees filming with GoPro cameras.

The Black Lives Matter IE Facebook page mentions that one member was followed while en route to their vehicle and arrested “in front of the law office representing Mr. Bender for allegedly committing vandalism with chalk.”

A total of 11 people were arrested outside the San Bernardino Justice Center during the protest. The arrests did not deter protesters. In fact, they occupied the Arrowhead Avenue and 3rd Street intersection, blocking traffic until the San Bernardino Police Department showed up to attempt to disperse the crowd onto the sidewalks.

Shortly after 12 p.m. Bender’s attorney, Peter Schlueter, met with the crowd to update them on Bender’s next court date which is set for August 28, 2020.

“One of the things I don’t understand is why the District Attorney’s office supports the police officers over the lives of individuals,” Schlueter said. “That officer was never in danger… It was a bad shooting and the District Attorney should acknowledge that and move on but they’re not.”

Schlueter went on to say that he believes that the protesters’ movement is having an effect in the courtroom.

For more information on how to support Lawrence Bender and his family, visit https://bit.ly/3fsPpsi.