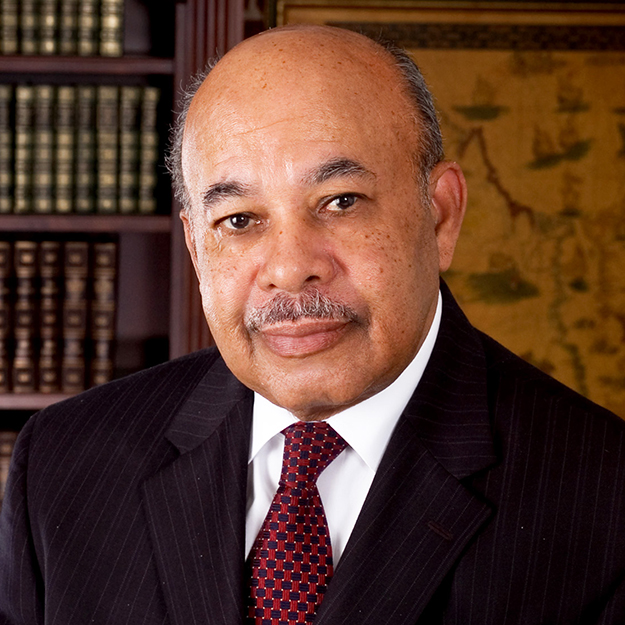 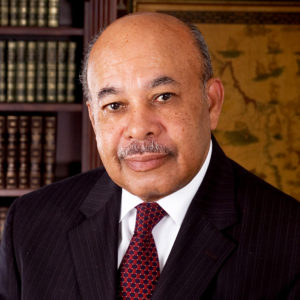 Ward Connerly Reflects, “I was True to My Convictions…”

In the nearly 20 years since the passage of Proposition 209, former University of California Regent Ward Connerly remains confident in his belief that affirmative action is not necessary.

The Cambridge Dictionary defines perception as, “someone’s ability to notice and understand things that are not obvious to other people.”

This was the dilemma faced by former UC Regent Ward Connerly, an African American who attained a highly respected position of prominence and then used the bully-pulpit of his position to advocate for the dismantling of a signature achievement of the Civil Rights era— Affirmative Action and its use to help facilitate minority admissions to California’s University (UC) system.

It 1996, it became clear Connerly was not alone in his perception. Fully 54 percent of California voters approved Proposition 209. It struck down race and gender-based affirmative action programs much to the dismay of African American and other minority communities who did not perceive affirmative Action in the same light as Connerly. Nearly twenty years later, the chasm in perception persists.

Having left an indelible mark on the history of California’s UC system, today Connerly is President of the American Civil Rights Institute, a national, not-for-profit organization he founded that is aimed at educating the public about the need to move beyond race and specifically, racial and gender preferences.

As Proposition 209’s (209) twentieth anniversary rapidly approaches, Connerly recently agreed to an exclusive interview with Voice Media and spoke openly about his advocacy for the Proposition; whether it has met his expectations; what he hopes his legacy will be relative to it.

“I was born in the deep south, in Leesville, Louisiana, in 1939,” he began. “Therefore, I have personal familiarity with racial discrimination— and, it’s wrong.” Over the years, Connerly shared, he came to realize that what is called affirmative action, especially at the university level, in his view is a system of discrimination. “I find that to be equally wrong,” he asserted.

“As a UC Regent, who was a fiduciary, I took action to right what I saw as a wrong. I did this a year and a half before 209 came along.” He continued, “I do not have to look past my own multi-racial children to see that when our government draws racial lines through the people, that line runs directly through my family, and no one has the right to do that.”

According to Connerly, 209 has lived up to his expectations. He explained he never had any delusions about what 209 would accomplish and whether the attainment of its objectives would happen overnight or in a couple of decades. “I never imagined this road would be an easy one and it hasn’t [been], but it provided a platform that we can build upon. It has forced many government agencies to re-examine their policies and it has triggered court decisions challenging the constitutionality of race preferences. It has enabled us to underscore that affirmative action is not necessarily affirmative—thus, the term, preference. Preferences were well established by the 1990’s, and I wanted to start the process of going back to the days when America aspired to be a ‘colorblind society’. I had hopes that 209 would accomplish that.”

Although 209 may have lived up to Connerly’s expectations, there are untold numbers of African American and other minority students who come from disadvantaged backgrounds and strived for access to the UC system to no avail. To this he replied, “I was hoping that our society and especially Black students and their families, would understand that the crutch of race preferences was being removed and that substantially increased efforts would go into academic preparation.”

He continued, “Being ‘disadvantaged’ is a convenient excuse that should be rejected. The outcome has been disappointing, because very little change in the paradigm has occurred. The presumption of [being] ‘disadvantaged’ still exists.” He pointed to other ethnic groups, including some Whites, who are also disadvantaged.

When the playing field is even and they are given access, many minority students from disadvantaged backgrounds successfully compete academically. When Connerly was asked how he weighed this in the context of 209, he provided an example of how Chinese and Vietnamese kids who barely speak English and are very poor, attach great priority to learning and frequently excel; while, on the other hand, he asserted, “Blacks and Hispanics are presumed to be disadvantaged, yet, some often have few of the obstacles of many immigrant groups. Something is dreadfully wrong with this line of thinking and the rationale highlighted by this question,” he concluded.

Some wonder whether an improvement to the quality of education in low income areas could have minimized 209’s impact on minority groups. “The problem lies in the culture of the family.” Connerly insisted. “Until that culture is changed and Black/Hispanic families attach greater importance to academic learning instead of placing blame on high schools, little will change.”

“In 1995, when the UC regents ended race-based affirmative action, an elaborate ‘outreach’ effort was initiated. This effort included partnerships between UC and ‘underperforming’ schools, greater mentorships, and a shift from race to socioeconomic factors. This outreach component has been beneficial; but again, the family unit and Black culture with respect to academic endeavors must be dramatically altered.”

One example however, that conflicts with Connerly’s assessment is that it took a lawsuit by minority students and their parents in Los Angeles to expand access to Advanced Placement courses. Such courses give students an opportunity to take high-level classes for college credit and provides an added advantage for college admissions.

Much has been written about diminished diversity on UC campuses in the wake of 209. To which Connerly posited, “The claim of diminishing diversity is very debatable. Diversity is a term often used to suggest fewer Black students on campus than the user of that term desires. In reality, every UC campus is quite diverse.”

Some may argue however, that HBCU’s account for only three percent of the country’s institutions of higher learning and graduate only 20 percent of Black students who earn college degrees—not all of the other 80 percent receive attractive financial packages to selective institutions and most could benefit from the financial advantage of an in-state tuition. 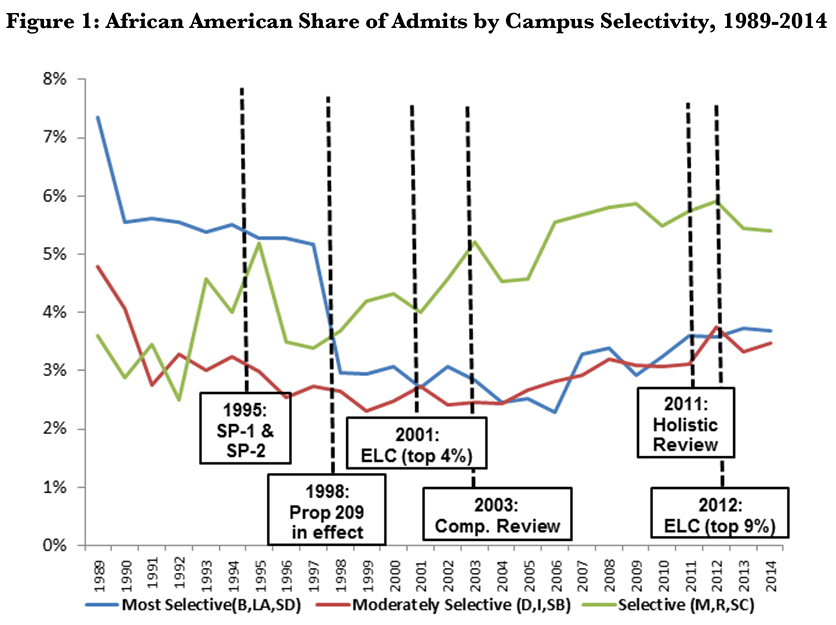 Earlier this year, a state audit revealed that since 2010, qualified and more competitive minority candidates were passed over for admission to the UC system and less competitive, international candidates with lower GPAs were admitted instead. Connerly explained this affront as merely a budget issue, “If the data is accurate, this phenomenon exists because of financing. To balance its budget, UC admits a number of out of state students who pay more in fees than California residents. This is a function of the budget.” This does not, however, explain why minorities were primarily impacted by this economic strategy.

Connerly endured a lot of criticism for his advocacy of 209 including concerns about his motives. “I was sustained by my abiding belief that all Americans should be held to the same standard, regardless of race, color, ethnicity or sex when they seek admission to a publically supported university and my belief that racial discrimination by the government is wrong.” He continued, “The most inaccurate claim was that I didn’t care about the plight of Black kids or that I was seeking to visit harm upon them. This could not be further from the truth. My goal now, and has always been, to return to the tenets of the 1964 Civil Rights Act—namely, that no American will be treated differently because of race or skin color.”

“The rationale of using race-based affirmative action is not a constitutionally acceptable use of race according to the United States Supreme Court,” Connerly stated. (This interview was completed previous to last week’s Supreme Court ruling in the Fisher vs. University of Texas where the Court determined the university’s ‘race-conscious admissions program’ is constitutional). 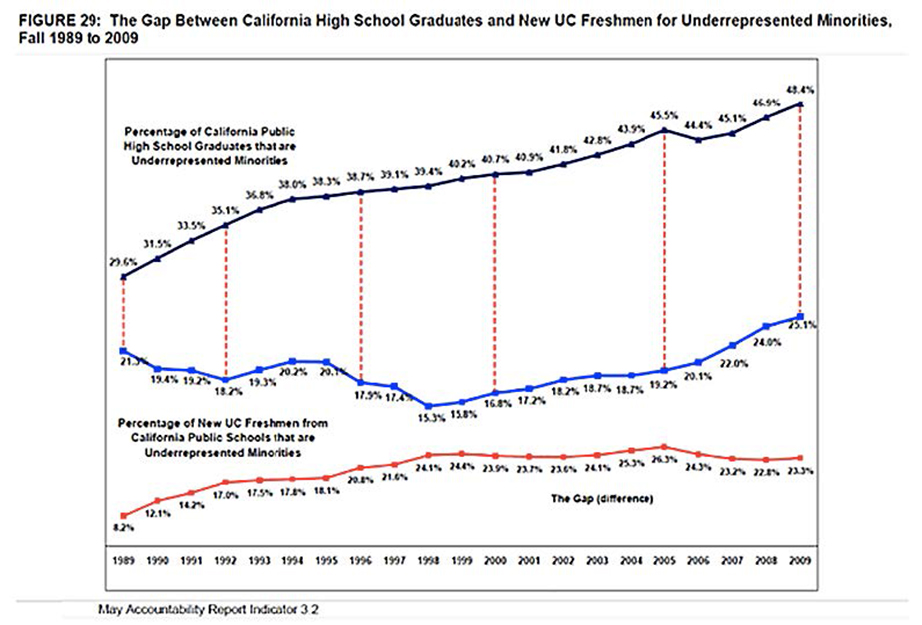 “Education is very important,” Connerly stressed when asked what message he would give African American students to prepare themselves to more successfully compete for admissions to the UC system. “To take advantage of this opportunity all students must be academically prepared. This means that all students must do three things: Study, study, and study,” he offered.

According to Connerly his only disappointment with 209 was, “the failure of the Black ‘community’ to take the necessary steps to become academically self-sufficient. The desire to learn has to be instilled by the family. The family unit is our children’s first teachers. They have a great responsibility to start their children on the path to higher education, as a society we need to do whatever we can to help our families do that.”

When asked what he would like his legacy to be Connerly responded, “That I was true to my convictions that no one should be discriminated against because of race, color or gender. I believed then, and still do believe, that we can achieve a colorblind society if the government stops discrimination on the false premise of leveling the playing field.”