New Report, Old Cliché: “The Hazards of Driving While Black” 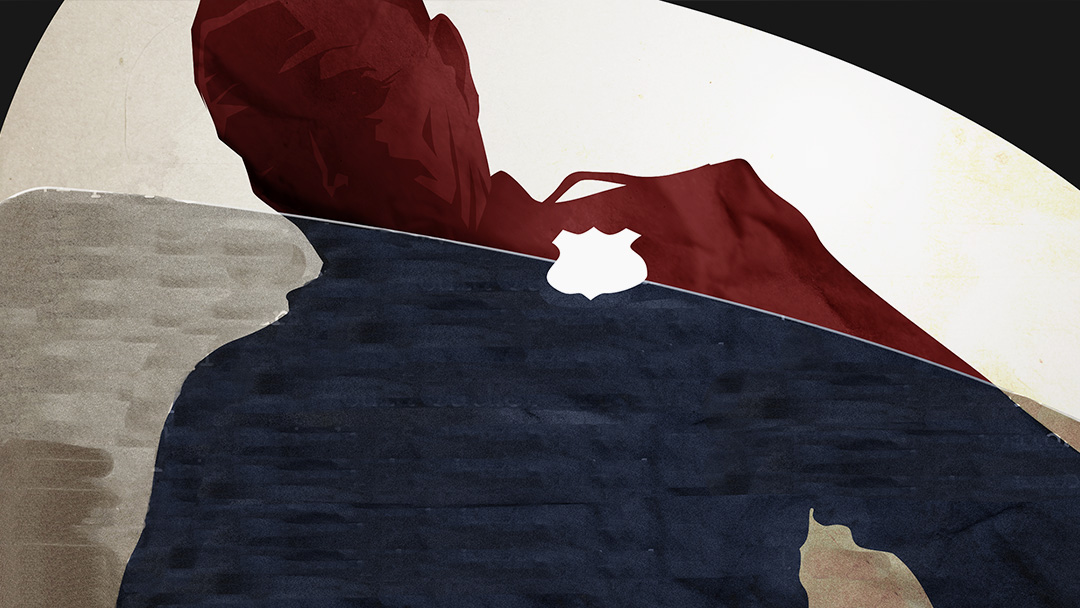 A newly released statewide report has reaffirmed what other reports have stated and what African Americans have known and expressed based on a long history of personally challenging, economically damaging and sometimes deadly experience—that Black drivers are stopped and searched by police more than any other group of motorists.

As noted by Sahar Durali, Co-Chair of the Board and Associate Director of Litigation and Policy at Neighborhood Legal Services of Los Angeles, there was something unique about this year’s report, For the first time ever, Californians have comprehensive racial and identity data on each stop and search conducted by police officers at the largest law enforcement agencies in the state.”

Data for the report was accrued based on the analysis of about 1.8 million Californians involved in vehicle and pedestrian stops conducted by the state’s eight largest law enforcement agencies during the second half of 2018.

“This is a critical first step in the fight to end racial profiling. The findings of this data as laid out in the 2020 Board report highlight the need for the policy recommendations of the Board, said Sahar Durali, Co-Chair of the Board and Associate Director of Litigation and Policy at Neighborhood Legal Services of Los Angeles. 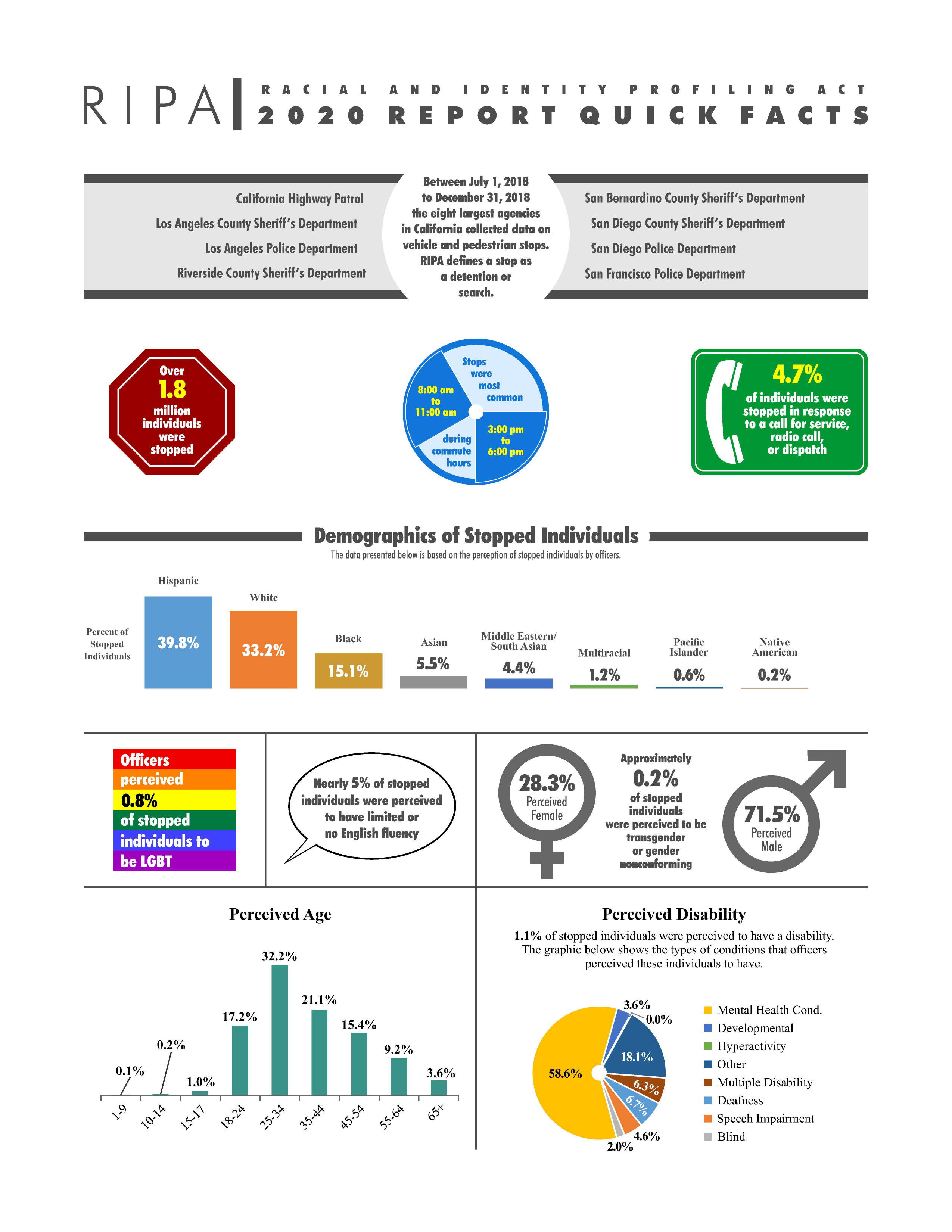 Across all racial and ethnic groups, the most common reason peace officers reported for initiating a stop was a traffic violation (84.4%). In this regard, people who were perceived as Black were considered overrepresented in the stop data. According to 2018 US Census Bureau estimates Blacks account for 5.8 percent of California’s population they accounted for 15.1 percent of individuals stopped by police.

Not surprisingly, the police also appeared to target Black men between the ages of 25 and 34 years of age. RIPA data revealed Black men in this age group were the ones most often stopped by the police.

This “search” is a red flag for two reasons. Firstly, “search yield data” (which refers to the proportion of individuals that officers searched who were found to be in possession of contraband or evidence) helps flush out bias where data shows a certain demographic is searched more than others but with fewer instances of contraband found.  And secondly, this year’s report plainly showed this is exactly what is happening everyday across California.

In other words, although officers were more likely to find contraband when searching White drivers at a rate of 24.3 percent—White drivers are still searched less frequently. In the meantime, although people of color had lower yield rates of contraband or evidence—Black drivers were searched at rates 2.9 times the rate of people perceived as White even though their search yield rate was lower at 22.5 percent.

“It becomes more and more difficult to avoid the idea of Black men [and women] as subjects of not just racial profiling but of an insidious form of racial obliteration sanctioned by silence.”
– Aberjhani, Illuminated Corners

There are usually consequences when individuals are stopped by police and here again, the report revealed evidence of disparate treatment. White drivers are more likely to escape their police interaction with a citation while Black drivers are more likely to be arrested. For example, Black drivers were arrested in about 15 percent of all stops while White drivers on the other hand were arrested only 11 percent of the time. Blacks received citations in 37 percent of stops while the citation rate for White drivers was about 50 percent.

These however are only the immediate consequences of Blacks being stopped more frequently by police. A study, Race, Representation, and Revenue: Reliance on Fines and Forfeitures in City Governments published in March 2019, looked at a representative sample of 93 California cities from 2009 to 2014 to determine what affects how much cities fine residents and rely on fines for revenue.

The study found that “[C]ities’ reliance on fines and forfeitures is not associated with budgetary need or public safety service provision but is associated with the race of the population and the racial composition of law enforcement.”

Such revenue burdens are usually borne disproportionately by African-Americans due to racially biased policing—including as in the RIPA report they are being consistently overrepresented in traffic stops and citations. The overburdensome rate of traffic stops and citations too often leads to a cycle of fines, suspended licenses and more fines on low-income members of the Black community.

A Look at the Inland Region

There were 42,100 police stops in Riverside County during the six-moth study period. Although Blacks are only about 6.2 percent of the county’s population, nearly 12 percent (11.82) of police stops involved Black drivers. Riverside County Sheriff’s Department received a total of 46 complaints in 2018, four of them (nine percent) were triggered by concerns related to profiling.

Although RIPA officials were quick to point out how there are important limitations and caveats for each methodology used in preparing the report that should be kept in mind when interpreting the data, the information collected includes data on peace officers’ perceptions of the demographics of individuals stopped by officers.

“The purpose of collecting information on officer perceptions is to attempt to systematically document and analyze stops and searches to determine whether disparities can be found across demographics,” they noted. As such, beyond characteristics related to race or ethnicity, the demographic information collected included information regarding gender, age, disability status, English fluency, and LGBT identity.

When the report was released, RIPA Co-Chair and Kings County Sheriff Dave Robinson on behalf of the board expressed support and appreciation for the difficult job the men and women of California law enforcement do every day adding, “The report is just the beginning of information that will allow even greater transparency for law enforcement and our communities, allowing us to grow together working on local and statewide areas of concern.”

Durali added, “We encourage law enforcement agencies to work with their communities and utilize the RIPA data to make meaningful changes to their policies, practices, and operations. The Board looks forward to partnering with agencies, community members, and advocacy groups in those efforts.”

California Attorney General Xavier Becerra stressed the importance of good data noting it is a critical component of making good policies as he introduced his department’s new online dashboard designed to help make important criminal justice information more accessible to everyone in the state.

“Here at the California Department of Justice, we’re committed to doing our part to increase transparency and accountability to help strengthen trust between law enforcement and communities across our state,” Becerra concluded.

The entire 97-page RIPA report is available online at oag.ca.gov under “racial profiling”.