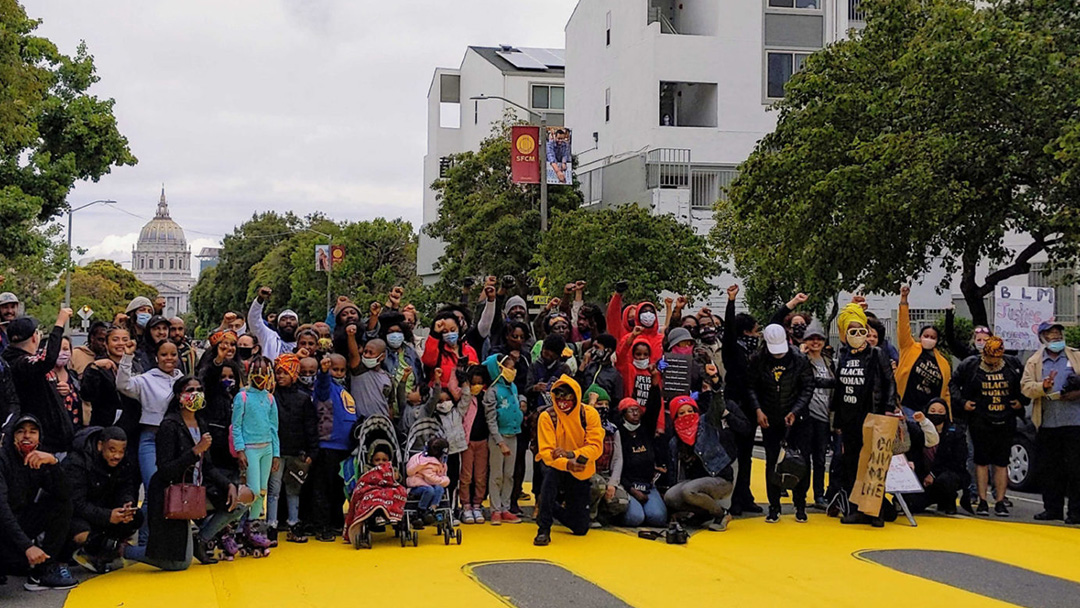 MegaBlack SF sent the following letter to San Francisco Mayor London Breed on July 10, signed by many of the city’s most influential Black leaders. The group has asked for a meeting with Mayor Breed by July 24, 2020.

The signatories below are members of MegaBlack SF, a collective of Black-led organizations and Black individuals fighting for visibility, sovereignty, dignity and justice for Black San Franciscans. We are specifically fighting for economic power; equitable and restorative investments in public education for Black students; land for our businesses, cultural events, and wealth building opportunities; consequences for anti-Blackness, from discrimination on the job to police violence; housing and an end to the displacement of Black people from San Francisco; and reparations for government policies that have uniquely disrupted and harmed the Black San Francisco community.

Thank you for your leadership and bold statements of support for the Black community in San Francisco in recent weeks. Amidst a global pandemic and the recent, tragic reminders of unchecked racial violence against Black bodies, we appreciate your unwavering voice and commitment to progress. As you are keenly aware, racist policing and a lack of accountability for police misconduct have led to an unconscionable number of deaths, injury and physical as well as psychological harm to Black people. We are finally at a point of reckoning for our unaddressed history and policing’s roots in slavery, both echoing into the modern-day practices in and relationships with Black communities.

In alignment with your recent announcement of the City’s intention to reallocate budget dollars from SFPD to the Black community, we offer the following reform recommendations to reduce the harm inflicted on Black communities and Black residents in San Francisco:

Invest in early childhood and elementary education – That Black students in San Francisco have the worst academic outcomes in the state is unconscionable. We must direct at least 50 percent of all police budget cuts to improve outcomes for early education and youth development for Black youth in San Francisco. This includes additional resources that are specifically targeted to subsidized and accessible pre-K and elementary schools, after-school programming, summer youth and enrichment programs that show children the City beyond their neighborhoods, early childcare programs that prioritize Black children and youth, hiring Black teachers and therapists, and other data-driven community-based early childhood interventions to improve education and developmental outcomes for youth between age 0 and third grade.

Research has consistently shown that if we invest early and heavily in this arena, we reduce youth involvement in the criminal justice system and, hence, reduce negative interactions with police. We must also remove all police from school settings and disallow police calls on children.

Invest in behavioral health emergency response – When directing funds away from the police department, we must ensure that the proper community-based resources and supports are able to respond immediately to mental health and substance use crises when they occur. Behavioral health emergencies within the Black community most often result in police intervention that leads to physical confrontations, brutality and often death because police are not social workers, psychiatrists or trained in the necessary tactics to handle people struggling with behavioral health issues.

Therefore, when residents call 911, we must ensure that properly trained professionals (e.g., LCSWs, psychiatrists and others) are dispatched to de-escalate crises when they arise and can shepherd people into the proper treatment facilities and services available. This will reduce police interactions with the rising number of people struggling with addiction and mental health challenges and will help ensure that residents get the proper treatment that is needed – instead of entering the criminal justice system, or worse.

Prosecute officers for excessive use of force – In 2019, California passed AB 392, which establishes new standards for police officers’ use of deadly force. Currently, an officer who violates these standards is not necessarily subject to criminal prosecution.

This cannot remain the case in San Francisco. The City has the authority to, and must, take action to raise the standard of conduct for police officers in our City by imposing criminal penalties for those who use excessive and deadly force. This is particularly needed when unarmed people are killed by police officers. This is the only way to effectively deter future instances of unjustifiable force being used on Black people, and to hold violators accountable for their actions.

Cut the police budget by an amount commensurate with the work they will no longer perform – Prior to your announcement, all City departments were instructed to cut their budgets by 10-15 percent. At minimum, that would mean cutting the SFPD budget by $70 million to $105 million from their $700 million budget.

We are asking that you redirect at least $105 million from the SFPD budget to support the recommendations outlined above. We cannot ask police to be all things: mental health providers, social workers to domestic disturbances, counselors to rape survivors, and back up for teachers with unruly students, along with asking them to interrupt property crimes. Cops are undertrained, over-armed and overutilized for social needs that do not require armed response.

Develop and conduct a landscape analysis. We request a thorough assessment of 911 calls by month for the last five years to determine the percentage of calls justifying police interactions with the public. We also request that the City establish a process over the next year to analyze the budget and functions that law enforcement performs – specifically, data on deployment, calls for service, arrests and resulting charges. This will give us a sense of where policing happens most and for what.

Then we can take that to begin to determine what elements of policing practices might be performed differently and by whom. There is no doubt that policing tends to be concentrated in neighborhoods that are least resourced and it is there that reimagining begins once we know what the majority of calls for service entail. Are they 311 type calls or are they calls that involve some type of dispute resolution that is tending towards violence? In this regard, it is important to unpack procedures regarding particularly car stops and domestic violence calls.

This landscaping and groundwork should be done with community partners including perpetrators and victims. The team of folks will then need to develop alternative responses and structures to custody, control and suppression policing.

Set aside budget for reimagined community safety and restorative justice. We know that the community and interpersonal violence experienced by Black San Franciscans is the result of generations of systematic racism and economic exclusion. Black people want and deserve to feel a sense of safety in their communities.

Rather than funding police who may bring violence and harm into our communities, reimagine community safety by investing in communities themselves to determine what they need and to offer them support in executing those programs. Establish a moratorium on all nonviolent arrests and support harm reduction approaches.

Employ properly equipped, non-violent, community care workers trained in restorative justice as neighborhood resources at salary levels commensurate with those of police and law enforcement. For this work, mandate allocation and participation from departments in Human Services, Public Health, Recreation and Parks, Children, Youth and Their Families, the Office of Economic and Workforce Development and the Office of the Public Defender.

We recognize that there are other communities in San Francisco that have been disparately impacted by overpolicing, police violence, and the sometimes fatal consequences thereof. We are committed to working collaboratively for the betterment of all in the City but want to be clear that we believe the only way that we will all be better off is if we directly address systemic racism and, explicitly, anti-Blackness in San Francisco policing.

MegaBlack SF stands ready to support and offer further guidance and input into each of these recommendations to ensure that San Francisco establishes a new standard for community policing in America. Please see us as a resource; we look forward to further discussions and opportunities to help reshape and reimagine the vibrant future of the Black community here in San Francisco.

We respectfully ask for a meeting with you to further discuss how we might support you in this work and have our recommendations included and look forward to a response by July 24, 2020.

Brittany Ford, Director of Mo’MAGIC, Office of the Public Defender

Shanell Williams, President, Board of Trustees at City College of San Francisco

Header Photo: Painters and supporters of the Black Lives Matter street mural on Fulton Street between Webster and Octavia celebrate the June 10 completion of their work to create a permanent daily reminder of a truth most citizens of San Francisco, dubbed “capital of anti-Blackness,” reject, judging by their actions. – Photo: Anna Vignet, KQED