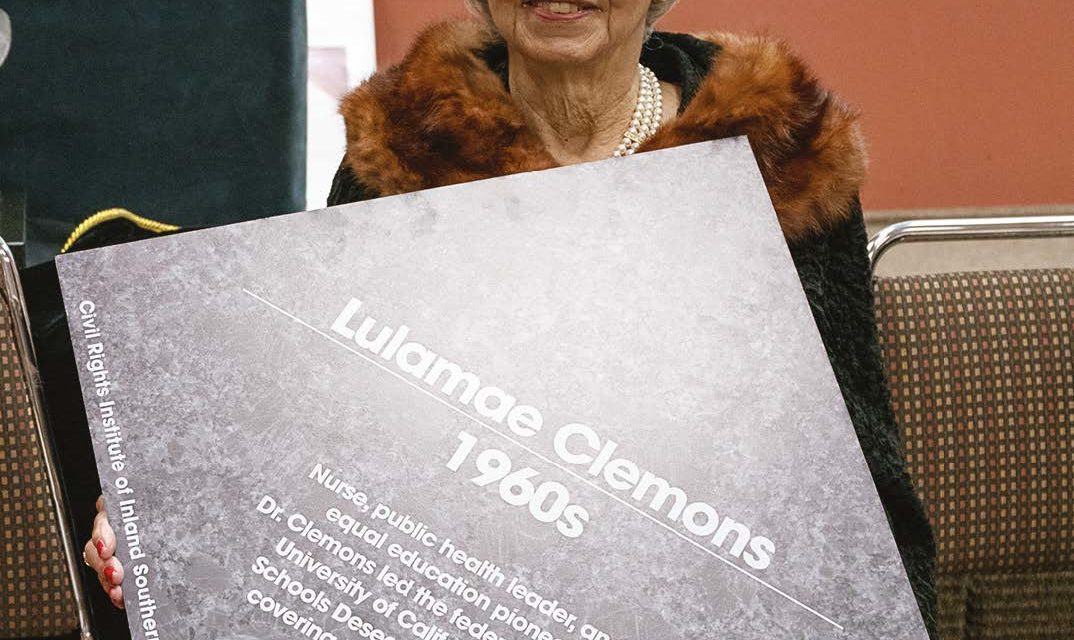 Over one hundred friends and community leaders gathered to celebrate the 100th birthday of Inland Southern California icon Dr. Lulamae Clemons. I revisited an article I published after I interviewed her four years ago…she’s a remarkable woman and just as fearless at 100 as she has been her entire life. We can all learn a few lessons from her. 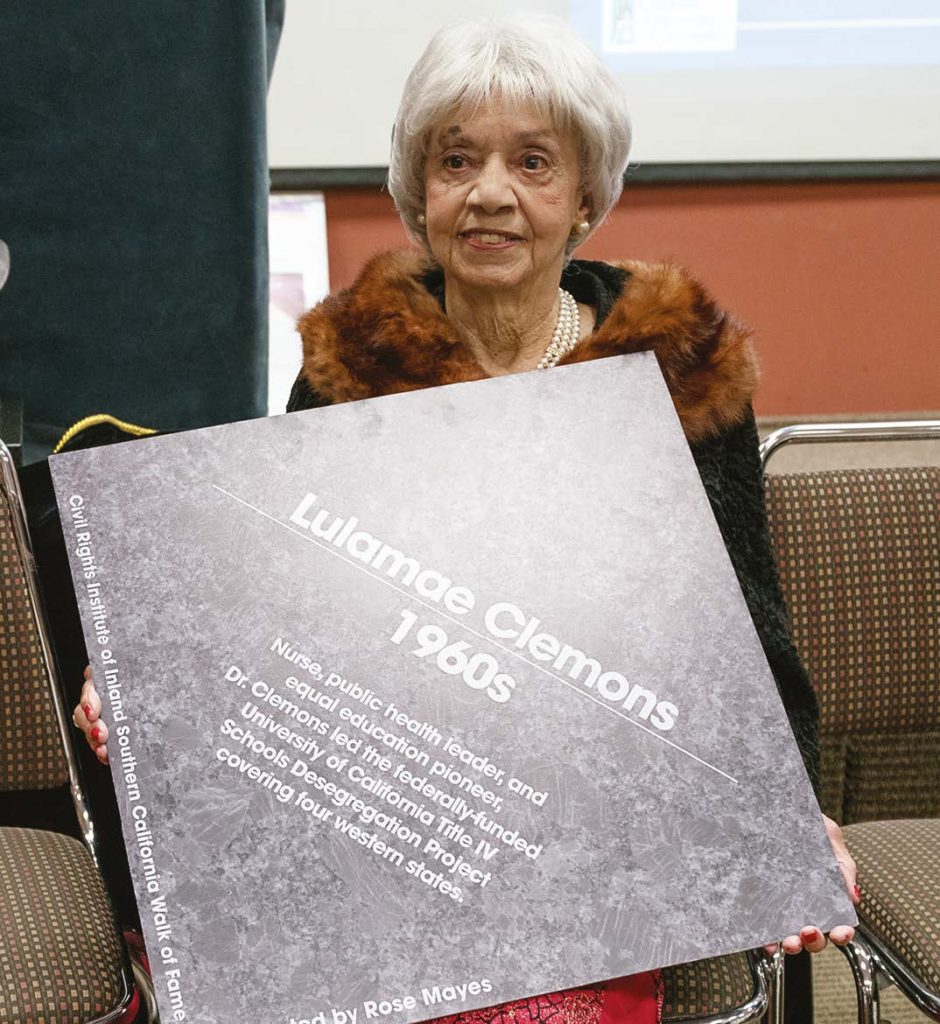 Dr. Clemons is presented with a commemorative tile that will be part of the Civil Rights Institute walkway

In 1917 America celebrated the second inauguration of Woodrow Wilson as president and despite his campaign slogan, “he kept us out of war” within a month of his second term he asked Congress to join the other world powers in battle.

That same year suffragists were arrested as they picketed the White House in an attempt to pressure President Wilson into signing an amendment giving women the right to vote. Jazz greats Ella Fitzgerald and Dizzy Gillespie and the man who would become the 35th president of the United States, John F. Kennedy were born; as well as the woman who would become one of Riverside’s most respected citizens, Dr. Lulamae Clemons.

Whether it’s studying nursing in her 20’s, earning a doctorate degree in her 50s, or learning how to work a smartphone in her 90’s, Lulamae values education, is fearless in her pursuit of knowledge, and has definitely never seen barriers to success and achievement that she didn’t believe she could overcome.

Born in Widener, Arkansas, a small town on the eastern border of the state whose population today is just over 300 residents, Lulamae admits that she still looks in the atlas just to see if the town is still there. Before Lulamae started grade school, her parents decided to move to Pueblo, Colorado on the advice of an Arkansas friend who suggested, “better economic and racial conditions existed for Negroes out West.”

In Pueblo, Lulamae attended a non-racially segregated elementary public school and non-racially segregated Centennial High School, which in 1982 inducted her into its Hall of Fame. The induction ceremony was attended by Lulamae’s extended family — brother Lawrence, sister Clara, son Frank, his wife Dorothy, and their four sons. It was one of many accolades that she is proud to have received.

“Being considered for the award was a great surprise,” she says. “There were 13 Black students at the school when I graduated and we all had very few opportunities to participate.” While the Black and White students were involved in separate activities, she says that she never really felt excluded or rejected. “That was their thing and this was our thing,” she explains. Her sense of pride in her heritage and confidence in her abilities carried her from school to school and state to state as she navigated her educational and professional life.

After graduating from junior college in Pueblo, she entered the School of Nursing in Kansas City, Missouri because the hospital nursing programs in Pueblo denied her admission based on her race, telling her that White patients may not accept nor tolerate being nursed by a Negro female.

“In Kansas City there were two hospitals. Number one was the White hospital on the hill and Number two was the Black hospital down the hill. It had an all-Black staff. Black doctors, Black nurses, Black grounds men,” she explains. While she had planned to attend the school with a good friend from Pueblo who waved goodbye at the station instead of boarding the train with her, she quickly made friends with some of the 22 dorm mates also in the nursing program. “There was a broad representation of young women in the program from all over the country and we all shared the same room. I had no choice but to make friends quickly.”

Once again, Lulamae was encouraged to continue her education, so she moved from Kansas City to New York where she attended Columbia University’s Teachers College and earned a Master of Arts in Public Health Administration.

Now divorced and the mother of a son in grade school, Lulamae spent a year earning that degree. It is clear that being fearful is not in her nature. “I would work every night and take the train home at 11 pm still wearing my nurses uniform. I’d walk three blocks every night to my apartment and was never bothered by anyone. I never thought to be afraid.”

While employed by the New York Association for the Blind, a friend from the National Urban League convinced her to accept an interview for an employment opportunity in Riverside. In 1956 Lulamae landed at the Riverside Municipal Airport and was met by Dr. Ken Weisbrod who escorted her to the Riverside County Office of Education.

Aside from all the encouragement Lulamae had received over the years, she emphasizes that Riverside County Superintendent Ray Johnson was the first White person to ever give her encouraging words after she was publicly ridiculed for being “a Negro” once she accepted the position as the Director of Intergroup Relations.

While employed at the county office, Lulamae earned a Doctorate Degree in Education Administration from the University of Southern California. “Everyone who worked for the county office was told they had to get a certificate in something.

I was told I had to get a certificate in Health & Development and was advised to enroll in USC,” she says. “I earned every certificate there was, and since I was piling up credits a friend counseled me to get a doctorate, so I did.”

“Thank God I was blessed to have a committee of three individuals who got along,” she says, “all agreed on my work and I never had to go back and keep revising it. I was truly blessed.”

She then took a position at the University of California, Riverside leading the government sponsored PRIME program that was designed to oversee and counsel districts in the Western United States on integrating their schools before settling into her final position as department administrator of education and training at Kaiser Permanente in Fontana.

She has been honored as Riverside Chamber of Commerce’s Citizen of the Year in 2002, received a Presidential Citation for Distinguished Service to Youth in 2003, named Woman of the Year by Black Voice News in 2005, and last year received the Lifetime Achievement Award from the Fair Housing Council of Riverside County. However she considers the erection of the Riverside Martin Luther King statue with the help of her friend Rose Mayes as one of her most notable personal achievements. That, along with, authoring the first multicultural textbook to be adopted by the State of California she considers her greatest gifts to the world.

Lulamae has traveled extensively visiting five continents and numerous countries, yet her most cherished journey was a month-long trip with her family to celebrate her retirement from Kaiser. The impetus to make the trip across the globe, “to see China’s Great Wall,” is ironic considering she is a woman who, for her entire life, has refused to see barriers or acknowledge obstacles. 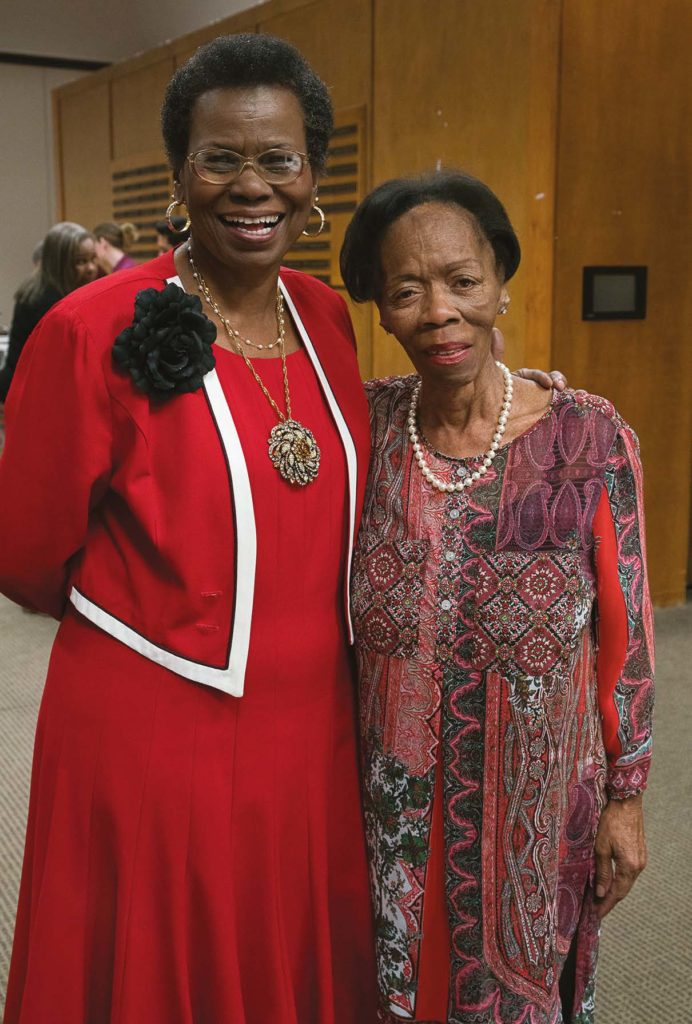 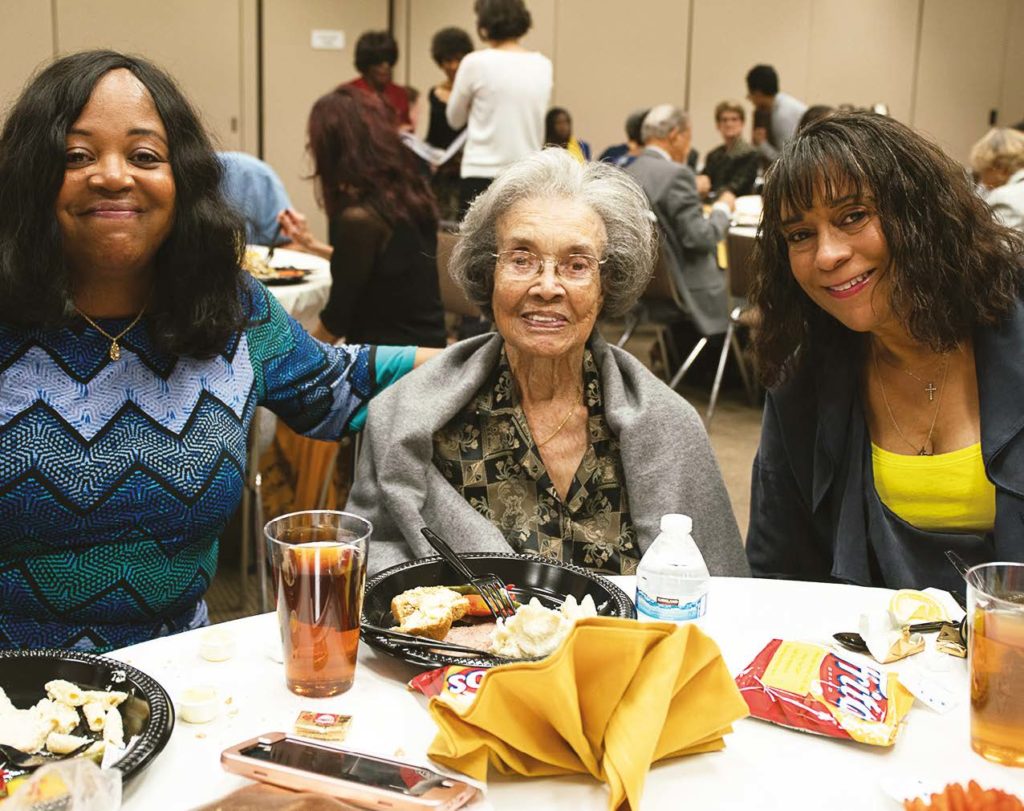 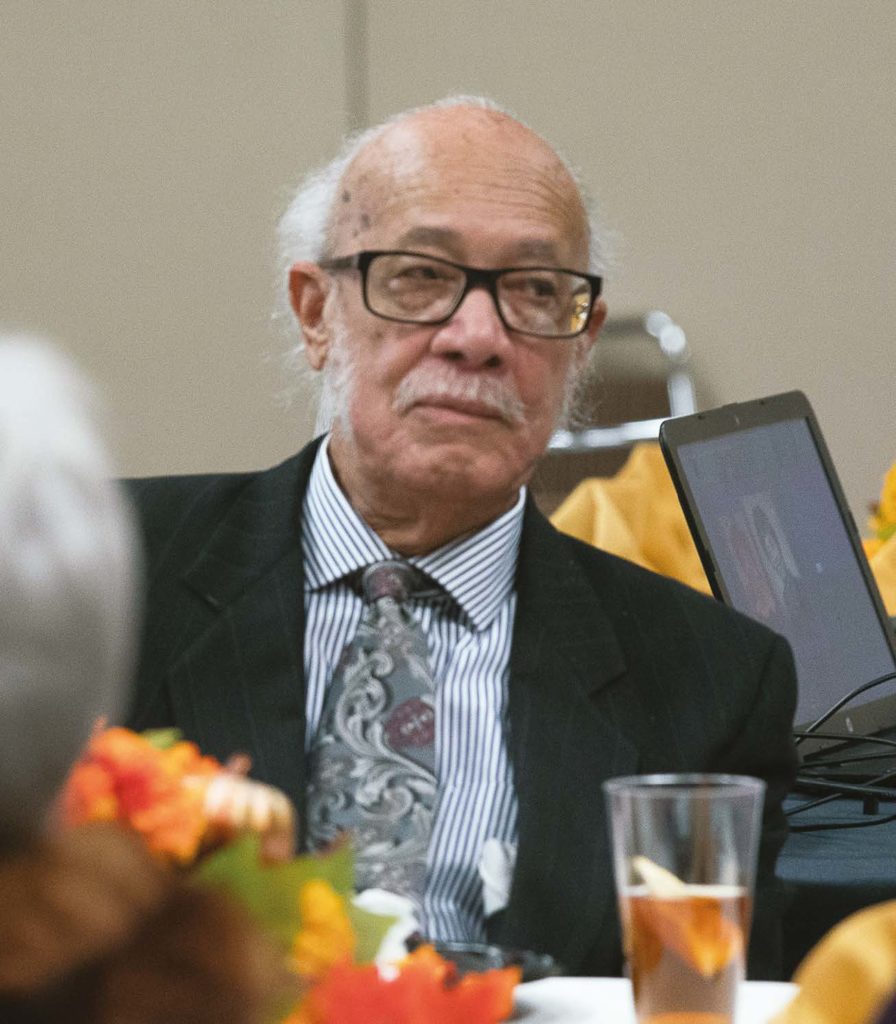 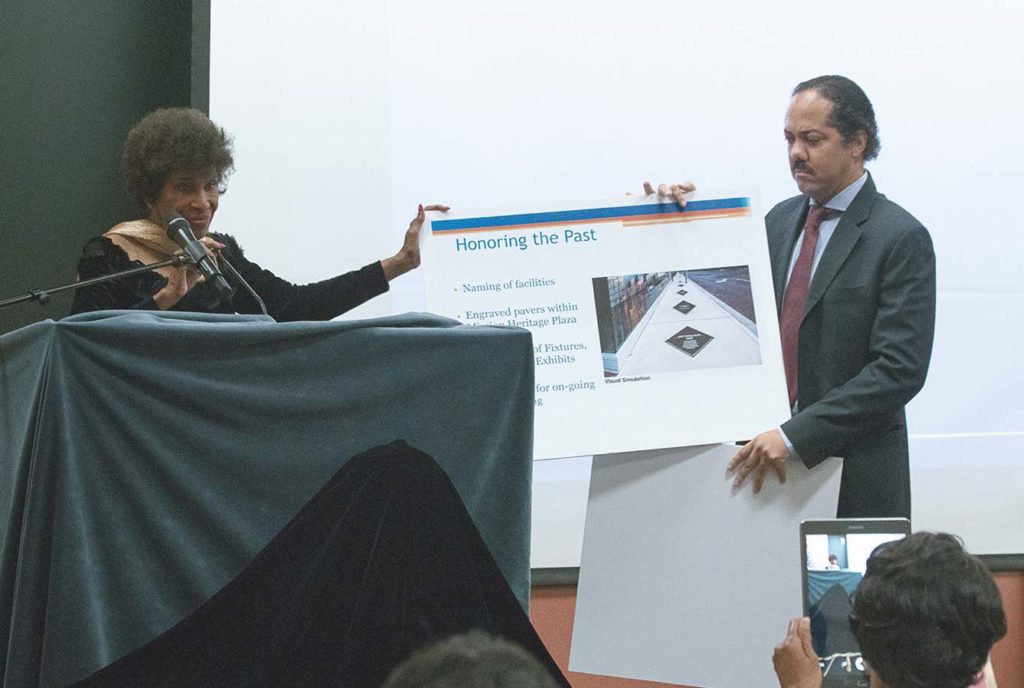 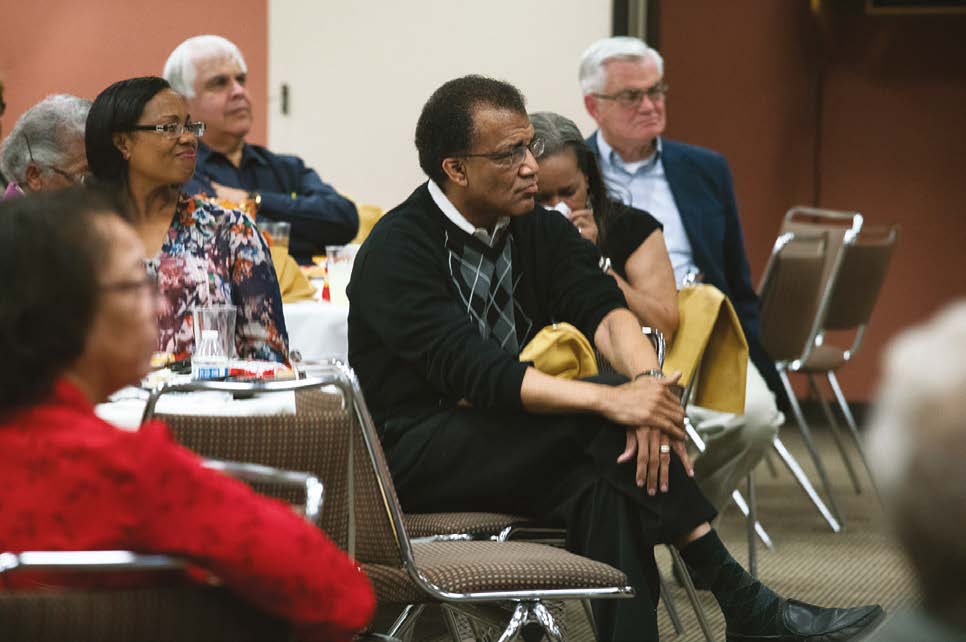 Judge Richard Field was among the notable guests in attendance 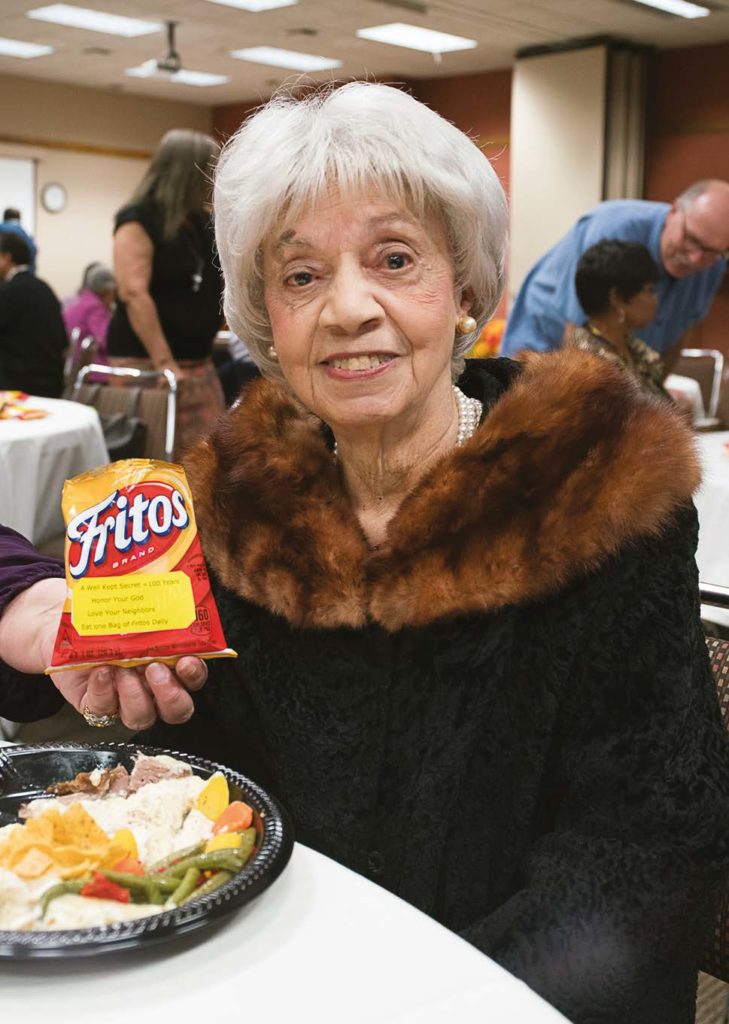 Dr. Clemons poses with her favorite snack – she eats one every day 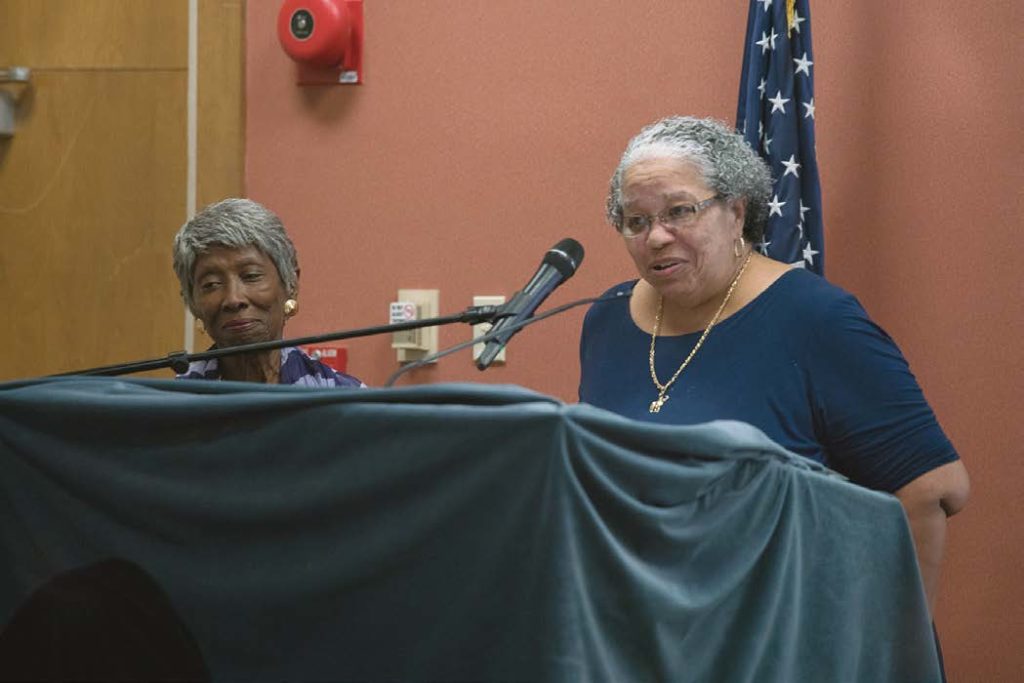