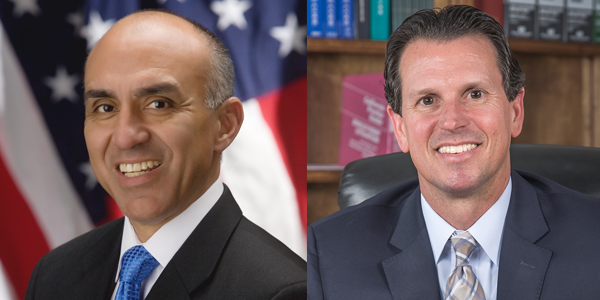 Ramos has countered Anderson as a “puppet” of the developer, Jeffrey Burum, who along with his co-defendants are “seeking $250 million from taxpayers” through lawsuits filed against the County of San Bernardino (county).

After an investigation in 2008, into wrongdoing at the San Bernardino County Assessor’s office involving former county supervisor and then assessor Bill Postmus, assistant assessor Jim Erwin, assistant assessor Adam Aleman and intergovernmental affairs officer Rex Guitterez resulted in criminal charges. In early 2010, Postmus and Erwin were arrested and charged with conspiracy to illegally influence approval of the $102 million settlement.

Postmus and Aleman accepted a plea bargain requiring them to cooperate in the investigation which included testifying in front of the grand jury as well as during the subsequent criminal trial.

After a grand jury was impaneled in 2011, new charges were filed regarding the $102 million settlement against Burum, Biane, Erwin and Kirk and by early 2017, two juries were impaneled to hear the criminal case.

On August 28, 2017, Burum, Biane and Kirk were found not guilty and a month later Erwin’s jury announced it was deadlocked with the district attorney’s office dropping the charges due to problems with witness testimony.

By early 2018, the unsuccessful prosecutions brought new lawsuits filed by the Colonies Partners, Burum, Erwin and Kirk against the County of San Bernardino for wrongful prosecution seeking a total of $250 million.

The Voice/Black Voice News reached out to both district attorney Michael Ramos and his opponent attorney Jason Anderson to obtain their views on the issues facing the criminal justice system in San Bernardino County.

In an interview with The Voice/Black Voice News, Anderson explained he worked at the DA’s office from 1998 until 2014, where he started to see a “decline in the office in terms of the way it was managed and it was becoming more about statistics and politics and less about the people” when he left to pursue opportunities best for himself and his family.

Anderson explained he decided to run for the district attorney’s office because he felt it could take a different direction after seeing the corruption case unravel as badly as it did.

Anderson shared how he considers former defendant Mark Kirk a friend and shared how he felt bad for him during the prosecution, was glad he was vindicated. He expressed his belief   Kirk was innocent. Anderson also revealed he has known Attorney Stephen Larson, who represented Burum in the prosecution, for a decade.

Anderson explained he was aware people in the business community were going to be involved in the election against Mike Ramos regardless of who was running to try and prevent the incumbent from getting re-elected.

“I wanted to run a campaign being an insider from the DA’s office—running in terms of what I thought the important issues were,” Anderson voiced explaining, “And if they decided to help me, then they were going to help me.”

On what he would change at the district attorney’s office, Anderson responded, “I would like for cases to be evaluated on the simple standard of whether they can be proved beyond a reasonable doubt, not (sic) to have numbers that can be used as statistics to promote a political platform.”

Currently more serious cases are taking a lot longer than they need to because there are not a lot of resources devoted to the bulk of the cases that fill up the system, he explained and described a death penalty case going on for 14 years as an example.

Anderson said he favors bail reform where the court considers other factors besides money bail to decide whether to release a defendant prior to trial and favors pre-filing diversion in certain nonviolent or possession of drugs crimes.

With regard to officer involved shootings, Anderson explained he wants to take away public skepticism, “The one thing I would propose on that would be to have the DA’s office have their own officer involved unit so it is independent of law enforcement.”

Regarding public corruption Anderson voiced, “I think the public integrity unit as it exists, would have to focus on making sure municipalities within the county continue to operate for the people they represent.”

“It’s a government agency, it needs to be above board and out in the public, the taxpayers are footing the bill and being most directly affected by the DA’s office because they are living in the community where prosecutions are occurring.”

“I hopefully have a very good track record of the last 21 years in the legal community, on both sides, as a prosecutor and even as a private attorney now,” Anderson said, “I feel very strongly in what I’m doing in terms of restoring integrity and fairness in the process.”

“I understand the most powerful law office in the county of San Bernardino is also the largest—the San Bernardino County District Attorney and it needs to have a steady, non-political hand to administer what the mission of that office is in the correct way and that is why I am running,” Anderson concluded.

In an interview with The Voice/Black Voice News, Ramos explained he could not talk about the Colonies case because it’s still a “legal issue.”

“I can just tell you and I have said before it was never anything political and everything to do with evidence,” Ramos said. He further explained how the case went before a grand jury, the State Attorney General was a partner in the prosecution and the Federal Bureau of Investigation assisted in the investigation.

According to Ramos it was a very tough decision to prosecute and he truly believes to this day, “We did the right thing. I think we changed the political climate of corruption in San Bernardino County. No longer do you have this big cloud of corruption over the county. “

Ramos continued, “These folks were contributors of mine, (sic) it doesn’t make sense that it was for politics for me to go after people that were supporting me.”

“But I also made a commitment to the public even if you support me, I can’t turn my head to things that were occurring,” Ramos said accepting full responsibility for it even though he didn’t do the investigation or legal analysis.  “They want more millions from us and I think it’s wrong and I have full confidence we are going to be successful.”

Ramos opined his opponent is being funded by “them” and alleged Jason Anderson didn’t decide to run for DA until the jury verdicts were announced.

“Jason is their puppet, I will say that and I have said it publicly,” Ramos said and revealed, “That’s why I am running again, because I can’t let those individuals buy justice, buy the DA’s office. They are raising close to a million dollars and mailing out hit pieces.

As to issues facing the criminal justice system, Ramos claimed rehabilitation is really important because that means less crime and less victims. The DA’s office is involved with the San Bernardino County Re-entry Collaborative Group Initiative.

Three weeks ago, Ramos created a prevention and intervention unit to help not only prevent crime on the front-end but on the back-end intervention can help get these people back into the community.

Ramos touted a program where the district attorney’s office visits elementary schools emphasizing education, saying no to drugs and sharing how to stay away from gangs while involving parents. He claimed, “We have touched thousands.”

“We hold gang members responsible for serious and violent crimes,” he noted. Ramos also believes if a gang member has turned his life around, he supports a sunset on gang affiliation.

“I think that will take some legislation because they are going to have to come up with criteria to remove them from the California Database,” he added.

About bail reform, Ramos said, “We need to keep the dangerous people in custody until their court hearings (sic), however, I think we need to fix the system because there is a two-tier system based on the ability to pay.

“I am proud to say we are at the table with the court where we can put special courts together—drug courts, homeless courts, mental health courts, Veterans courts; we totally support those convicted of misdemeanors that really need a chance.”

Ramos touted a pre-trial diversion program called RISE where he claims to have helped 1,451 defendants in two and a half years where less than one percent reoffended.

With regard to juvenile defendants, Ramos said, “I am telling you the juvenile process is key; it’s all about diversion and prevention and locking kids up is not the answer.”

Ramos pointed to reductions in arrests for driving under the influence, in serious and violent felonies because of the good job they are doing, while also admitting to a slight increase in drug crimes, which they are working on.