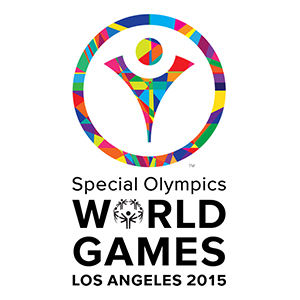 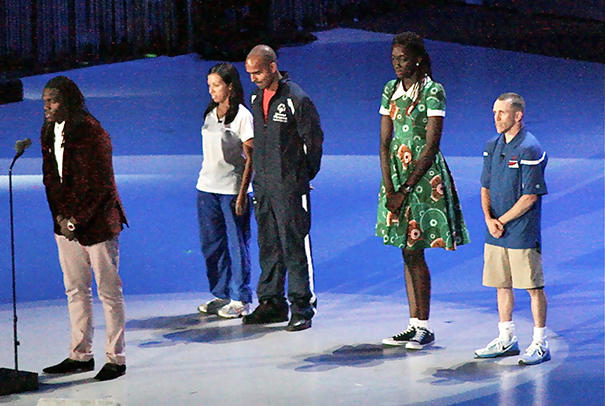 Jamal Charles, star running back for the Kansas City Chiefs tells his story during opening ceremonies of the Special Olympics on Saturday at the LA Coliseum.

Saturday’s opening ceremonies to begin LA2015 Special Olympics was simply incredible. The historic Los Angeles Coliseum, host of the 1932 and 1984 Summer Olympic games could not have been a more perfect venue.

A sold out crowd of 62,388 fans from around the world gathered to cheer, applaud, high five, and hug Special Olympic athletes arriving from every corner of the globe. It’s a celebration like no other in the world. 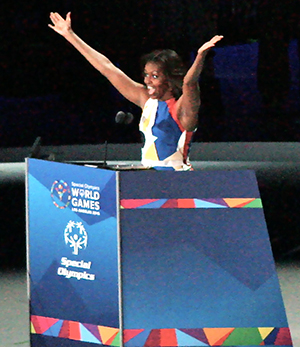 First Lady of the United States Michelle Obama
holds up the Special Olympics symbol as she
officially opens the games.

I had the good fortune to attend the 1984 LA games as a fan and later cover three other Summer Olympics as a media member. I have never experienced the depth of emotion and joy I felt watching the 6,500 Special Olympians from 170 countries file onto the hallowed turf of the Coliseum.

President Obama welcomed the athletes via video from Kenya. He thanked the Special Olympians for being an example of what America’s founding principles are: life, liberty and the pursuit of happiness. Also congratulating them for spreading those principles all over the world through their athletic endeavors.

Los Angeles Mayor, Eric Garcetti graciously welcomed the athletes to his beautiful city and gave way to Tim Shriver, Chairman of the Special Olympics. Tim urged the athletes to seize the moment and find their bravery and embrace what the world has to offer through their athletic involvement.

Next up Shriver introduced his sister former California First Lady, Maria Shriver who told the story of her mother’s vision. “How lucky I am to be introduced by my brother. Because family was everything to my mother. And the five of us Bobby, Timmy, Mark and Anthony, we always knew the Special Olympics was always our mother’s 6th child and maybe her favorite one at that.”

Eunice Kennedy Shriver gave birth to the Special Olympics movement nearly 50 years ago with a small gathering in her backyard. It became her passion. She nurtured it and grew it into the global force that it is today.

I was particularly moved by Jamal Charles’ story. Now a star running back for the NFL’s Kansas City Chiefs, Charles described his childhood struggles with a learning disability. Being afraid because of his intellectual deficiencies and getting an opportunity to participate in the Special Olympics then finding talent he didn’t know he had. Today, Charles has been an academic and athletic standout at the University of Texas, played 8 seasons with the Chiefs, been selected to four Pro Bowls and earned numerous other athletic awards. 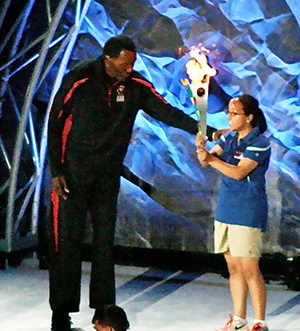 Even more inspiring was the story of Tim Harris, an active Special Olympic athlete and Restaurant owner. Tim dreamed of owning a restaurant since he was 14 years old. He now owns Tim’s Place in Albuquerque, NM. “At my restaurant, we serve more than food. We serve breakfast, lunch and hugs. Since 2010, we have given out 72,000 hugs! Because who doesn’t need a hug”? Tim then introduced the First Lady of the United States Michelle Obama.

Obama stressed the unifying quality of the games. How Special Olympians come together and help each other overcome their individual challenges. She explained how their struggles should serve as an example to everyone how powerful unity can be. “I want you to know that all of the people won’t just be cheering for you, they will be learning from you. They will be inspired by you. And they will be reminded that at our core, we all want the same things. A sense of pride in who we are. And a belief that we can reach our dreams no matter what challenges we face”.

And then came those magical words: “Let the games begin”.

Over the next nine days nearly 7000 Special Olympians from 170 countries will compete in 29 sports at venues throughout southern California. It is an incredible experience to watch these Special Olympias give their all in the spirit of competition. It changes hearts!