Let This Be the Beginning

I count myself among the millions who are fed up with this nation’s inability to come to grips with the insane level of gun violence that steals lives, injures bodies and breaks hearts.

As the body count has risen over the years, somewhere along the way I lost my tolerance for those who cling to the Second Amendment above reason or the unnecessary loss of life.

This issue is further complicated by the control gun lobbyists with their fists full of dollars, have on our elected officials—particularly members of the Republican Party, although many Democrats are not exempt from peddling the political influence gun lobbyists’ money can buy.

Almost lost among the many news events at the local, state and federal levels last week, was an historic ruling by the Connecticut Supreme Court related to the issue of gun manufacturers. The case involved the gun manufacturer Remington, who was sued over how it marketed the rifle used in the 2012 Sandy Hook Elementary School shooting that left 20 young children and six adults dead.

In its decision, by a slim three to four margin the court reinstated the wrongful death lawsuit thereby overturning a lower court ruling that had thrown the case out. The lower court judge had ruled the lawsuit was prohibited by a 2005 Bush era law, the Protection of Lawful Commerce in Arms Act (its title would almost be laughable if the reality of the law wasn’t so despicable) made it nearly impossible to sue gun manufacturers. As a result, lawsuits in several states against gun manufacturers like Remington are continuously dismissed by the nation’s courts.

To bypass the limits of the Bush era law, the plaintiffs in this case carved out and argued a narrow path related to how Remington had advertised the AR-15 rifle used in the Newton massacre (and many others), with a focus on young people—including those with mental illness. It is very possible this ruling will help change the discourse regarding common sense gun legislation. 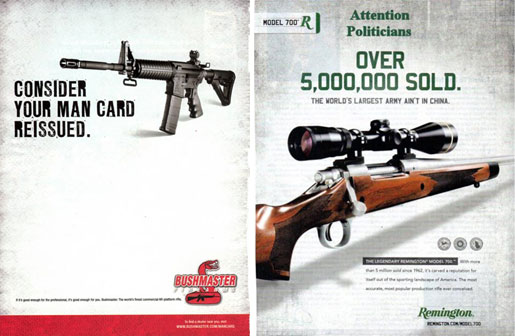 Now that the lawsuit can proceed, the plaintiffs are entitled to the disclosure of Remington’s corporate documents related to its marketing strategy. Gun manufacturers and Second Amendment advocates are apoplectic over what such disclosure may reveal.

The disclosures in this case may well put the gun industry in the same kind of untenable position as the tobacco industry found itself in when it became awash in the “antiseptic of sunshine.” A look at some of Remington’s advertising tells a clear story about who the company targeted for its products.

For years, surviving family members and injured victims of gun violence have had little recourse against the gun industry—at long last, maybe the tables are about to turn. If gun manufacturers are eventually held to the same level of accountability as the tobacco industry, I for one, will celebrate.

If this comes to pass, I will be the first to advocate that society should not stop with those who build and market such weapons. Let this be the beginning of a new era of corporate/industrial accountability. Afterall, as Mitt Romney once told us, “Corporations are people, my friend.” If that’s so, then they should not have privileges the average citizen does not enjoy—like being exempt from civil lawsuits. Also, just like the gun manufacturers, there are other industries that must be “exposed to the light.”

I say, what about the coal industry and its impact on the environment and public health, or Big Pharma and the opioids it pushed to unsuspecting consumers, or food manufacturers and the health concerns of GMO and pesticides, or the oil companies not only for their impact in regards to environmental issues and public health but also about how in some instances, fracking has polluted precious underground aquifers, and the list goes on.

Although Remington is certain to fight this decision by pursuing it to the US Supreme Court, it is very possible this may be the beginning of a new front in the fight to hold the gun industry accountable for the madness it has unleashed.
Of course, this is just my opinion. I’m keeping it real.