Know Your Rights: Members of the LGBTQ+ Community 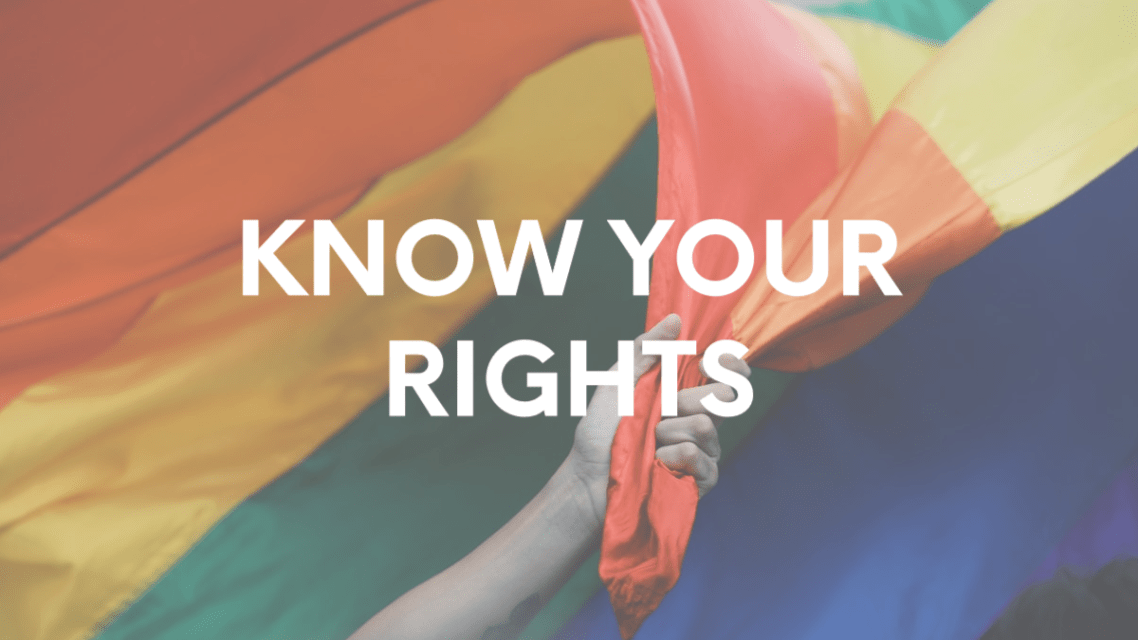 The American Civil Liberties Union describes the legal landscape for members of the LGBTQ+ community as constantly evolving. California is seen as one of the most liberal states in the U.S. regarding lesbian, gay, bisexual, transgender (LGBTQ+) rights.

California became the first state in the U.S. to legalize domestic partnerships between same-sex couples in 1999. Transgender people are also permitted to change their legal gender on official documents without any medical interventions, and mental health providers are prohibited from engaging in conversion therapy on minors.

Employers with 15 or more employees are prohibited by Title VII of the 1964 Civil Rights Act from discriminating based on sex. Some courts have ruled that Title VII also bans discrimination based on sexual orientation or gender identity. The Supreme Court recently announced it will take up this question in three cases. In addition, many states and cities have laws that ban this kind of discrimination.

The federal Fair Housing Act prohibits sex discrimination by most landlords. The ACLU believes this should also be interpreted by the courts to protect LGBTQ+ people. Unlike some states, California law protects members of the LGBTQ+ community from housing discrimination.

Housing discrimination against people with HIV/AIDS, or people perceived to have HIV/AIDS, is also illegal under the Fair Housing Act’s protections against disability discrimination.

Housing providers that receive funding from the Department of Housing and Urban Development (HUD) or have loans insured by the Federal Housing Administration (FHA), as well as lenders insured by FHA, are subject to HUD’s Equal Access Rule, which bans discrimination in HUD programs on the basis of sexual orientation or gender identity.

There is no federal law that bans discrimination based on sexual orientation or gender identity in public accommodations, like restaurants, theaters, and other businesses. However, in 1979, the California Supreme Court held in Gay Law Students Assn. V. Pacific Tel. & Tel. that public institutions cannot discriminate against homosexuals under Article I, section 7 subdivision (a) of the California Constitution which bars a public utility from engaging in arbitrary employment discrimination.

Title IX of the Education Amendments of 1972 bans discrimination on the basis of sex by public schools, and several federal courts have ruled that Title IX protects LGBTQ+ students from discrimination or harassment.

Federal courts have held that Title IX requires public schools to respond to harassment based on appearance or behavior that does not conform to gender stereotypes: boys who wear makeup, girls who wear pants, or students who are transgender or non-binary. The First Amendment right to free expression can also apply to school dress codes.

Your constitutional right to privacy makes it illegal for your school to “out” you to anyone without your permission, even if you’re out to other people at school.

The First Amendment protects your right to express yourself in public schools. That includes bringing a same-sex date to prom or any school event.

A transgender employee in California has the right under the Fair Employment and Housing Act (FEHA) to use a restroom or locker room that corresponds to their gender identity or expression regardless of the employee’s assigned sex at birth. The regulations specifically state that employees cannot be “required to undergo, or provide proof of, any medical treatment or procedure, or provide any identity document, to use facilities designated for use by a particular gender.”

Other protections for transgender people in California

Seeking gender- or sex-related information from applicants and employees is prohibited. This includes seeking proof of an individual’s sex, gender, or gender identity or expression (except in extremely limited circumstances or on a voluntary basis).

Employers must honor an employee’s request to be identified by a preferred gender, name, or pronoun, including gender-neutral pronouns.

If you experienced discrimination notify the California Department of Fair Employment and Housing at www.dfeh.ca.gov or call 800-884-1684.