It was a remarkably shameful act, not surprising, but shameful nonetheless.

To imagine 126 Republicans from the U.S. House of Representatives joining an amicus brief in support of a Texas lawsuit in the Supreme Court to overturn the results of the presidential election by ignoring the will of the people was disturbing.

What added insult to injury was the suit’s obvious effort to disenfranchise Black voters in the swing states of Pennsylvania, Michigan, Wisconsin and Georgia.

It left a shameful mark on the face of democracy, for those in the inland region, the state of California and the country. Their act was another wake-up call to the realization that America’s democracy is in danger.

Counted among those who sought to undermine the federal government was Riverside’s own Ken Calvert who has held office since 1993 and represented the county’s 42nd Congressional District since 2013. Calvert was not alone among California Republicans who sought to betray the country. He was joined by three other California representatives including: Doug LaMalfa, Congressional District 1; Kevin McCarthy, District 23; and Tom McClintock, District 4.

In the brief they asserted as members of congress, “[I]t presented the concerns shared by untold millions of their constituents, that the unconstitutional irregularities involved in the 2020 presidential election cast doubt upon its outcome and the integrity of the American system of elections. [T]he broad scope and impact of the various irregularities in the “Defendant” states necessitate careful and timely review by this court.”

The Supreme Court dismissed the frivolous case out of hand.

What do we make of these constitutional charlatans who so frequently wrap themselves in the statute as if it were a coat of armor, cling to it as if it were a shield against pigmentation, all the while violating it  with wanton disregard when they cannot twist it to their purpose?

This is not Belarus. This is not Zaire. This is not any other country where dictators work their will against the wishes of the majority, aided and abetted in their corruption by subservient sycophants.

Are these people so deeply rooted in their racism, so tied to their beliefs of White Supremacy they would rather destroy a nation than live up to the unfulfilled promise of this fledgling democracy? Or are they just acting out what has always been apparent to Blacks and other people of color in this nation—that when the constitution was written with all its brilliant flourishes they know, like we know—the founders of this country never envisioned a nation of color. Is that what they really mean when they say they are “originalists?”

At this point it might be interesting to note the original seal of the United States proposed by Thomas Jefferson, Benjamin Franklin and John Adams included an image of Moses leading the Israelites out of their bondage in Egypt to the “Promised Land of freedom and liberty.” And if that were not ironic enough for a slave-holding nation, consider the proposal for the obverse side—the likenesses of Hengist and Horsa, the two brothers who supposedly led the first Anglo-Saxon settlers in Britain. The obverse side included the quote: “Rebellion to Tyrants is obedience to God.”

After fervent discussion the proposal was rejected. According to historian and author Edward J. Blum, in part because, although it inspired resistance to England, there were concerns it could put ideas into the heads of slaves that Jefferson did not want and also raised issues of what freedom meant both religiously and racially. They apparently believed freedom was from God (Exodus) but also from Anglo-Saxons (Hengist and Horsa).

The design recommended to Congress by the authors of the constitution on Aug. 20, 1776 included a shield with symbols of countries from which the US was populated—England, Scotland, Germany, Holland, France and Ireland, with the motto, “E Pluribus Unum.”

Although the original seal was never adopted, elements were carried over to the final design, including a revised shield, the motto “E pluribus unum,” the Eye of Providence in a radiant Triangle, and the date MDCCLXXVI (1776). 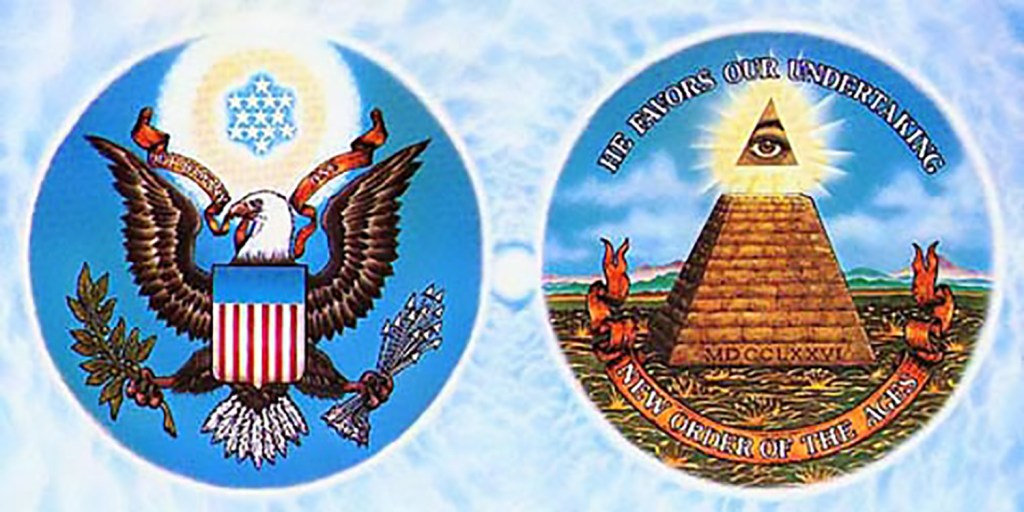 The U.S. Seal as it is today courtesy of usa.usembassy.de

Sometimes it is painful to admit the truth about this nation’s origins, what prejudice ideology carried forward to today and the truth behind what may be motivating the racists ideologs who place White Supremacy over the ideals rooted in the Constitution.

Yes, the Constitution was never intended to include many of us who are here, but we are here. And despite the flaws in character of those who drafted the document the truths they scribed were universal, unequivocal, immutable, undisputable and incontrovertible regardless of whether the founders intended to include all of us.

Any effort to prove otherwise, like the actions of Calvert and his 125 cowardly cronies will not change this.

The question is what should be the consequences for their heresy; for what has been described as their blatant and dangerous act of sedition?

We can sit silently and acquiesce to the beliefs of some who say “Oh, they’re good people, they are just caught in a tough political situation,” or we can call it out for what it is.

I don’t subscribe to that marble-mouthed explanation. I see them as dangerous cowards who will say anything, do anything regardless of what rules it violates or how many people they hurt, to preserve the ideology of White supremacy that, as far as I’m concerned, must die for America to live.

A call to  action—Contact Speaker of the House Nancy Pelosi and demand Congressional action against the “Disgraceful 126” via email or telephone at (202) 225-4965.