It is Health That is Real Wealth… 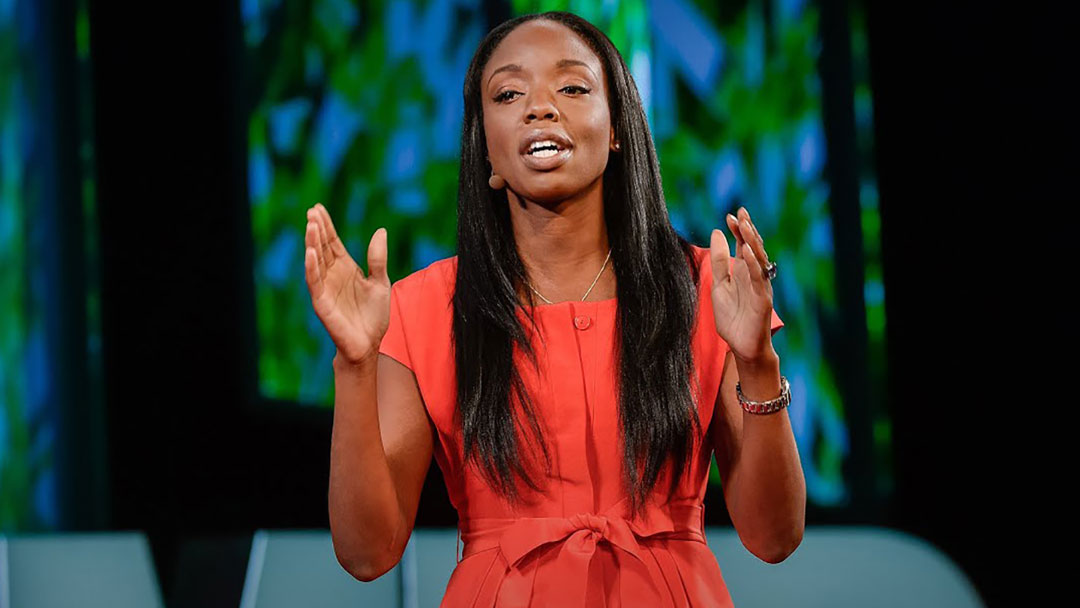 Surgeon General Nadine Burke Harris Listened and Engaged on Issues of Health During Visit to I.E.

California Surgeon General Dr. Nadine Burke Harris visited the Inland Empire recently as part of a listening tour she initiated around the state to engage constituents on issues of importance to their local communities.

Many would describe Burke Harris a forerunner—she is a leading authority on childhood trauma and the impact adverse childhood experiences and toxic stress has on childhood health and development.

She is founder and CEO of the Center for Youth Wellness (CYW) in San Francisco and identified as a national leader in the effort to advance pediatric medicine, raise public awareness and transform the way society responds to children exposed to adversity.

At the time of her appointment to the position of California Surgeon General in late January, she led the Bay Area Research Consortium on Toxic Stress and Health—a partnership between CYW and the University California San Francisco’s Benioff Children’s Hospital—to advance scientific screening and treatment of toxic stress; and served as a member of the American Academy of Pediatrics’ National Advisory Board for Screening. She also served on a committee for the National Academy of Medicine, in addition to serving as an advisor to other committees and commissions.

With such background and wealth of experience Burke Harris was a coveted choice to serve as the state’s first ever Surgeon General. She is now tasked with leading the state in addressing what has become an overwhelming consensus among members of the scientific community around the early warning signs and childhood determinants of serious health outcomes.

In her role she will work to urge policy makers at every level of government and leaders across the state to consider the social determinants of health—especially for children. These efforts will include a focus on combating the root causes of serious health conditions including adverse childhood experiences and toxic stress. Part of her effort includes using her platform as Surgeon General to reach young families around the state.

During a recent stop in the inland region as part of her listening tour experience, Burke Harris spoke with The IE Voice/Black Voice News and described her approach to the opportunities she has embraced as Surgeon General to positively impact public health in California.

“ I think coming into the role, it’s been very important to me to come out and spend time in conversation with community and to take what I’m hearing from our communities—from providers, from health practitioners, from educators, from folks in law enforcement, from those in our faith based institutions, from parents and caregivers—and both bring that back to the governor’s office and the Department of Health and Human Service.” 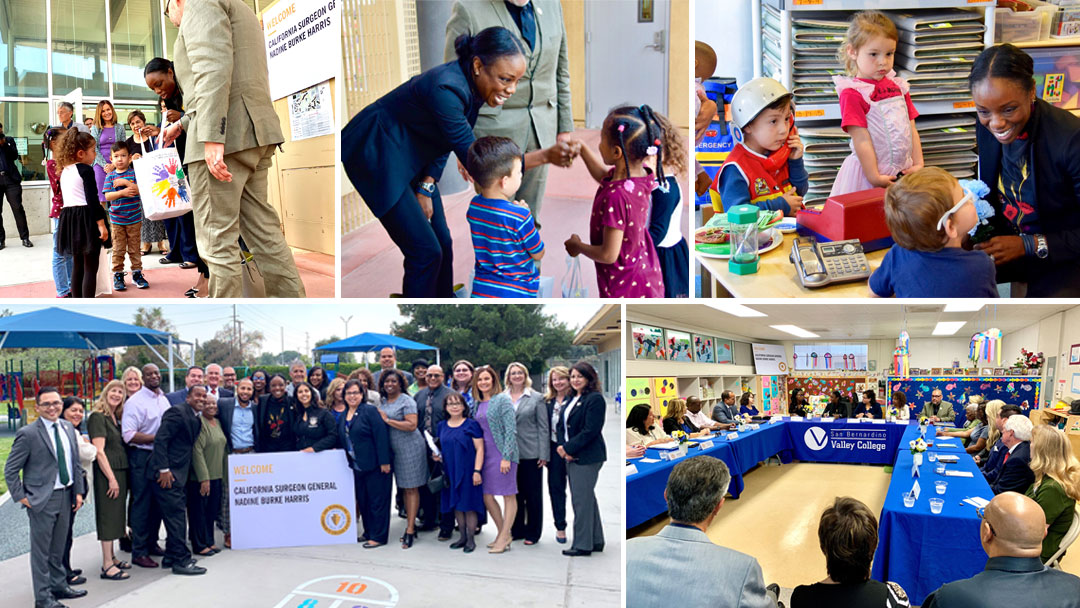 She also stressed how these interactions are helping to inform her new position. “Some of the questions for me coming into this role are how can we lift up and support the excellent work that is happening in communities.” She explained how this is particularly true as it relates to breaking through some of the obstacles and potentially some of the silos or barriers to cooperation. “It was just really important for me to start with listening and then go from there,” she shared describing the impetus for her current effort.

Considering her interactions on the tours so far, Burke Harris has found some health-related concerns are universal in communities around the state while others are more specific to certain areas. For example, “One thing that is coming up everywhere is a lot of folks are feeling like there is fragmentation in our systems of care.”

She explained, “One of the biggest things I’m hearing is the need for mental health services. Another big thing that I’m hearing is the importance of moving from a ‘reactive frame’ to a ‘prevent frame’ and trying to do more on the front of prevention.”

Some of the things she is hearing that are more specific to communities include, “In the Central Valley and the Inland Empire I’ve heard a lot about provider shortages. For many of us, we would think for California we are a very resource rich state; but at the same time, many parts of our state are facing shortages in providers—not just regarding health care providers but also educational providers, all kinds of providers. This is certainly something I’m hearing,”

Burke Harris also expounded upon some of the networking opportunities that frequently happen spontaneously during her sessions. “That is one of the wonderful things about the listening tour,” she explained.

“One of the fun things about being California’s first surgeon general is that as I come out to various locations for the listening tour, like in the Riverside and San Bernardino area, when people come to meet with me they [also] get to hear each other and as we talk about some of the challenges that communities face—one person will raise a challenge and then another person in the room will say, ‘Hey, we have a great program that is addressing that. We should talk after this meeting.’”

Among the many challenges impacting local communities one concern specific to the Black community everywhere is the rising rate of teen suicides among Black youth—particularly young Black males. “[T]here are certainly quite a number of things as we are looking at in communities that we can be thinking about,” she began. “One thing I have talked about and do a lot of listening on is how we can do prevention, early detection and early intervention of risk factors for suicide.”

“Early identification of risk factors and support is really, critically important,” she stressed. “I think it really takes an entire community, especially regarding teens and young adults.” She highlighted how important it is not only for parents, but also peers to be able to recognize the warning signs.

“Raising awareness about resources, she continued, “is also critical to insure there is no ‘wrong door’ for a young person who is struggling, whether it is at their school or other educational environments.

“One other thing,” Burke Harris added, “We were talking at the meeting in San Bernardino about also making sure the work that we do is culturally informed, that we have cultural humility and expertise in the work that we are doing and [understand] how different communities may look at accessing mental health care for example—with a different lens.” Noting, sometimes different communities have greater barriers.

This approach must also be considered as the state, municipalities and others work to address concerns related to service provider shortages. She noted it is essential that service provides also be culturally and linguistically aligned with the background of the diverse population here in California.

Another health worry impacting people of all ages in the inland region, especially students in certain areas, is childhood asthma. Some are wondering how the region’s growth and expansion of the warehouse house industry may be contributing to high asthma rates and other respiratory diagnoses as well as the correlation between increased truck traffic through the region and these health conditions.

Acknowledging first, that as a researcher and clinician she likes to be very precise and not having had an opportunity to assess the data for this region, she responded in general. “Certainly, there is an association between particulate exhaust, and I believe there is a greater association with diesel exhaust that we see with respiratory compromise and increase risks of asthma.

Though Burke Harris was not sure about the volume of exhaust happening in the inland region and whether that’s changed over time, she continued, but certainly we do know, for example, the closer the proximity to a large highway the greater the risk we see.”

According to the Centers for Disease Control and Prevention, ACEs (Adverse Childhood Experiences) have a tremendous impact on children’s lives in several areas, one of which is lifelong health.

According to the Surgeon General, this is because although particulates in the lungs can lead to inflammation, exposure to adversity leads to greater inflammation at the same level of particulate exposure.

“This is where we see the convergence of some of these factors. If you live next to a freeway and you have significant adversity, your risk is compounded,” she confirmed. “The interesting aspect is that we recognize some of these warehouses are more likely to come into communities where land is cheaper [and] where there are fewer resources; so again, it is just a compounding.”

“You may have economic adversity happening in a community. On top of that, you have greater environmental risks. And, on top of that—if a child is exposed to adversity and maybe doesn’t have the community resources, you can see how those factors would compound.”

“The good news,” she offered, “is a big part of my role [as surgeon general] is to inform, to raise awareness, and hopefully inspire folks to action.”

Burke Harris is optimistic that by getting the message out to the public, “What’s going to happen is maybe some pediatricians and some pulmonologists or some researchers somewhere will say, ‘Wow, I didn’t know that there was this association between adversity and the pulmonary response to particulates. I’m going to be part of the work that is happening here to change outcomes and change risk factors for the folks in our community.’”

Burke Harris’ listening tour to identify and elevate issues of importance to communities in the arena of public health in California may well be the first step in laying a foundation for change.