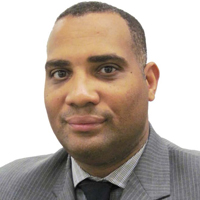 Erik Johnson, 42, former executive director of the Livable City Initiative in New Haven, Conn., will serve as Vice President of Development at CORE, one of the nation’s largest nonprofit developers of affordable housing. He will focus primarily on Waterman Gardens, a transformational project in the heart of San Bernardino.

“We’re fortunate to get a person of Erik’s experience and credentials to help lead our Waterman Gardens project,” said Steve PonTell, President and Chief Executive Officer at Rancho Cucamonga-based CORE. “The work he did in New Haven is a standard for community and neighborhood redevelopment, and exemplifies the opportunity that exists in San Bernardino.”

Waterman Gardens is a 70-year-old public housing project that will be transformed into a state-of-the-art community of affordable, senior and market-rate housing. Construction is expected to begin in early 2015 on the first phase of the project, a 76-unit multifamily project at 9th Street and Valencia Avenue.

Studies by the Center for Economic Research and Forecasting at California Lutheran University show the Waterman Gardens redevelopment will be catalytic to the community at large, creating more than 1,000 jobs – directly and indirectly – during construction and generating $81 million in direct economic impact to the county.

Johnson, who arrived in his new role on Nov. 17, said San Bernardino’s location in the heart of the region’s growing logistics industry creates abundant economic opportunities for residents and the community at large.

At the Livable City Initiative, Johnson led a team of 46, oversaw an investment pipeline of 1,000 new units in $500 million in potential development activities, grew the city’s investment in workforce and affordable housing, and managed a heightened code enforcement operation that significantly reduced the number of blighted properties.

Before joining the City of New Haven in 2010, Johnson spent five years in Washington, D.C., as project manager for the real estate development firm William C. Smith & Co and as a project manager and special assistant for the city’s Home Again economic development initiative. He also has worked for the Reinvestment Fund in Philadelphia and the Development Credit Fund Inc. in Baltimore.