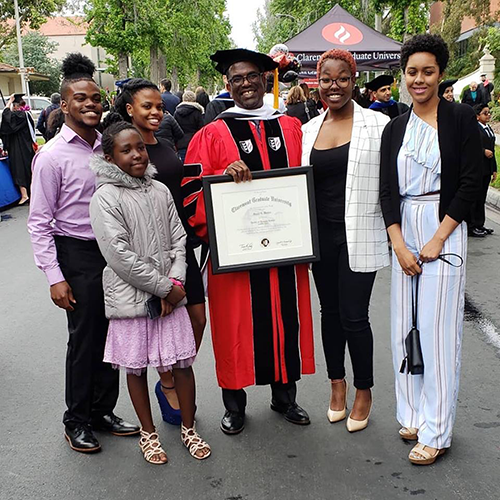 Walker was recognized alongside innovators Kim Stringfellow and Zubaida Bai, as part of the university’s 91st commencement ceremony. According to CGU’s Interim President, Jacob Adams, the faculty and trustees selected Walker because his “perspectives and contributions have profoundly shaped and benefitted our world.”  Walker was also selected and delivered the commencement address to nearly 3000 attendees.

A proud son of the City of Fontana who began his educational career through the Head Start program, Walker was elected Senior Class President of Fontana High School’s Class of 1985. He is celebrated as an arts innovator and public speaker whose works span the fields of history, film, television, digital archives, education, theater, and social justice advocacy.

Walker’s contributions are prolific. He is the author of the acclaimed book No More, No More: Slavery and Cultural Resistance in Havana and New Orleans, writer/director of the films When Roosters Crow, The Ten, Sol Brothers, and Let’s Have Church, a producer on KCET’s Emmy Award-winning series Artbound, and founder/director of the Long Beach Indie International Film Festival, a global showcase for diverse stories and storytellers.

A Professor of History at El Camino College in Torrance, Walker also serves as the founder/curator of the Gospel Music History Archive at the University of Southern California Digital Library and Board Chair of the BLU Educational Foundation, a national leader in the quest to increase the college graduation rates of students of color.

For more than a decade, Walker served as a research associate at the University of Southern California’s Center for Religion and Civic Culture and for more than two decades he’s produced some of the most important works of Honduran playwright Rickerby Hinds, Director of Playwriting at the University of California, Riverside. His exhibit How Sweet the Sound: Gospel Music in Los Angeles, co-curated with Tyree Boyd Pates, is currently on display at the California African American Museum.

Commenting on the honorary degree and his selection as commencement speaker, Walker said, “Receiving an honor like this really speaks to CGU’s commitment to the arts and humanities as global forces for positive change. Growing up on a dirt road just a few miles east of CGU I never dreamed that something like this could ever happen to a guy like me. I am humbled and honored by the recognition.”