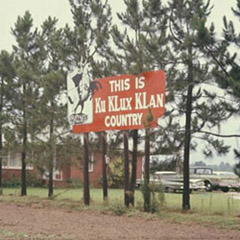 This photo of a Klan billboard was taken by my dad off Highway 70 in 1974 during a family trip to North Carolina. It became an important image in our family vacation slideshow.

Save our Land, Join the…are you kidding me?

Using the threat of illegal immigration to attract new members, the Loyal White Knights of the Ku Klux Klan recently left recruitment fliers in an Orange County neighborhood. It was part of a nationwide recruitment push for new members in preparation for an early August rally to be held in North Carolina, my dad’s home state.

When I was a kid, I recall seeing Klan billboards on our summer trips “back home” and of course I can never forget the stories my father told me of my grandfather’s run-ins with the Klan as well as my father’s own interactions with KKK leaders right here in Fontana.

The targets of hate may be different but the hate is clearly the same. The recorded message on the Klan hotline number found on the flier calls illegal immigration the biggest problem facing the US and advocates a “shoot to kill” policy along the border. I visited the website found on the fliers both in Orange County, California and Harnett County, North Carolina (which seems to be ground zero for the modern Klan movement). Not much has changed with their rhetoric. “Join the Best or Die Like the Rest”…it’s all about Christian values and family values, they claim.

As I read the various news articles on the Klan’s latest recruitment push, I thought it would be interesting to also read the comments after the articles, just to gauge the public’s perception of the news.

Buried among the comments labeling the actions ridiculous and anachronistic, was a post by a guy born in Orange County and now living in the desert, who according to his post is a member of the Klan. I went to his Facebook page and saw his profile pic…a nice looking young dad lovingly kissing his 7-year old daughter. I thought about what he may be teaching her at home. I searched his name to find another article he commented on and shared with a friend from a website that has stories claiming every major tragedy in recent history – including the Holocaust – is an elaborate hoax. These folks tend to thrive on conspiracy theories and exhibit a general paranoia.

These are the people the Klan is looking for, and evidently finding. They lack the ability to think critically, they are full of hate toward anyone who is “different,” and they are teaching the next generation to do the same.

According to the Southern Poverty Law Center there are close to 939 active hate groups in the United States, 77 of them are surprisingly in California. And although the SPLC reports that nativist extremist groups have declined since reaching their peak in 2010, overall hate groups have increased. Hate speech by “traditional” groups like the Klan can easily become hate action. And that definitely is not the kind of land we should want America to become.