Get Tested for COVID-19 . . . For Yourself, For Your Family, Co-workers, Customers, Neighbors and Friends 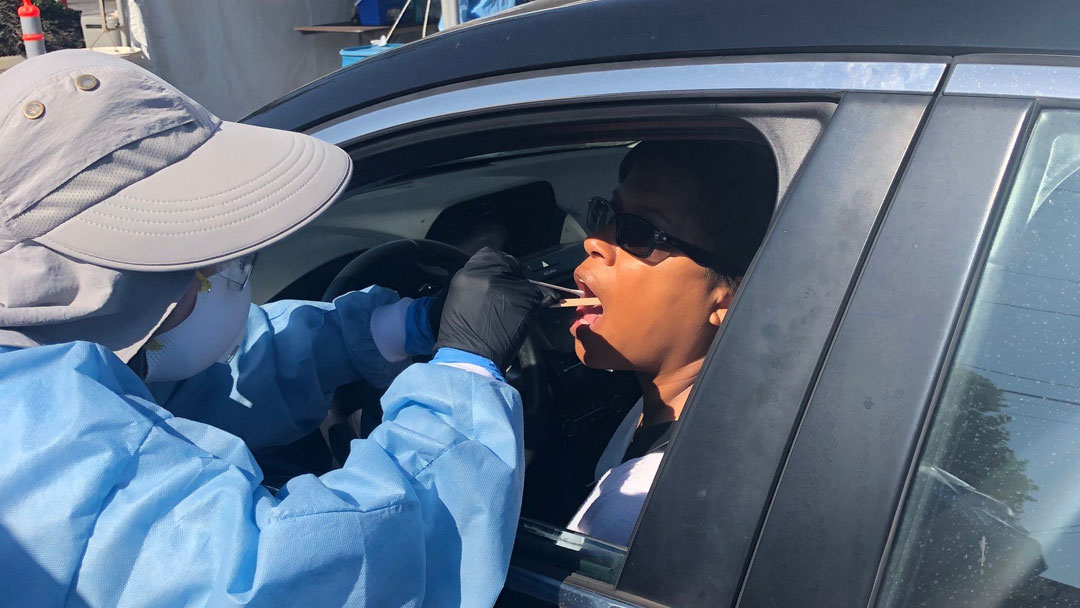 These are times of triple crises — COVID-19, civil unrest and the growing movement to uproot structural and institutional, racism at their core—staying healthy during these turbulent times is a must.

One of the most important ways to protect your health and the health of others is to take time to be tested for COVID-19.

The test is less invasive than you think, takes less time than imagined and is one of the most important contributions you can make in helping to control the spread of this dangerous and too often deadly virus.

For members of the African American and Latinx communities testing is even more warranted as these communities are being impacted by the worst effects of COVID-19 far beyond their percentages of the population at both the state and national level.

According to Dr. Eduardo Sanchez Chief Medical Officer with the American Heart Association, “when a communicable disease outbreak begins, the ideal response is for public health officials to begin testing for it early.”

Certainly, the nation is behind the proverbial “eight ball” when it comes to its testing in response to the COVID-19 Pandemic; however an assertive testing effort is now underway in the inland region and across the state to better assess how widely the coronavirus has spread.

New reports show as California and other states continue re-opening, the virus has continued to spread more broadly in at least 21 states including California.

Testing is important not only because it identifies who has been infected, it is also important because people with immunity from COVID-19 can more safely work in essential jobs without concerns about passing the illness on to others.

Riverside had tested more than 104,700 residents—9,590 of those were confirmed positive for the virus, while testing in San Bernardino County is progressing much slower, through June 9, the county had only tested 6,953 individuals with 3,931 testing positive.

David Wert, spokesperson for San Bernardino County was asked about the county’s poor performance regarding testing as compared to Riverside County.

“I can’t speak for how Riverside County was able to do so much [testing] early on; but early on we were like everybody else—we just did not have access to testing supplies. That was a nationwide problem.” Wert continued adding, “Up until now, we have not been encouraging people to go and get tested because we haven’t had the facilities, but now that we have ten walk-up clinics up and running and we have adequate testing supplies, we are going to start a campaign to encourage people to get tested.”

Wert assured San Bernardino County’s testing outreach effort will begin in the next week or sooner.

Black Voice News Publisher and community leader Paulette Brown-Hinds recently tested for COVID-19 to help raise awareness regarding the importance of testing as well as to demonstrate how quick and easy the process can be.

Speaking about what motivated her to pursue the COVID-19 test she explained, “The coronavirus has had a disproportionate impact on the Black community, both in transmission of the virus and in the mortality rates if we contract it.”

She continued, “We are hospitalized more than other races. We die from it at a higher rate. We’re more likely to work in frontline jobs that have been classified as essential, jobs that have us exposed to more people and potentially more people with the virus.”

Data certainly supports Brown-Hinds’ assessment. According to the Centers for Disease Control and Prevention (CDC), results to date show a disproportionate burden of illness and death among Blacks and other ethnic groups.

According to the American Public Media Lab (APM) as of June 9, 2020, COVID-19 had claimed approximately 112,000 nationally. Race and ethnicity data is available for about 93 percent of those deaths and show continued deep disparities by race, most dramatically for Blacks and Native Americans.    These results are based on aggregated death rates from COVID-19 across all fifty states and the District of Columbia by ethnicity are as follows:

As the figures dramatize, the African-American community remains at high risk.  Based on analysis of the data APM further highlighted, if Blacks had died at the same rate as Whites through June 9, about 14,400 Black Americans would still be alive today.

Another reason it is important to be tested is because so much uncertainty remains regarding the disease and how it may or may not be transmitted by those who are asymptomatic.

“I haven’t experienced any Coronavirus symptoms,” Brown-Hinds explained, “but wanted to make sure I haven’t been exposed to it and unknowingly spread it to those I love and care about, including my mother-in-law who lives with us and who has a number of health conditions that cause her to be at higher risk.

For those concerned about the discomfort of testing Brown-Hinds assured, “The process was simple and only took a few minutes for health personnel to swab my throat. I didn’t even have to get out of the car.”

She received her results in less than a week, and the good news is—it was negative.