Faith In The Inland Empire: Riverside’s Oldest Church More Open Than Most 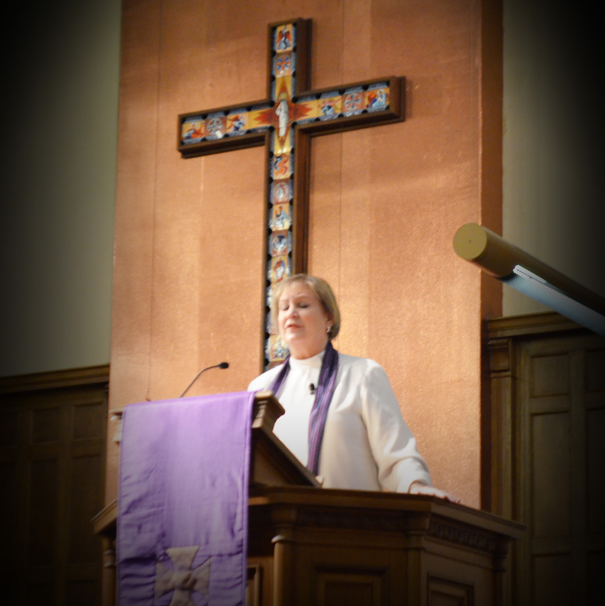 The United Church of Christ is as distinct and diverse as any church, bringing together people from across economic and sexual orientation spectrums. First Congregational Church of Riverside (FCC) is one of the few places of worship that is accepting of everyone.

“And yes we do mean also gay and lesbian,” said Senior Minister Jane Quandt. “Every church says they welcome all people but around gay, lesbian, or transgender, it’s usually we welcome you but we also wish to save you.”

“God made me this way,” said Eva-Genevieve Scarborough, who was born a man but transitioned into a woman twelve years ago.

Quandt said she remembers the first day Scarborough came to FCC in 2006. She can remember Scarborough moving from the balcony and slowly moving closer and closer toward the pews until she made it to where she is now, a volunteer with several different FCC programs and attending women’s conferences every year she is able.

Scarborough knew that the church accepted the gay and lesbian community but wasn’t sure if she would be accepted as a trans woman.

“I was more and more drawn to attend; I fell in love, I just love it,” said Scarborough.

Scarborough said she appreciates that the church has accepted her but also that they are a church of service.

The church has a rich history of serving in the community according to church member Donald Miller.

The church stood with Chinese residents before and after Riverside’s Chinatown fire in 1893 and even counted some Chinese among their members.

Three months after the dedication of the current building on January 25, 1914, FCC was graced with a visit from Booker T. Washington. “Mr. Washington spoke to our church and an overflow audience,” said Miller. “He made a powerful impression on the citizens of that time.”

FCC also supported Riverside’s Japanese- American community holding the assets of many families who were interned. The Harada house was one property that remained intact during the war years and FCC member Sumi Harada occupied it for a time after the war and it is now being prepared as a historical landmark.

Miller said that in the stifling midsummer heat of 1871, Isaac Atherton, senior minister and founder of the First Congregational Church of Los Angeles and John North, Founder of the city of Riverside, shared a buggy on the long ride out to what would soon become Riverside.

“I have no doubt those early members were progressives much like Mr. North,” said Miller, who said FCC is the oldest assembly in Riverside. “The city of Riverside and the First Congregational Church of Riverside share a great deal of history.”

The church has several alumni including Frank Miller, founder of the Mission Inn, who was influential in the current building’s world renowned spanish style. Several mayors have been members of the church including five of the first seven mayors and most recently, former Riverside Mayor Ron Loveridge.

FCC’s building is a City of Riverside Cultural Landmark, a Riverside County Landmark, and is listed on the National Register of Historic Places. The building is a brick structure adorned with stained glass all around and has the feeling of an old Hollywood movie church.

There are more than 5,100 churches and 1.1 million members across the U.S. according to the United Church of Christ (UCC) website. “The UCC is a church of firsts, a church of extravagant welcome, and a church where …they may all be one” (John 17:21).

Rev. Quandt said the church goes out of its way to accept people from all walks of life. She also said they believe in being “out in the world serving. Not just charity work but dealing with systemic injustice.”

The church is still a progressive voice for change and is currently advocating for immigrant farm workers, the LGBT community, the homeless, and ending “America’s prison industrial complex.”

“This church has always had a voice in this community,” states Rev. Quandt. “The stories here have been heroic.”

On March 19, 1995, FCC became an “open and affirming” congregation, affirming the dignity and worth of all races, ethnicities, ages, abilities, genders, and sexual orientation. Quandt said the choice was made after the killing of Jessy Owens, steps away from the church’s entrance. 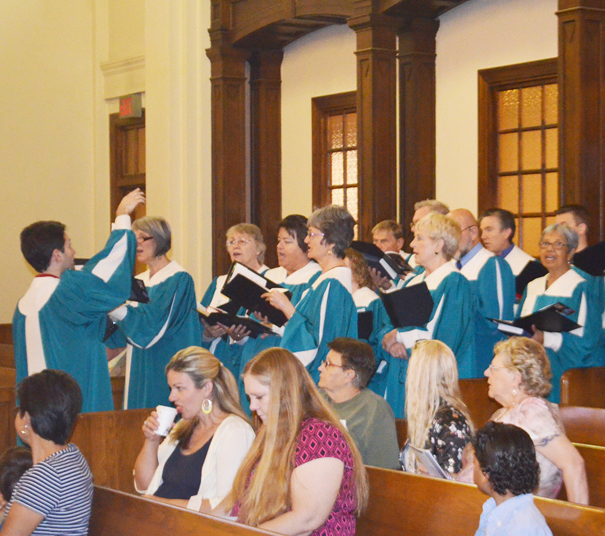 The church put a large rainbow flag up in support. Quandt has continued her support of the LGBT community, and performed the first gay marriage in Riverside County after the Supreme Court overturned the gay marriage ban.

FCC practices Calvinism referring to the “reformed Tradition of Protestant faith based on the works of John Calvin.” Without higher church courts to ensure doctrinal uniformity, Congregationalists have been more theologically diverse than other Reformed churches.

“I think Jesus was a total radical he was totally about compassion, mercy, justice, helping the marginalized, the lost, and the little to be empowered.”

“I know beyond a shadow of a doubt I’m saved,” said Scarborough who said she has been a Christian for more than 30-years. “I can feel him working in me. I’ve seen more evidence of the Holy Spirit in my life than I can imagine.”