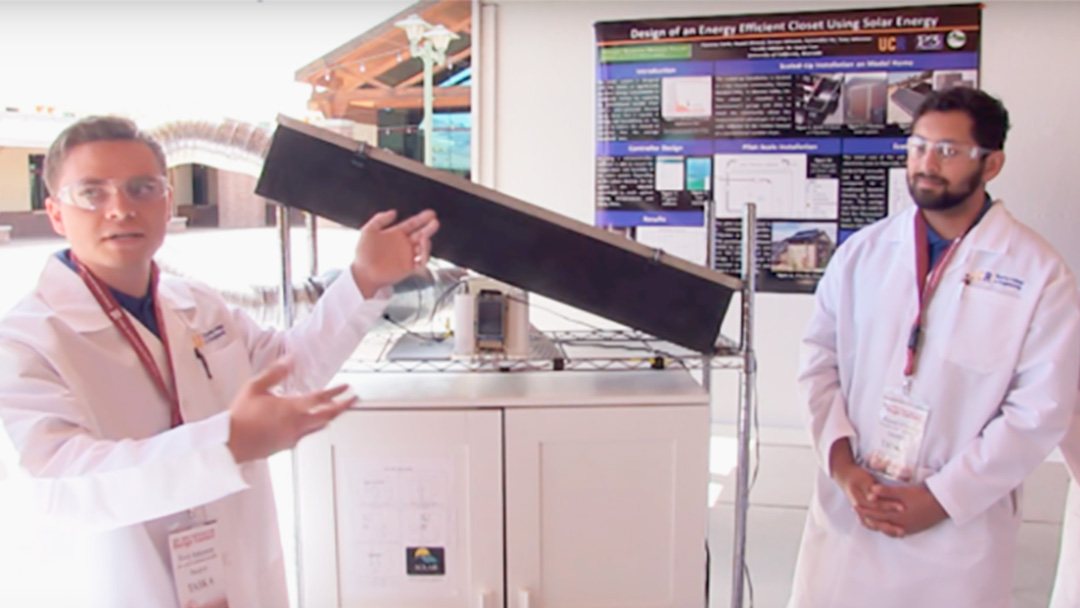 The Waste-Management Education Research Consortium (WERC) held its 29th Annual Environmental Design Contest at New Mexico State University last month.  The university has hosted the event since 1991, and draws hundreds of college student participants from across the country and around the world. To participate in the competition student teams design solutions for real-world problems and develop fully operational bench-scale models of the technologies they’ve developed.  Through out the multi-day contest the student teams showcase their work through a conference-style session that includes both written and oral presentations before a panel of environmental professionals who serve as the contest judges.  This year a team of engineering students from the University of California Riverside won third place for its project named SOLAIR—a new technology for drying laundry that directs air heated by a solar thermal collector into a closet of wet cloths.  The students describe it as “suitable for housing that does not allow outdoor laundry lines.” SOLAIR uses very little electricity and generate no harmful by-products.  According to UCR, the third-place victory represent an effort that actually began about eight years ago when the university’s Marlan and Rosemary Bourns College of Engineering was approached for its assistance in helping the Victory Gardens community in Moreno Valley become more sustainable. The task was assigned to a senior design team.  The design team’s plan earned a $15,000 Proof of Concept Phase 1 Environmental Protection Agency grant that allowed subsequent teams to develop and test a prototype. Since 2011, at least 29 students have worked on the SOLAIR project. The EPA awarded an additional $90,000 in support of the project in a Phase 2 grant in 2012. These funds were used to build the closet in a Victory Gardens house.  Students from every engineering department on campus as well as the School of Business worked on the project over the years according to UCR. When the current team finishes developing and installing microcontrollers to automate the drying process, the long endeavor will be finished. Associate professor in chemical and environmental engineering, Kawai Tam, who led the effort noted that although clothes dryers are the second biggest consumers of energy in most households, most homeowner associations ban outdoor laundry lines. SOLAIR is designed as a sustainable way to dry laundry without offending neighbors with outdoor cloths lines while also avoiding many of the problems with line drying that can include stiffness, etc.  UCR students who participated in this year’s WERC competition included Vanessa Coria, Rayed Ahmed, Samantha Vu, Soraya Johnson, and Tony Johnston.