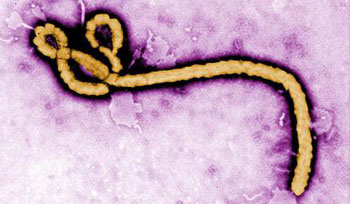 There is no FDA-approved vaccine available for Ebola.

If you travel to or are in an area affected by an Ebola outbreak, make sure to do the following:

• Practice careful hygiene. For example, wash your hands with soap and water or an alcohol-based hand sanitizer and avoid contact with blood and body fluids.

• Do not handle items that may have come in contact with an infected person’s blood or body fluids (such as clothes, bedding, needles, and medical equipment).

• Avoid funeral or burial rituals that require handling the body of someone who has died from Ebola.

• Avoid contact with bats and nonhuman primates or blood, fluids, and raw meat prepared from these animals.

• Avoid hospitals in West Africa where Ebola patients are being treated. The U.S. embassy or consulate is often able to provide advice on facilities.

• Avoid contact with infected people. In particular, caregivers should avoid contact with the person’s body fluids and tissues, including blood, semen, vaginal secretions and saliva. People with Ebola are most contagious in the later stages of the disease.

• Follow infection-control procedures. If you’re a health care worker, wear protective clothing, such as gloves, masks, gowns and eye shields. Keep infected people isolated from others. Dispose of needles and sterilize other instruments.

• After you return, from an area where the Ebola disease has been confirmed, monitor your health for 21 days and seek medical care immediately if you develop symptoms of the Ebola virus.

Scientists are working on a variety of vaccines that would protect people from the Ebola virus. Some of the results have been promising, but further testing is needed.

For more information online, visit the Centers for Disease Control and Prevention (CDC) at CDC.gov. Ebola.