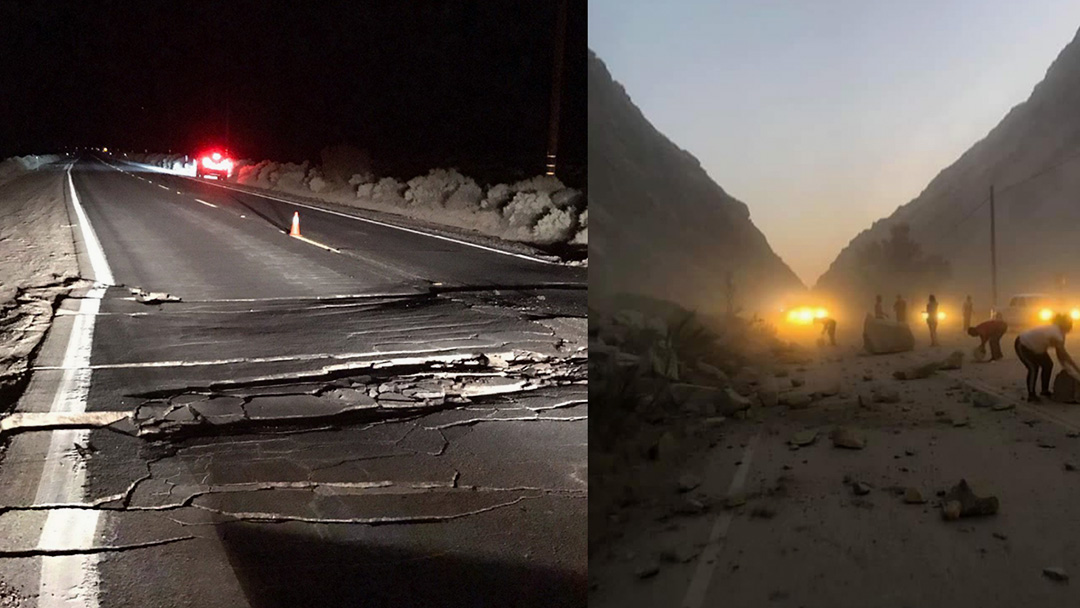 A 7.1 magnitude earthquake rocked Southern California Friday evening, July 5, 2019. It was the strongest earthquake to hit the golden state in 20 years. The state has not stopped rocking since a 6.4 magnitude earthquake struck the same region near the community of Ridgecrest Kern County that hit around 10:34 a.m. on July 4th; for less than a day, it was the strongest quake to hit California in twenty years. Both quakes were felt by millions across a vast area that extended from Los Angeles to San Diego to Las Vegas and beyond. Although the cost of damages from the July 4th quake was estimated between ten to one hundred million dollars that has changed in the wake of Friday’s event.   The Thursday morning quake was followed by a series of aftershocks there were largely expected to decrease in frequency over time. Although the United States Geological Service (USGS) advised citizens to expect 50 to 700 magnitude 3 or higher aftershocks in the following days and weeks, few residents anticipated the greater magnitude earthquake experienced Friday evening.  On average, the USGS explained, a magnitude 6.4 earthquake will produce an aftershock as large as magnitude 5.4, and about 10 aftershocks with magnitude 4.4 or larger. Within one hour of the July 4th earthquake there were numerous aftershocks, the largest of which was a magnitude 4.7 earthquake that occurred two minutes following the event. Friday morning a magnitude 5.4 earthquake struck near Searles Valley.  In the wake of Thursday’s quake the USGS estimated a 9 percent chance of one or more aftershocks of magnitude 6.4 or larger in the next week. That probability became a reality with the 7.1 event Friday evening.  Though the quake triggered fires, power outages, and other damages, fortunately there were no reported deaths.  Over the past 40 years, eight other earthquakes of a magnitude five or greater have occurred within 31 miles of the quakes experienced July 4th and 5th. The largest of these was a magnitude 5.8 event on September 20, 1995, centered about eight miles to the west-northwest of the July 4th earthquake. It was felt strongly in the China Lake-Ridgecrest area, and more broadly from Los Angeles to Las Vegas.  In the wake of Friday’s earthquake CalTech experts say the state can expect nearly 30,000 aftershocks of a magnitude 1 or greater in the coming weeks. In addition, they advised there exists a 27 percent chance for an aftershock of a magnitude 6 or greater in the coming week and further warned of a three percent possibility of a magnitude 7 quake in the next week.  California Governor Gavin Newsom has  declared a state of emergency for parts of the state that experienced the most damage from the quakes and sent  a formal request to President Trump on Saturday requesting an Emergency Declaration for Direct Federal Assistance in the wake of the July 4 and July 5 earthquake events. Locally, all County Fire Divisions moved equipment onto their pads and assessed potential damage; the Inland Counties Emergency Medical Agency (ICEMA) conducted hospital polling for damages; and the Office of Emergency Services polled city/towns for damages as well. These agencies remain vigilant. Inland residents who need information regarding earthquake preparedness can visit CalQuake Inland Empire at http://www.calquakeinlandempire.com/informationlinks.html for preparedness information.