Down But Not Out: Confronting the Homeless Crisis in San Bernardino County 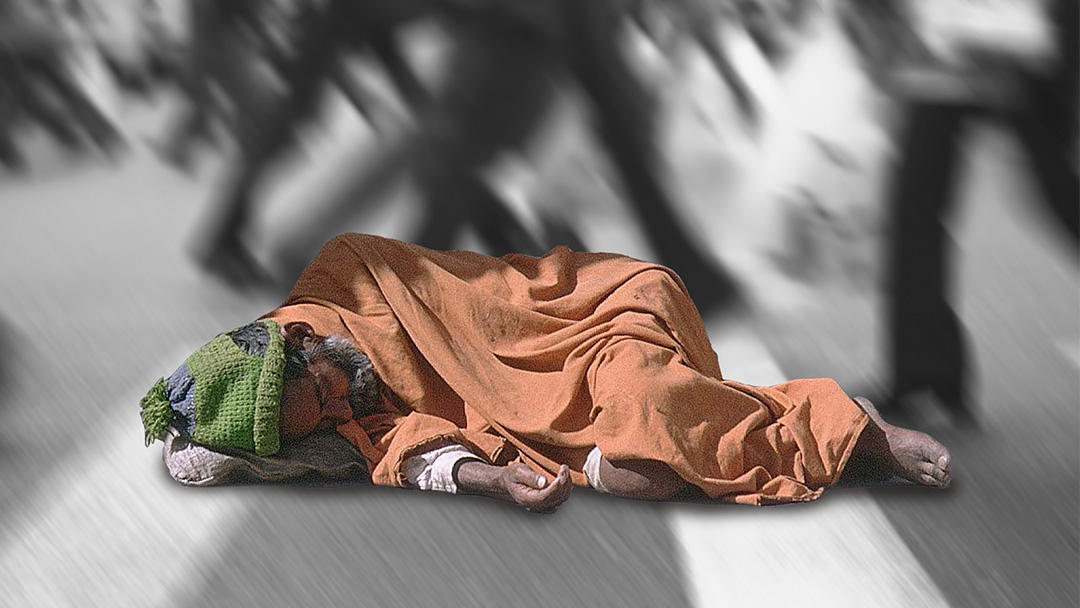 They say that timing is everything and whether driven by design or intention, California Governor Gavin Newsom’s recent visit to San Bernardino to meet with local service providers and municipal leaders on the issue of homelessness could not have been more fitting.

On the afternoon of April 16th Governor Newsom gathered with San Bernardino County Supervisors Curt Hagman and Josie Gonzales along with the county’s CEO Gary McBride and representatives of several organizations and representatives from key county agencies, all of whom are committed to working toward mitigation efforts aimed at curtailing and serving the homeless within the county.

These leaders and others in the community have coalesced around this issue and are determined to work in partnership to identify and implement solutions to the homeless problem in San Bernardino County where, like elsewhere in the state and across the nation, the number of homeless has reached near crisis levels.

“We have come dangerously close to accepting the homeless situation as a problem that we just can’t solve.”
Linda Lingle

This was most clearly evidenced last Wednesday, April 24 when, within days of the governor’s visit, the San Bernardino County Homeless Partnership released its 150-page report revealing the official results of the county’s 2019 Point in Time Homeless Count (Count)—a one day street- based count and survey that assesses the number of sheltered and unsheltered individuals in the county.

This year’s Count was conducted on January 24. More than 200 individuals participated in the effort and for the first time, used technology—including a digital app designed to help facilitate its accuracy. During the Count, homeless individuals are provided with information regarding local services available to assist them. 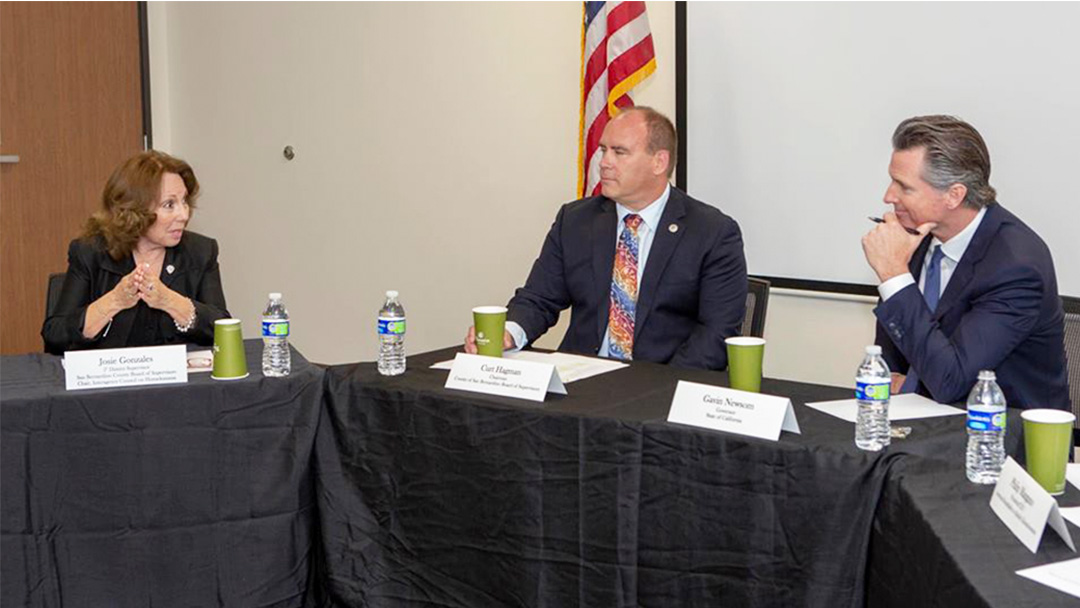 Although the county’s homeless population experienced a slight decline in 2017, it has experienced a sharp rise in its population in both 2018 and 2019. This year’s Count identified 2,607 individuals who were without a permanent home, representing a breath-taking 23 percent increase over 2018—during the 2018 Point in Time Count, 2,118 homeless persons were identified in San Bernardino County.

The San Bernardino County Homeless Partnership attributed part of the increase in numbers to the effective use of technology in the counting process—however, locals cannot deny what they see on the streets, under highway overpasses, in parks, and doorways of shuttered businesses—there are homeless people everywhere—something is driving people to the streets. 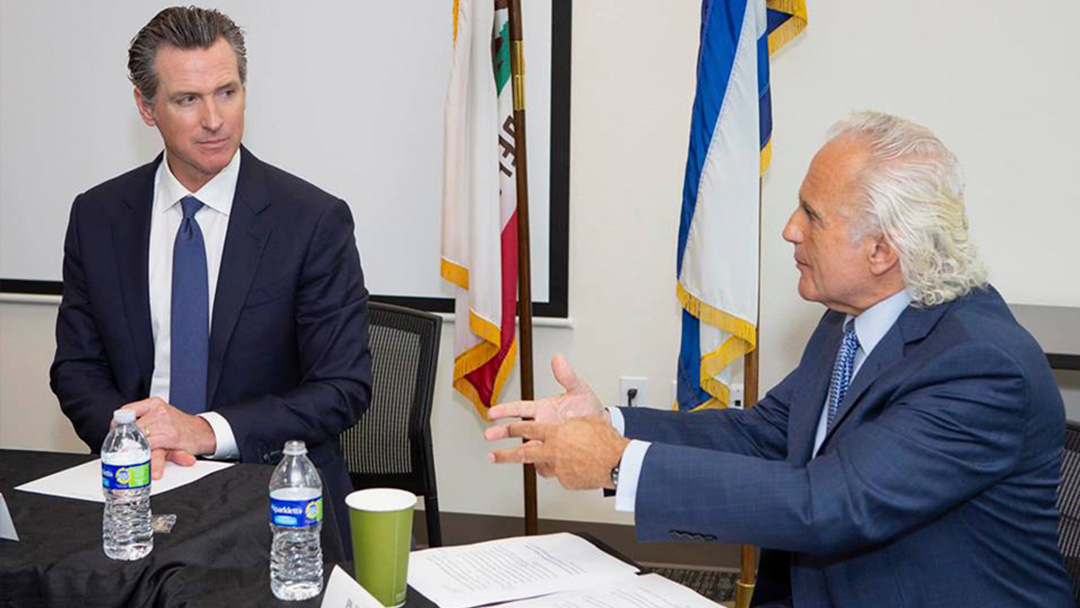 Among the most alarming statistic in this year’s report were the 1,873 adults who became homeless for the first time during the previous year.

Experts believe the high cost of housing in large part resulting from a limited housing supply plays a key role in pushing more and more people to the streets, especially those with fixed incomes and workers whose wages have remained sluggish and failed to keep pace with the rising cost of rental housing.

In her Twitter feed Gonzales acknowledged, “Nothing worth solving is easy. To that end, addressing homelessness is not easy, it’s an extremely difficult issue that requires all our ingenuity and effort. Together,” she stressed, “we are working to find different innovative solutions.”

During the meeting with the governor, county officials and their partners in the efforts to curtail homelessness, outlined breakthrough ideas to address the issue in ways that included two foundational pillars—managed healthcare to help ensure homeless individuals who acquire housing are supported so they attain and maintain both physical and behavioral wellness. The second and equally important pillar would convert as many as 75 hotels and motels in the county to homes for the homeless. 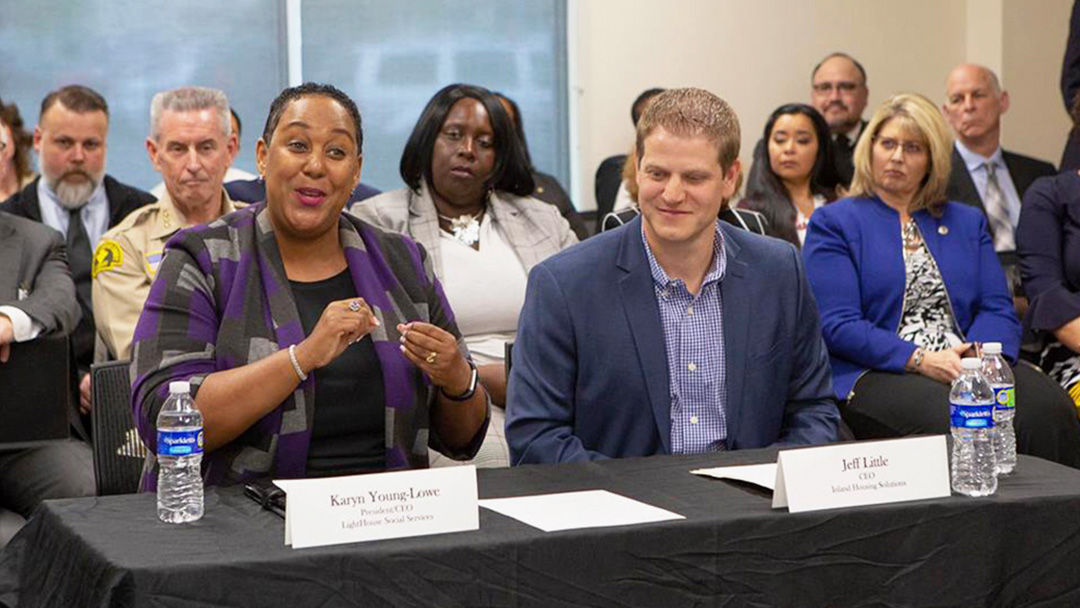 In her Twitter feed, Supervisor Gonzales who chairs the Interagency Council on Homelessness that is leading the county’s efforts to end homelessness declared, “Nothing worth solving is easy. To that end, addressing Homelessness is not easy.  It’s an extremely difficult issue that requires all of our ingenuity and effort.” Adding, “Together we are working to find different innovative solutions.”

According to Gonzales the meeting with the governor afforded an opportunity to discuss some of the most promising and innovative methods the county is using to address homelessness. “Meetings and discussions like this promote the kind of cross-government collaboration that is needed to effectively address the challenges involved with reducing homelessness. I look forward to seeing how we can continue to work together to create solutions.” She also noted, “I look forward to continuing to work together to create solutions.”

Gonzales has spoken committedly to the significant need for additional funding to enable the coordinated delivery of housing, physical and mental health, as well as other critical services to the homeless in San Bernardino County.

The governor reacted positively to the county’s strategic plans referring to them as “big ideas” and appeared to heed Gonzales’ call for funding. He pledged to work with the state legislature to allocate funds in the coming budget in support of local efforts on this issue.

Newsom noted how he saw this as an extraordinary opportunity. “I have the privilege of this moment to convince my legislative colleagues that this is a wise investment,” he declared. He further commented how he was re-energized on this issue highlighting the need to place a greater focus on this issue in his budget.

“There are wonderful things happening at the local level,” the governor declared adding, “We’ll have your back. . .”