Denver’s Defense Gets Defensive Against Carolina 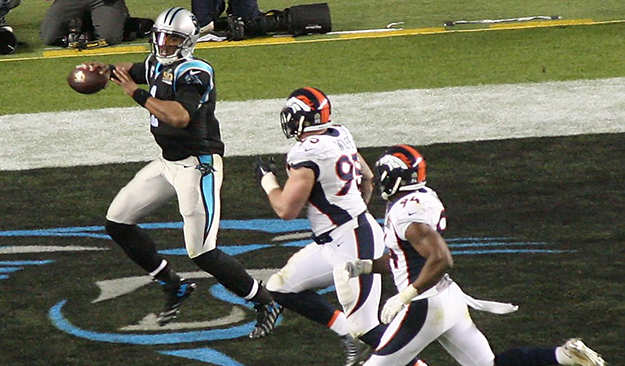 Cam Newton run for his life as Denver puts the heat on. Photo by Gary Montgomery

Their massive photos only reaffirmed what I already knew, and that is, the NFL is a quarterbacks’ league. It is safe to say signal callers are the most important players on the field, and, generally teams that win consistently have one thing in common: an elite quarterback.

Well, Super Bowl 50 indeed had elite quarterbacks; however, this contest showcased elite defenses as the Carolina Panthers and the Denver Broncos each fielded what many note were the two best defensive squads in the league.

The first half of the game both defensives just dominated. In fact, Denver scored its only touchdown after a monster hit and strip by Super Bowl MVP, Von Miller, that was recovered in the end zone by defensive end Malik Jackson giving the Broncos a 10-0 lead in the first quarter.

How bad did the offenses featuring the quarterback of the future (Newton) and a future Hall of Famer (Manning) play?

Denver, the winning team, made infamous Super Bowl history gaining 194 yards on offense, the fewest by a winning team ever. That number was 50 yards less than the record the Baltimore Ravens set in 2001. Even worse is the fact Manning’s team was 1 for 13 on third downs.

Let’s look at Newton, who produced one of the best statistical regular seasons in the history of the league. He completed just 18 of 41 passes for 265 yards. He fumbled twice, was intercepted once and was sacked six times. Together the teams combined to set a Super Bowl record for most collective sacks: 12.

Manning, who at 39 was the oldest quarterback to start a Super Bowl, said the game reflected the Broncos’ resilience.

“This game was like this season in that it tested our toughness,” Manning said. “It tested our unselfishness. It’s only fitting it turned out this way.”

After the game reporters cajoled Manning to take a position on his possible retirement, but he did not bite on that line of questioning concerning if this was indeed his last game.

Much to the consternation of many reporters and me, Newton came into the post-game press conference in a serious funk and did not engage the mass of reporters. He gave one-word answers and after a few questions walked out the interview session.

If I was Newton’s public relations person, I would have coached him to just come in and give respect to Manning, the Broncos, the Super Bowl itself and just lighten the mood with a funny quip.

With their victory in Super Bowl 50, the Broncos are the ninth franchise to win as many as three Super Bowl championships. This was the eighth Super Bowl appearance for the Broncos, matching the record also shared by the Patriots, Steelers and Cowboys.

Ironically Miller, who was the second overall selection in the 2011 draft after Newton, became the 10th defensive player in Super Bowl history to be selected as the Super Bowl MVP by tossing Newton on the turf with a purpose. Miller had 2.5 sacks, 6 total tackles, 2 forced fumbles, 2 hurries and a pass defended.

The other three linebackers to be chosen Super Bowl MVP are Chuck Howley of the Cowboys (Super Bowl V), Ray Lewis of the Ravens (Super Bowl XXXV) and Malcolm Smith of the Seahawks (Super Bowl XLVIII).

“He (Miller) was absolutely tremendous,” said Broncos head coach Gary Kubiak. “Our defense was just special, and they have been all year long. Miller is a hell of a player, but he has become a great pro, great man and a big leader on this football team. So, (I am) just very proud of everybody, but (I am) especially proud of him.”

Kubiak gave praises to his entire defense, noting that they were “very disciplined as far as our rush goes,” and he was extremely pleased at his team’s “effort in chasing Newton down, stopping the run, getting the turnovers, that’s the reason we’re standing here tonight.”

With the win, Manning became the first NFL quarterback with 200 career wins (186 regular season and 14 postseason). He had been tied with Brett Favre, a member of the Pro Football Hall of Fame Class of 2016, with 199.

Panther’s coach Ron Rivera recalled how Denver got toasted by Seattle a couple years ago in the Super Bowl and he likened that experience to what his team went through. “We have to learn from this disappointment and continue to grow as a team,” he said, “and we have to go to work to take ourselves to that next level.”

Only time will tell if Rivera and Newton will be a one hit wonder or they will indeed keep it coming. My guess is they have a lot of work to do.

Leland Stein can be reached at lelstein3@aol.com or Twitter @LelandSteinIII