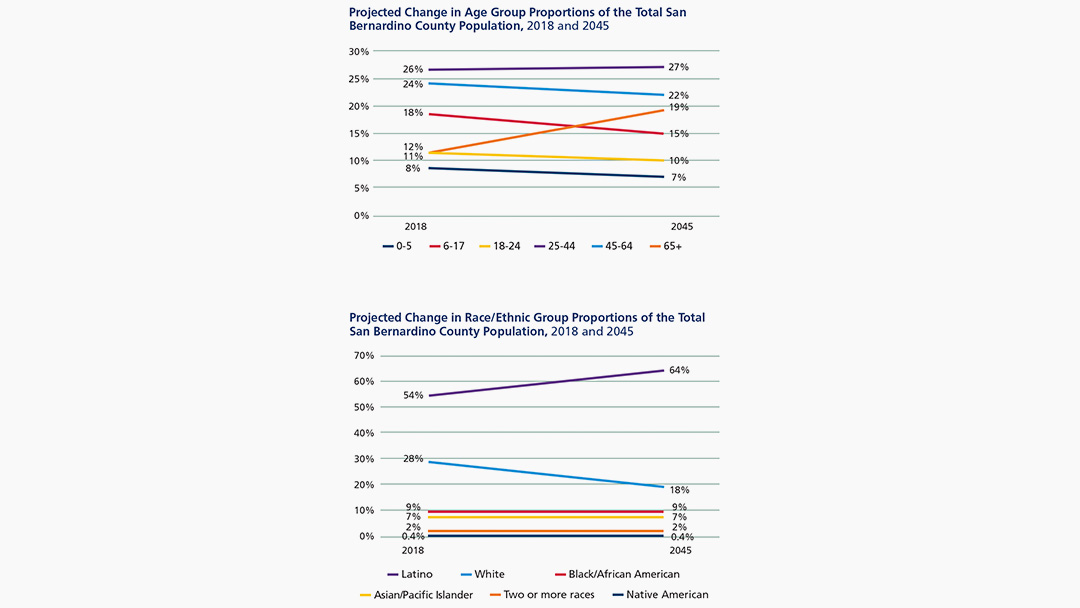 San Bernardino recently published its 2018 Community Indicators Report which provides residents and businesses with an annual assessment of how the county is doing across a range of indicators.

The report takes an objective look at the county from several perspectives including the economy, schools, healthcare, public safety, the environment and overall quality of life. This is the first year the county has exclusively published a digital version of the report.

Due to its expansive nature, The IE Voice/Black Voice News will explore key areas of the report over time beginning this week with a look at the county’s changing demographics.

In terms of absolute growth, all age groups in the county are projected to increase at varying rates between now and 2045 from 7 percent among young children ages zero to five to 100 percent growth among seniors ages 65 and older. In addition, the percent of the county’s population that are ages 65 and older will grow from 12 percent of the county’s population in 2018 to 19 percent by 2045.

By comparison statewide, children ages zero to five are expected to decrease by three percent over this same period while the senior population is projected to increase 99 percent.

At least 20 percent of the county’s population in 2018 was born outside the United States, and 51 percent of residents spoke a language other than English at home. In addition, the average number of residents per household was 3.3, while at least 34 percent of families with children under the age of 18 were headed by a single mother.

Finally, despite an unemployment rate of 4.2 percent in August 2018, the county experienced an overall poverty rate of 16 percent and a child poverty rate of 27 percent.