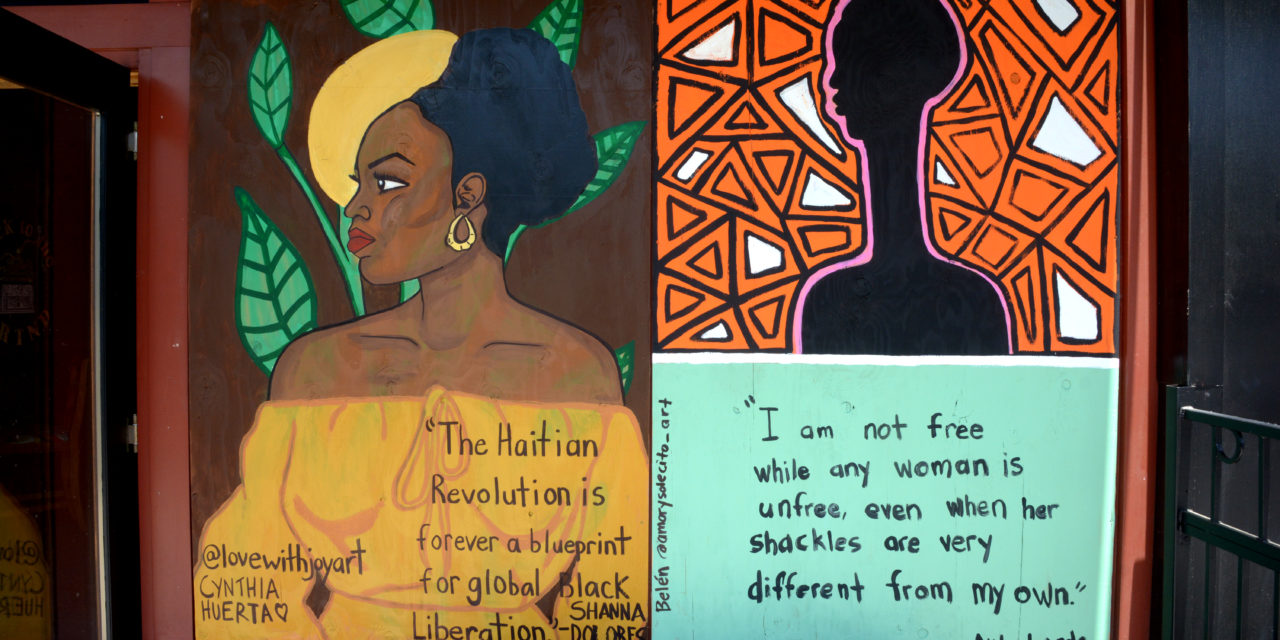 Downtown Riverside business owners decided to partner with local Riverside artists to shine a positive light and to stand with the Black Lives Matter Movement by using the plywood covering their doors and windows as artists’ pallets to create an optimistic and affirming  mural that flowed from storefront to storefront.

Ana Yeager Lee, shop owner of Women in Tandem, a workspace and lounge for women in Riverside, said she was hesitant at first to board up her business because she didn’t want it to look like she was defensive or in fear of lawful protests.

“It was kind of surreal seeing a lot of businesses directly on Main Street boarded up that Monday,” said Lee.

Lee collaborated with artist Desire Cheri who came up with the quote, “Together We Can,” and the idea of painting two women with different complexions hugging one another.

“Watching so many artists and businesses create the artwork made me hopeful, she said after images started sprouting up on boarded up storefronts throughout the downtown.

The Riverside Art Museum sent a photographer to capture documentary photos of all the artwork to keep for museum records.

“I find it so inspiring that it happened so quickly and so many people came together with so many positive messages,” said Drew Oberjuerge, Executive Director at Riverside Art Museum. “Riverside has this city moniker that we’re the ‘City of Arts and Innovation’ so what happened Thursday and over the weekend was just a great example of that.” 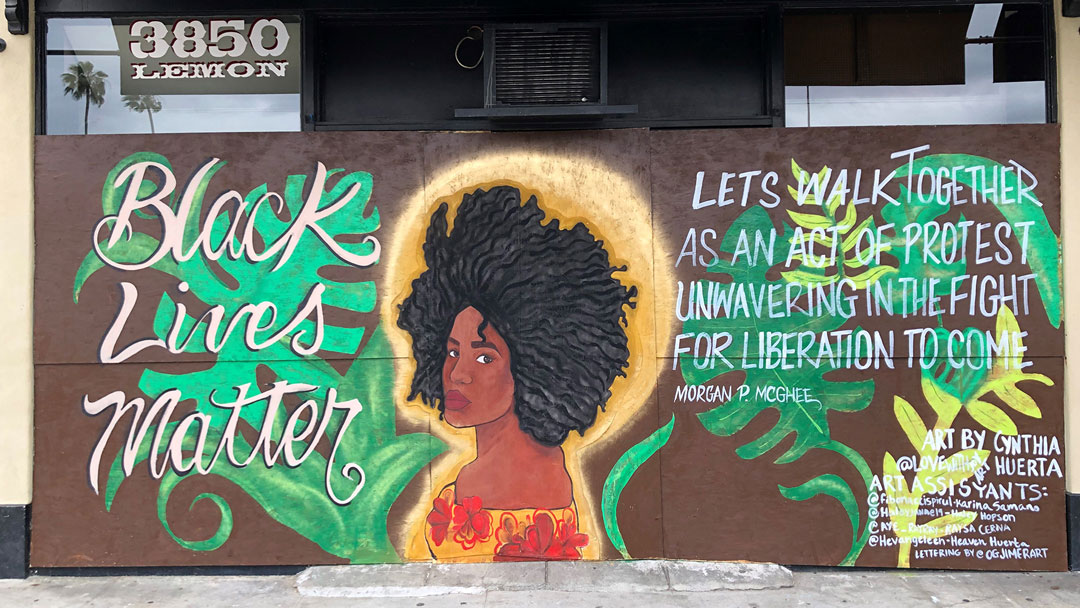 The next decision the artists have to make is on what to do to protect the artwork from being thrown away as businesses reopen and begin to take down the boards.

“Anything that the museum can do to help and support them, we definitely want to help,” said Oberjuerge.

Founder of Black Roses, a brand experience firm in Downtown Riverside, Dex Alexander began figuring out what to do with all of the art next,  and is working with artists directly to see what they can do.

“I talked to our building owner and there’s some open space in our building. I want to let everyone know if there is no place to store your art, we can store it all here until we figure out what we are going to do at a later date,” said Alexander.

His goal is to preserve the artists’ artwork, have the artists obtain ownership of the pieces, and to have them displayed in a museum or somewhere downtown as a memorial.

“I was so moved by the spontaneity, the human response to what is happening in our world and that people poured out and communicated through art, not in violence, not in looting, not in any of those things which I think, in and of themselves, are valid forms of communication,” said Alexander, “I was moved by the fact that they chose art, because I think art is healing and art gathers community. And for Riverside the ‘City of Arts and Innovation,’ it’s absolutely necessary and essential.”

At the moment no plans are in place for what will happen to the artwork next.

Riverside artist Cynthia Huerta partnered with Back To The Grind, a Black-owned coffee shop, and Division 9 Gallery, a space for artists– both located in Downtown, to paint pieces that express the fight for liberation.

“In this movement I have to support my Black community, I am a person of color, a Mexicana,” said Huerta, “But what I know and what I can do is teach through art because I’m also an artist. I wanted to paint somebody who is living and who I’m fighting for and who we should all be fighting for.”

Huerta’s Division 9 Gallery piece was inspired by her close friend, Morgan P. McGhee. She collaborated with McGhee who came up with the quote “Let’s walk together as an act of protest unwavering in the fight for liberation to come.” Added to the quote was an artistic and bold illustration of McGhee.

The second piece located at Back to the Grind was influenced by her close friend Shanna Dolores, who wrote her own quote, “The Hatian Revolution is forever a blueprint for global Black Liberation.” Added to the quote, was a striking illustration of Dolores.

“That’s what everything is, it’s been wanting to amplify the voices of Black women and Black people in general,” said Dolores, “But since I have a lot of beautiful Black women that are my friends, I get to highlight them, let them speak from the heart, and I am a vessel to help push that message.”

The takedown of the murals began Monday June 8, as some businesses prepared to open the following day.