City of Rialto Approves Wastewater Microgrid P3, Possibly First of Its Kind in the Nation 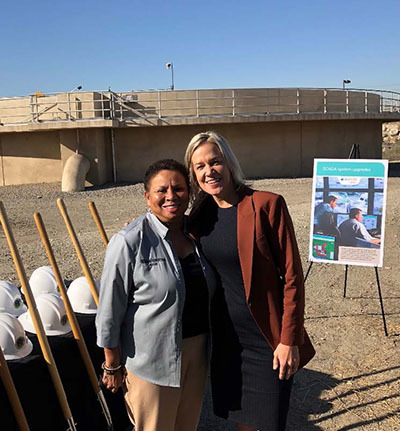 Under the stewardship of Mayor Deborah Robertson, Rialto has set a standard for the nation to follow in the area of bi-partisan cooperation.

Recently, the city council unanimously agreed to proceed with the design and construction of a renewable energy generating and storage facility at the city’s wastewater treatment plant. As configured, the Rialto Microgrid Project is believed to be the first of its kind in the nation, benefiting the environment, the grid, and the ratepayers.

As members of Rialto’s Utility Subcommittee, Mayor Deborah Robertson, a Democrat, and Mayor Pro Tem Ed Scott, a Republican, have come together once again to lead their city forward.

This latest initiative, the Rialto Wastewater Microgrid, will shrink the facility’s carbon footprint, materially reduce the cost to operate, and even provide revenue generation opportunities from the production of green energy.

This development is just the latest in an impressive list of progressive and community-enhancing actions taken by the leaders of Rialto over the past 15 years.

The benefits created by the Microgrid Project come from three cooperating systems to generate and store electricity. First, the new facility will no longer need to burn or “flare” excess biogas waste. The practice of flaring involves the expense of purchasing natural gas to mix with the biogas, as well as creating wasteful carbon emissions. Instead, a new and efficient reciprocating engine will convert the waste gas into electricity for plant operation. It will also provide heat to the digesters, eliminating another need to purchase natural gas for heating.

Second, the facility will have a small-scale solar power installation which, combined with the reciprocating engine, will convert the plant from a net user of electricity to a net producer.

And third, the new facility will have a bank of lithium-ion batteries. Not only will the batteries allow for the storage and potential sale of energy back to the grid during peak demand, but they will also provide the facility with much needed backup and redundancy for secure and reliable operation.

“Rialto’s Microgrid is an example of a triple win, where the ratepayers of Rialto can see an economic benefit from a project that is also good for the environment, and good for our resilience during emergencies,” said City of Rialto Mayor Deborah Robertson. “We are very excited to be moving forward with this initiative.”

By envisioning all three components working together at an individual utility, with the ability to meet 100 percent of its power needs and isolate from the grid during emergencies, Rialto is breaking new ground. The City currently spends more than $800,000 a year in electricity and natural gas purchases. The project aims to net ratepayers $350,000 to $550,000 of that and cover its own cost of design and construction.

There may also  be revenue-generating opportunities on top of the core project. Better financial performance benefits both current and future ratepayers by offsetting the need for future rate increases.

The move away from the practice of flaring excess biogas and the move toward generating clean power is expected to  reduce the facility’s carbon footprint by an estimated 600 metric tons annually. Better environmental practices help preserve healthy communities. Finally, the move toward energy independence and on-site energy storage ensures continuous service and protects the integrity of the system.

Rialto’s relationship with Ullico began in 2012, when the City and the Rialto Utility Authority (RUA) entered into a 30-year concession agreement with Rialto Water Services (RWS, owned by the Ullico Infrastructure Fund and Table Rock Capital) as a  public-private partnership (P3) to manage, maintain, and upgrade the City’s water and wastewater facilities. Using a P3 to improve a city’s water and wastewater system can be challenging.

“Rialto is one of a handful of municipalities to pull it off,” said Mayor Pro Tem Ed Scott. “Not all cities are up to it, but we really believed in the P3. We found the right private partners, we did the work, and it has strengthened our city as a result. In our ninth year of this 30- year partnership, the new Microgrid is just the latest innovation we’re working on together under the P3.”

Still today, Rialto is one of only 19 cities in California to even adopt the utility structure necessary to support this form of P3.

Specifically, the structure used by Rialto attracted P3 dollars for water and wastewater improvement and community investments, and shifted much of the financial and operating risk of the enterprise away from the municipality and onto the private partner. Rialto’s P3 approach allows the City to maintain ownership of all public assets, have decision-making authority, and set rates. Day-to-day management of the facility is in the hands of Veolia Water West, a global firm with expert resources and a record of success in operating utilities and municipal systems. At the same time, fresh capital is introduced that brings to life long-delayed capital improvement projects and is on hand when a landmark project like the Rialto Microgrid comes along.

Together with the City and RUA, RWS has been able to deliver more than $41 million in capital improvements as a result of this P3, and is prepared to fund the Rialto Microgrid as well. The partnership has led to numerous other benefits for Rialto, including cost and energy efficiencies, seismic retrofits, improved water supply, improved wastewater capacity, and hundreds of new construction jobs for the local economy.

One notable and planned benefit to the citizens of Rialto and the surrounding area has been the job creation associated with the operation of the facilities and the construction of the capital improvements. The recently completed wastewater treatment plant upgrade and expansion, for example, was built using a Project Labor Agreement that ultimately created over 50,000 total man hours and over 10,000 apprenticeship man hours. Rialto prioritized local job creation and employee retention as part of the partnership from the start, and these goals are being realized every day.

As a result of this nearly decade-long partnership, Ullico and Table Rock Capital enjoy a front row seat to the relentless drive of Rialto civic leaders to enhance the local community. “From my first meetings and community events in Rialto, it was obvious that the leaders of Rialto were focused on the long game,” noted Megan Matson, a Partner at Table Rock Capital “So many cities are suffering from “kick the can” leadership that leaves core infrastructure failing and budgets strained. Rialto takes charge of its own future, makes tough decisions, and puts in the effort. It makes you proud of what good, service-oriented government can be. The list of innovative, bold but pragmatic accomplishments is really remarkable.”

In 2011, the City of Rialto partnered with West Valley Water District on a first-of-its-kind project to remove contaminant perchlorate from well water using microbial remediation. The project received the first potable water permit in the world for this type of remediation process and eliminated costly chemical treatments and the challenges related to resin disposal. Rialto’s thoughtful vision not only boosted the availability and affordability of safe drinking water in the area, but also helped reclaim city wells damaged by the past.

The bipartisan efforts of the Rialto leadership team has resulted in enterprising initiatives like the partnership with West Valley Water District and the Rialto Microgrid P3, and others. Observers note such efforts consistently strengthen the viability of the city, improve the community, and enhance the lives of its citizens.