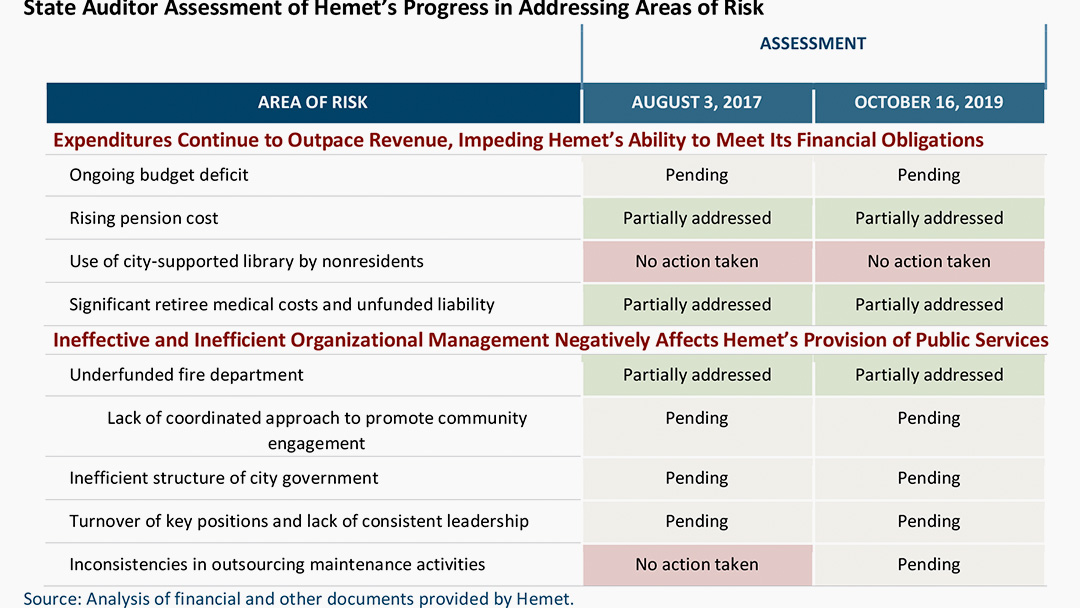 It’s been three years since California State Auditor (Auditor) Elaine Howle issued detailed results of its audit of Hemet. It concluded at the time issues related to the city’s finances and organization required the agency to categorize the city as being at “high-risk.”

Whenever the Auditor makes such a determination, state regulations require the designated municipality to submit written updates and supporting information regarding its progress in addressing the areas of risk identified in the audit report within six months of the date the report is published, and every six months thereafter.

State law also requires the Auditor to issue a report at least once every three years with recommendations for improvement until as Howle noted, “We determine that the local entity has addressed the areas of risk identified and is no longer high risk.”

Hemet has failed to meet these reporting requirements. Since the audit report was released in August 2016 according to Howle, “Hemet has provided just three updates, one each in August 2016, May 2017, and August 2017.”

Howle continued, “Following our receipt of the August 2017 update, the city underwent several changes in leadership. Significantly, the city manager in place at the time of the August 2017 update resigned that same month. The city hired a new city manager, who failed to provide any requested updates on the city’s progress, even though we made several requests for further updates.”

She continued, “In March 2019, the city council terminated his contract and Hemet’s deputy city manager is currently serving as the interim city manager until the city can recruit and hire another new permanent city manager.”

The Auditor’s office met with Hemet’s interim city manager in May 2019 to discuss the status of Hemet’s actions to address the areas of risk identified in the 2015 audit report and reviewed documents provided by the city in response to its inquiries. The city has experienced constant turnover in its city manager position in recent years. Currently the interim position is held by Christopher Lopez.

Howle noted that despite the continued turnover in the city manager position—an area of risk identified in our audit report—Hemet has made some progress in addressing the audit’s identified areas of risk; though she also stressed many areas remain in which the city must still work to mitigate risk factors.  Following is the Auditor’s assessment of the city’s current status:

In June 2019, the city council approved Hemet’s fiscal year 2019-20 budget. Due in part to a transfer to the general fund of $1.2 million of its Measure U revenue—an addition of one cent to the sales tax that voters approved in 2016 to raise funds for public safety—Hemet balanced its general fund budget.

Although Measure U is a general tax that the city can use for any purpose, the city council adopted a non-binding resolution that the city may only use Measure U proceeds to fund its public safety costs.

The city also set up a Measure U oversight board to ensure that the city uses the funds for their intended purpose. The interim city manager proposed the transfer of Measure U funds to the general fund in the city’s fiscal year 2019–20 budget, and the oversight board approved it.

Without several other, smaller transfers from other city funds and the Measure U transfer to offset public safety costs, Hemet’s general fund budgeted expenditures would have exceeded its revenues.

In its August 2016 report, the Auditor noted that the city’s five-year expenditure and revenue projections in use at the time were inaccurate and overly optimistic. It recommended Hemet reassess its projections and revise them as necessary.

In response and in line with the Auditor’s original recommendation to reassess and revise its expenditure and revenue projections, Howle stated it is critical that Hemet develop a financial model to project accurately its future expenditures before the city develops its fiscal year 2020–21 budget.

In addition to the ongoing budget deficit other areas of concern in this category include rising pension costs, use of the city supported library by nonresidents and significant retiree medical costs and unfunded liability.

In 2016, the Auditor identified inconsistencies in Hemet’s outsourcing of maintenance activities as an area of risk. As of August 2017, the last update provided by the city, Hemet had yet to take action to address this area of concern.

Trouble areas in this category include the underfunded fire department and a lack of coordinated approach to promote community engagement, inefficient structure of city government, turnover of key positions and a lack of consistent leadership and finally, inconsistencies in outsourcing maintenance activities.

The Auditor had previously suggested the city may be able to recover some of its costs associated with providing emergency medical services by charging a fee that did not exceed the cost of providing those services. The Auditor further recommended in its report that the city reorganize its government structure in order to better align similar functions and provide opportunities to leverage staff resources among other recommendations.

Overall, according to Howle, although Hemet has recently initiated steps to address the areas of risk identified in its 2016 audit report, “It has not made sufficient progress for us to remove the high-risk designation.”

The Auditor further reported the Hemet City Council recently directed staff to explore the feasibility of various actions recommended by the agency. “[A]s of September 2019, the interim city manager confirmed that staff has not completed its analysis and the city has not yet determined what actions—if any—it will take,” Howle advised.

She continued, “For other specific risks about which the city has previously provided us updates, we have assessed those efforts to address the risks as pending or partially addressed, and, in one instance, as—no action taken.

In conclusion Howle highlighted her agency’s commitment to continue monitoring for Hemet’s next corrective action plan while also working with the city as it continues to address the areas of risk identified in the August 2016 audit report.