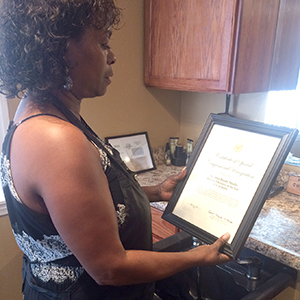 In the Summer of 2001 Brenda Carr, along with her teenage son, were told they had less than 45 days to leave their home. She had just opened Genesis Hair Studio earlier in 2001. She believed she had achieved her lifelong dream of owning her own salon. But her dream was slipping away under the weight of the economic downturn.

She sought help from the Small Business Administration of Rialto. They told her to do what everyone else does, turn her business address into her home address.

She could never have imagined she would spend the next six months calling her place of business, her home as well.

But she endured with the help of God and her family.

“I just refused in my mind to turn back I’m not going back to where I came from,” said Carr. “Anything that is going to keep me from elevating I have to move out of my way.”

She came from South Los Angeles when the drug epidemic first took root. Her mother moved her out of South Los Angeles to attend high school in Pomona, but she still ended up with her first child at 17 and had to receive her diploma from continuation school.

With the pressure of single motherhood she decided to go to beauty school to provide for her daughter. She had always thought about having her own shop, being her own boss, and providing financial stability for her family.

She worked at shops around the inland valley for years and eventually in early 2001 saved enough money to open her own shop.

She said she not only wants to make money but also become a beacon in the community. She helped homeless advocate, Kim Carter, CEO of Time For Change Foundation on several occasions, hosting fundraisers to help raise funds supporting homeless women. “I could tell one of the ladies, I really connected with her. Building self esteem that’s what I like.”

“She was fantastic,” said Carter in an email. “She made a huge impact on the women’s self esteem and self worth. I know for a fact that a few of the women who got jobs said it was because their confidence was so high because Brenda helped them.”

“Genesis Beauty Studio started as a dream for me, and then it became a goal and eventually developed into a reality. I know and understand the importance of maintaining your image when you are in the community and seeking employment,” said Carr.

She has also given back-to-school haircuts for children multiple times.

Carr does all this because she knows what it’s like to be down and out. She has had to live at her shop twice because of hard times in her life. But through all of those hardships she persevered.

“I’ve faced a lot of challenges,” states Carr. “This was a long time goal, I always claimed I would have this, I just knew God was going to look over us.”

She and her son, Henry Robinson, had to go out for showers and she cooked their meals on a hotplate.

“Well I was in high school and basically we had to move here, it was a real struggle,” said Robinson. “There’s so much drive in me, all I’ve been doing is working. I go to LA and do hair for music videos. I do big hair shows. Times have definitely changed.”

Robinson now does hair in what used to be his bedroom.

Carr wants to show women especially that with the help of God they can achieve their dreams. She wants to leave her business to her son eventually. She will leave it to him in better shape than she got it, recently, completing a remodel that cost thousands of dollars. The remodel will also give her the opportunity to expand her business.

Carr said she has always had a dream to help others and has fulfilled all of her goals. Not only as a stylist and entrepreneur, but helping those who were homeless as she once was. Her advice to the next generation is simple: “Take it one day at a time, stay focused and keep the riff raff out of your life.”